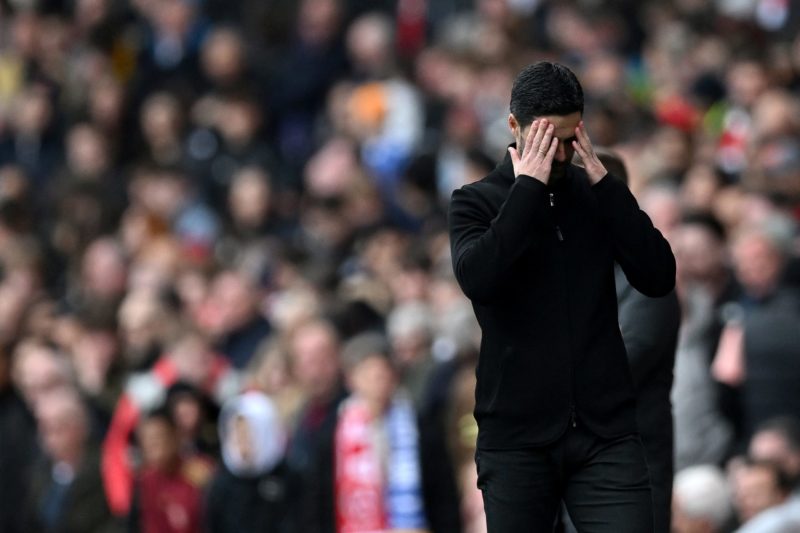 Speaking ahead of Saturday’s game, Mikel Arteta said all the right things about Arsenal.

“[Monday] happened and it happened with nine games to go and we have to react now,” Arteta told reporters.

“We have to show tomorrow the energy, the commitment and the passion that we want to play tomorrow in front of our fans.”

Arteta may have given that message to the media, but his side started against Brighton as a group of men who had never heard those words in their lives.

That game, which was to be Arsenal’s chance to get back on the winning horse, was dead after the first half thanks to Arteta’s inexplicable decision to weaken his midfield as much as possible while ensuring that the left-back role was weakened even more than it had been with the loss of Kieran Tierney.

How now can there be a way to reclaim Nuno Tavares’ confidence after he was dropped twice and then replaced in the squad by Granit Xhaka, who showed no positional intelligence for the role, and then Gabriel Martinelli , which is just as much left back as I am a frog?

“His confidence probably wasn’t the best because he wasn’t playing many minutes and he needed pace, competition and understanding with his teammates,” Arteta said of Tavares before the game.

“We have to help him do that.”

Benching him against Brighton to play Granit Xhaka certainly seemed like an odd way to go.

The fact that Arsenal find themselves falling apart because they lost two players to injury is further testament to the mismanagement that took place at the club in January.

No top club should have such a thin squad, with a manager who is seemingly unable to manage players in more than one style – authoritarian.

Do as I say or you don’t play!

Moving Granit Xhaka from left-back to midfield was key to Arsenal’s improvement in the second half, as we all knew, but putting Gabriel Martinelli at left-back?

Why was Xhaka even there in the first place?

Why was Emile Smith Rowe eliminated while Alexandre Lacazette was so peripheral throughout the match?

Why leave Lacazette on when you take off Gabriel Martinelli?

Why does Lacazette start ahead of Eddie Nketiah when Eddie was much more effective in front of goal in 10 minutes than Lacazette in an age?

Even though Nketiah isn’t the long-term solution to Arsenal’s striker problem, he can’t be worse than Lacazette given his current form.

So. A lot. Questions.

I want to be behind Arteta, really. I was happy to admit I was wrong as we began our run, looking like we were going to sail into fourth place with games to spare.

But what about a rookie manager whose team seems to fall apart when things aren’t as perfect as their hair?

Arsenal should have capitalized on Manchester United’s abysmal performance against Everton earlier today.

Instead, they set up in such a way that they competed with Ralf Ragnick’s men for the ‘worst performance of the day’.

I don’t want to hear Arteta and Arsenal how the last five minutes showed us anything.

I want to know why the first 85 was so bad and how they plan to fix it, urgently.

“Really poor again. The reaction we wanted to show, we didn’t do on the pitch. The first chance they had, they scored. We created a cold atmosphere but when we tried to change it, it was too late.

“We looked at each other too many times instead of taking ownership and doing what we had to do. You can’t play like that.

“(We felt) If it’s taking too long and there’s any doubt then it will be a goal. It wasn’t. It was a decision we needed because it was probably the best time in the game to try and change the momentum of the game.”

Mikel Arteta on Xhaka at left-back

“Mostly because we thought this space was going to be there for Granit to use, but we didn’t use it.”

Mikel Arteta on what appears to be the crowd