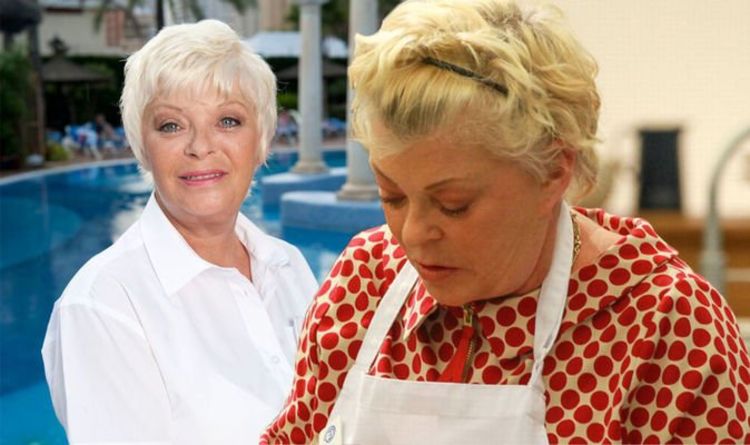 Crissy Rock, 63, spoke exclusively to Express.co.uk about her own experience of menopause as she prepares to wow audiences in February with her performance in Menopause the Musical 2. Arriving as a sequel to Menopause the Musical, which has been described as the “ultimate girls’ night out “, the show is set to embark on a six-month tour of the UK and Ireland this spring with Crissy in the lead.

Crissy, who is probably best known for playing Janey York in ITV’s Benidorm, will certainly not shy away from broaching taboo subjects during her tour, covering everything from hot flashes to memory loss, to how they look. naked.

Discussing how the show spoke about her own experiences of menopause, Crissy said: “My favorite line is when I do this monologue where I say, ‘I’ve always been everybody’s earth mother. and that everyone always comes to her for love and happiness…

“But when this menopause hit me, I found myself standing in the kitchen with a spatula in my hand, screaming!”

“I was like, ‘Oh yeah, I’ve been there, I’ve done that.’ Went from zero to 60 in seconds And it comes off your fingernails like an elevator You know, like one of those elevators in America that goes “whoosh”?

“You get into bed and you think… ‘I’m roasting!’ Everyone is freezing with balaclavas and you are shouting, “It’s hot!

The I’m A Celebrity… Get Me Out Of Here! The star went on to explain how the sudden changes brought about by menopause can be “terrifying”.

She said: “You are afraid to cough, to sneeze, to sit down, to stand up, to urinate, you sweat, you cry… And you don’t even know why you are crying! You’re just watching an ad on TV!

“That’s just all. Your hair is like straw, your skin doesn’t suit you anymore, my teeth look happier in the glass than me. I’m like, ‘What’s going on?’ she laughed.

On what she finds most liberating, Crissy added, “Years ago you couldn’t wait to come in and take your shoes off.

“Now it’s your bra.” You keep your shoes on and the first thing is your bra.

“You go, ‘Take that off! It’s like a straitjacket on me!”

Menopause the Musical, which first premiered in Orlando, Florida in 2001, sees four women discuss friendship, love and menopause – while shopping for lingerie at a Bloomingdales mall sale.

This new musical will explore the lives of the same four characters five years later, where they set out on the high seas with no way of escaping.

During the interview, Crissy expressed her gratitude to the show’s producer, Robert C Kelly, who has worked with talents such as Elaine Paige, Jane McDonald, Joe Longthorne and Beverly Callard over the years.

Crissy appeared in Benidorm between 2007 and 2011, and starred in the 11th series of I’m A Celebrity… Get Met Out Of Here! the same year, she left the series.

However, the comedian also stayed in the comedy circuit for a long time after that, making a name for herself in the stand-up world.

Permanently residing at Harrah’s, Las Vegas, Menopause The Musical has been seen by over 12 million people (mostly women) worldwide, with a New York Times reviewer saying, “It’s impossible not to laugh!”

Menopause The Musical 2 is on tour in the UK and Ireland from February.

For more information on the show, please visit www.menopauseuk.com.