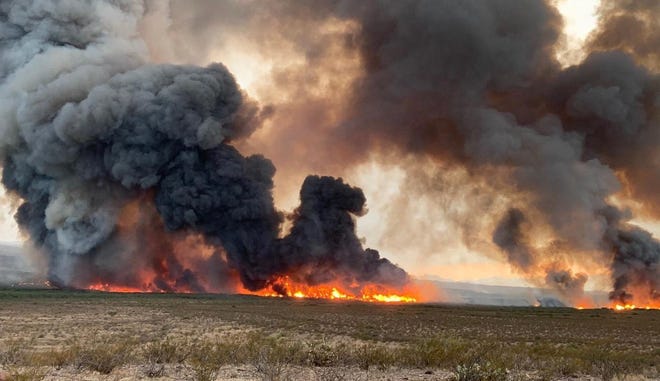 A lightning-caused wildfire, dubbed the Bottom Fire, has burned more than 3,000 acres since it began on Monday in an area about 7 miles west of Bylas, fire officials said Thursday.

The fire was discovered burning in a dry riverbed of the Gila River on the Apache tribal lands of San Carlos, according to InciWeb, a forest fire tracking website operated by the US Forest Service.

The brush, tall grass and chaparral shrubs of the area are the main sources of fire fuel.

Menu:Here’s where Arizona wildfires burn in the state

Winds in the region increased fire activity until heavy rains eased the blaze area on Thursday afternoon. Due to an early monsoon surge, humidity levels are expected to increase due to scattered showers and storms expected throughout the weekend.

Fire crews strategize to build indirect fire lines – a cutoff in potential fuel sources – in front of the main fire. Teams will use bulldozers to clear dense vegetation in the river corridor and pay special attention to protecting the area’s cultural resources, such as eastern Arizona rail infrastructure, according to InciWeb.

Smoke from the background fire will remain visible to many communities in the vicinity of the fire, and people sensitive to the smoke with respiratory problems or heart disease are encouraged to take precautionary measures.

What we know about the Arizona wildfires:Walnut Fire reaches 100% containment

An interactive smoke map is available for the latest information on Bottom Fire smoke at Air Now. The public is asked to stay away from the fire area.

Best Xbox exclusives you must own