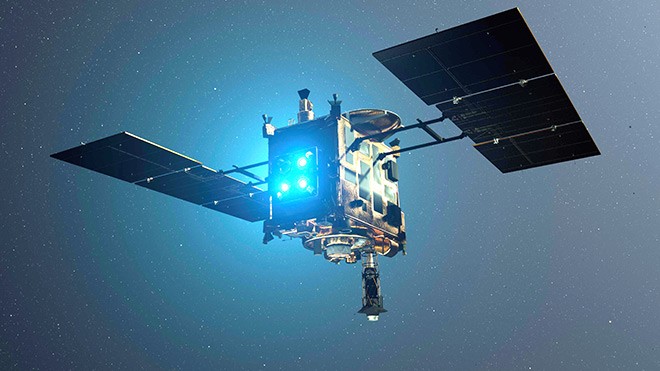 The findings will likely help support the theory that the origin of life on Earth came from outer space.

In December 2020, Hayabusa 2, an asteroid explorer operated by the Japan Aerospace Exploration Agency, launched a capsule over Australia containing approximately 5.4 grams of soil and rock samples taken from Ryugu.

The JAXA research team announced in June 2021 that it would distribute these samples to research institutes around the world to initiate large-scale analysis.

In their preliminary analysis, the researchers found carbon and nitrogen, constituents of organic substances, in the soil samples, suggesting that they may also contain amino acids, which make up proteins.

The sources said the samples also contain other amino acids such as glycine, a constituent of collagen, and glutamic acid, an umami flavor component.

It is believed that these amino acids were abundant on Earth immediately after its formation 4.6 billion years ago, but were lost after the planet was covered in magma.

The latest discovery will likely bolster the theory that the amino acids that exist on Earth today were brought by meteorites that rained down on the planet after it cooled.

Previous analyzes of meteorites found on Earth have also shown that they contain such amino acids, but these may have come from Earth because the meteorites were exposed to the planet’s soil and atmosphere when they collided. with the planet.

The latest analysis of samples recovered from Ryugu, orbiting Earth and Mars, was performed without exposing them to Earth’s air, meaning researchers have confirmed for the first time that the building blocks of life also exist. in the space.

Hayabusa 2 is the successor to the Hayabusa space probe which, for the first time, successfully landed on a body other than the moon and brought back collected particles.

No amino acids were found in the samples Hayabusa brought back from the Itokawa asteroid and those from the moon.