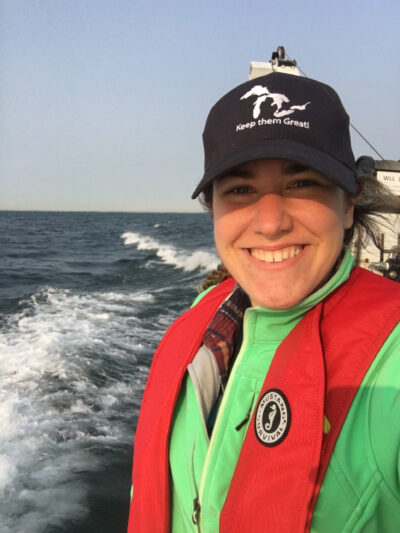 CIGLR staff member feels at home on the water

Holly Kelchner has a tattoo on her foot that connects her passions and approaches to life.

The microscopic plankton tattoo is a testament to her work with the Cooperative Institute for Great Lakes Research, her research in Alaska and along the African coast, and how she behaves in general.

“Plankton comes from the Greek root planktos, which means to wander or drift,” said Kelchner, an aquatic ecology research analyst at CIGLR. “I feel like that’s what I embody as a person. I roam and drift wherever I’m supposed to go.

Water is a great place to drift, and Kelchner’s life and career have been defined by what’s on the surface and what’s below.

She grew up in Minnesota and her family owned a cabin on the Outer Banks in North Carolina. Frequently visiting a place kissed by the air of the Atlantic Ocean left a lasting impression.

“From a young age, I would go out to visit the ocean and live in a house that overlooked the ocean and fall asleep on the ocean,” she said. “It was the center of my childhood.”

She cites scuba diving as one of her many passions. Her father was a diver before he was injured shortly after Kelchner was born, and he shared stories of his scuba diving adventures to ignite a spark within her.

At the age of 20, she received her certification in the same lake where her father obtained his. Around the same time, she moved to Alaska to study marine biology at the University of Alaska Southeast and made some memorable dives while there.

“People thought I was crazy because I loved it. It’s cold diving,” she says. “To date, I think those dives in Alaska have been some of my best dives, even compared to warm coral reefs in other places around the world, simply because of the vibrant color of all the invertebrates.

“I didn’t get certified in nice tropical weather, which is where most people get certified. I did this in a cold lake in Minnesota where the visibility made it hard to see your hand right in front of you. Then I moved to Alaska to dive with the sea lions and all those cold water invertebrates.

She was then pursuing her master’s degree at Louisiana State University. His graduate adviser left for Michigan after accepting a position with the National Oceanic and Atmospheric Administration through the Great Lakes Environmental Research Lab and helped Kelchner secure a volunteer position at GLERL.

A big part of the allure of leaving Louisiana for Michigan was the pull of the Great Lakes.

“When I was in Mozambique, I was on the water every day,” she said. “When I came back to Louisiana, I missed it so much. That was the main driving force behind me coming to Michigan – getting on boats and training on the water. That’s where I feel the most at home.

Kelchner actually wants to make water his home one day. She has recently started sailing and plans to make it a long term business. She worked last summer with the North Cape Yacht Club on western Lake Erie and was hooked.

“I love being on the water,” she said. “There’s an entirely different time scale to how things happen when you’re on the water. You are more aware of your senses, you watch where the wind is coming from, its strength and its impact on the water. You look at all these different things to manage your balance on the surface of the water.

Kelchner said her interest in sailing was piqued in Louisiana when a member of her grad committee told her she lived in South Africa and sailed to Louisiana. When Kelchner tried it last summer, her instructors called it a natural.

She said she would like to sail the Mediterranean Sea one day and experience the culture and history of the region. But for now, closer to home, she said she plans to be on Lake Erie as much as possible this summer and possibly get her own boat.

“When I first came to Michigan, everyone was like, ‘The Great Lakes are a great place to learn to sail,'” she said. “I imagine myself making it a way of life. I want to make a boat my home. My partner has claimed the title of first mate, I’ll be the captain, and we’ll sail around the world and see it from home.