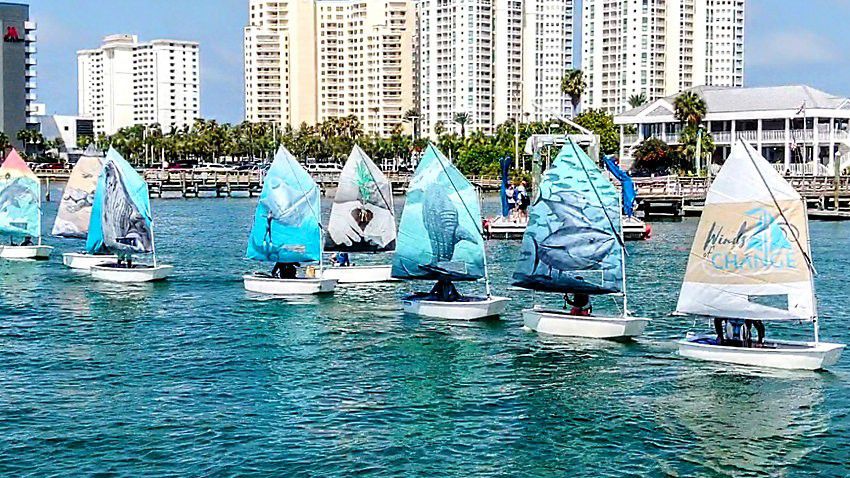 The Clearwater Community Sailing Center will hold its first-ever fundraiser for the “Winds of Change” boat parade on Saturday along the Clearwater Beach waterways.

What do you want to know

The parade will feature nearly a dozen “Street Art Sails” that were painted by students from the Gibbs High School Mural Club. The small sailboats on which they will be exhibited are intended for children up to 15 years old.

The theme of the boat parade is the low impact of shipping on the local natural marine environment.

The parade will promote the “Winds of Change” fundraiser to be held Saturday night at the Clearwater Community Sailing Center. Proceeds from the event will help provide scholarships for at-risk youth to attend a summer sailing camp or take a year of sailing lessons at CCSC.

Garret January, 14, said he learned to sail when he was 8 years old. January is training for the 2028 Olympics to compete on a hydrofoil windsurf board.

January said he was thrilled to see the talent that has grown through fundraising.

“Whether it’s at camp for the summer, or whether it’s a full race team with me,” he said. “Which is very special to me because some of the best athletes I’ve ever met in my life come from at-risk homes.”​

The parade will begin at 10 a.m. and end at noon on Saturday. The route shows sailboats leaving the beach at CCSC, looping from Clearwater Pass to Pier 60, then around the fingers behind Clearwater Beach before returning to CCSC.

Loans for low-income people Personal loans for a tight budget