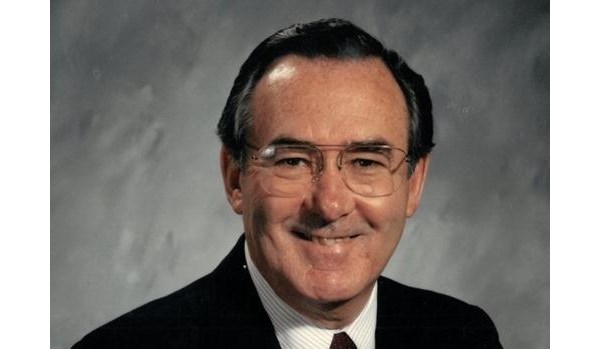 Coulson Tough
1926-2022
Coulson was born on December 7, 1926 in Detroit Michigan. At the age of eight, he experienced the death of his Scottish-born father and the end of his childhood innocence as he was proclaimed the man of the family. Although he was poor and fatherless, Coulson claimed to have had a very happy childhood, in part because all of his friends were equally poor. Coulson took the initiative among his friends to organize baseball, hockey, etc. after school. He was one of the brightest students to have had the opportunity to attend Cass Academy, where he graduated in 1944, earning the first of many honors, the American Legion. award.
He then eagerly enlisted at age 17 in the Air Force, serving in France and Germany, and by the time of his discharge he had attained the rank of Sergeant. Upon his release, Coulson attended and graduated in 1951 from the University of Michigan where he earned a degree in architecture. On a blind date, he met the beautiful and vivacious Colleen Bohn, who could always make him laugh, and after a whirlwind courtship, they were married. The two were kindred spirits, sharing a fearlessness that welcomed new challenges. When Coulson got the call from the young man from Go West, Colleen was on board immediately and they honeymooned in Burbank, California.
Coulson began his illustrious career as an architect with the University of California system, moving to different campuses as Coulson’s skill, precision, vision, work ethic and dependability were noted and valued. . He was named lead architect in the construction from scratch of the UC Irvine campus.
Coulson and Colleen lived their lives to the fullest. They spent long sunny days at the beach with friends and their toddler son, Bruce, bringing picnic baskets and playing volleyball and soccer. Coulson learned to sail, joined the sailing team, and eventually taught Bruce to sail. In the evening, they organized barbecues and cocktail parties for friends and family. Their family was complete when their daughter, Cindy, was born. It was a fabulous life!
In 1968, Coulson was hired as vice president of facilities and operations at the University of Houston, where he led the renovation and construction of several campus buildings. Coulson also traveled to several South American universities to consult in campus design and construction.
In the early 1970s, Coulson met with George Mitchell to discuss developing a UH satellite campus, similar to the one Coulson had opened in Clear Lake. Mitchell expressed interest in hiring Coulson; in 1973 Coulson joined Mitchell’s dream team which developed The Woodlands. Coulson also oversaw numerous construction and renovation projects to revitalize Galveston for Mitchell. Coulson’s fingerprints can be found in The Woodlands as he was associated with around 130 projects. It was also Coulson who led the outdoor sculpture program. After retiring at age 77 as Senior Vice President, George Mitchell hired him to oversee the construction of the Texas A&M University Physics Building.
Coulson was a founding member of TW Community Presbyterian Church, elected trustee of Conroe ISD, served as president of the S. Montgomery Cty Chamber of Commerce, founded the local Rotary chapter, and served on several boards. Some of his proudest honors have been being chosen as a hometown hero, having a school in The Woodlands named after him, being selected as a Fellow of the American Institute of Architects, and receiving a Rotary Paul Harris Fellowship Award.
Coulson is predeceased by his dear wife, Colleen, and precious daughter, Cindy, his parents, Stewart and Mary Jane Tough, and his siblings, Stewart and Agnes Tough. He is survived by his beloved son and best friend, Bruce, his daughter-in-law, Diana, his grandchildren, Alex Grunenfelder, Madison, Tara, Abby and Sydney Tough, his nephews and nieces, his Scottish cousins and good friends, like Cary Lindsay. A visitation will be held on Thursday, February 3, 2022, from 5:30 p.m. to 8 p.m., at Forest Park Funeral Home, located at 18000 Interstate 45 S, The Woodlands, TX 77384. A service will be held on February 4, 2022, at 2:00 p.m. at the Presbyterian Church community TW, located at 4881 W. Panther Creek Drive, The Woodlands, Texas 77381. Thank you so much for the loving care of Cassie, Tina, Shawanda, Deja, Adriene, etc. to Tina Reed’s Caring Hands. In lieu of flowers, memorials may be donated to the Coulson Tough Memorial Fund at TW Community Presbyterian Church.

Published by Houston Chronicle on February 3, 2022.

To plant trees in memory, please visit the sympathy store.