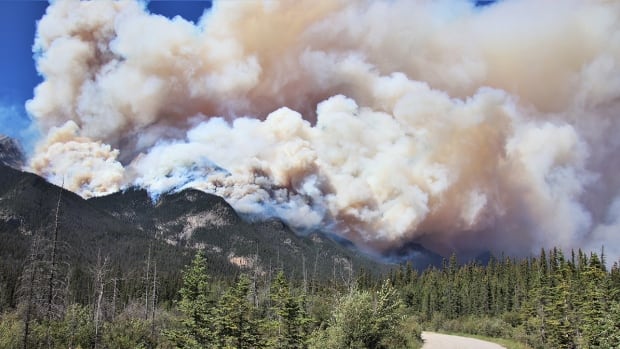 Crews work to put out a wildfire in Jasper National Park

Fire crews are still trying to put out a large wildfire in Jasper National Park that has been burning for two days.

Lightning sparked a fire on Chetamon Mountain around 1:30 a.m. Thursday, and it had grown to more than 400 hectares by Saturday morning, the national park said in a social media post.

The fire is well north of the town of Jasper – about 315 kilometers southwest of Edmonton – and is spreading mainly northeast, away from the community. No nearby communities are at risk, the post said.

On Saturday morning, Environment and Climate Change Canada released a special air quality reading for the Jasper area, as well as the Hinton-Grande Cache area, which are however still in effect.

A thick plume of smoke, moving through the Hinton area, is causing poor air quality and reduced visibility, the statement said.

People in the affected area may experience an increased cough, throat irritation, headache or shortness of breath, the weather agency said, adding that children, the elderly and people with heart or lung conditions are particularly at risk.

Friday, Parks Canada closure of Snaring and Celestine Lake roads and the surrounding area, including nearby campgrounds. They too restricted take-off and landing of an aircraft at the Jasper airstrip, according to two separate bulletins issued by the agency.

Parks Canada cited public safety during firefighting as the reason for the actions, according to each statement.

Anyone violating the restrictions could be fined up to $25,000 under the Canada National Parks Act, according to the releases.

The fire is burning on the upper slopes of the mountain, making it inaccessible to firefighters on the ground, according to Jasper National Park.

Helicopters and air tankers worked to put out the fire from above. On Saturday morning, “specialty fire crews” began fabricating fire lines to protect the Jasper Municipality power line.

Parks Canada will have a National Incident Management Team in place Sunday to assist with emergency response.

The fire is located outside the Alberta Wildfire Forest Protection Area, but the agency is assisting Parks Canada, according to the provincial forest fire dashboard.

There are about 50 other active wildfires across the province, according to the dashboard.

Alberta Wildfire has placed most of Alberta, including Jasper National Park, under notice of fire bans, restrictions or prohibitions.