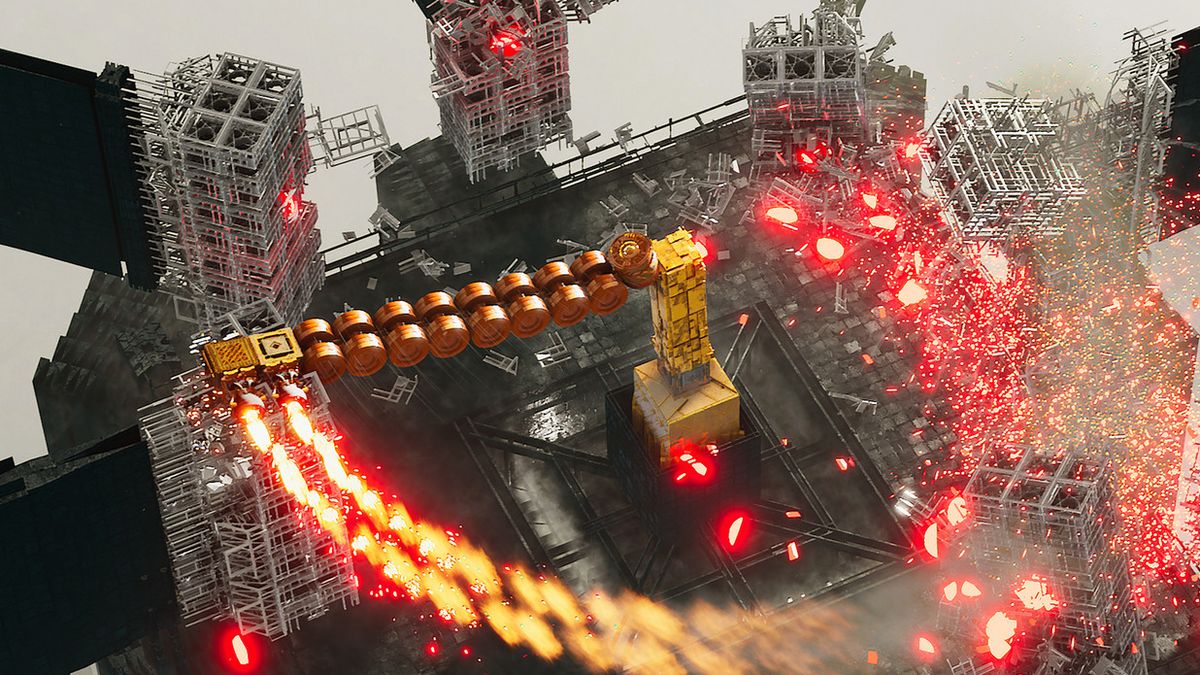 Recently I tried the physics sandbox Instruments of destruction, where you build the demolition machines of your dreams – vehicles covered in spinning saw blades and oscillating wrecking balls – and race them through puny, defenseless buildings. It’s a good time, perhaps unsurprisingly as it comes from Radiangames, founded by Red Faction lead tech artist Guerilla.

Here in Shelters, which launches in Steam Early Access this week, the concept is a bit different. This time you are not building vehicles to destroy brutalist architecture, but creating your own standing structure from various parts and parts. Then, once you’ve tinkered with your killer building, use it to take down everything else.

At first, you start with a few tall beams and super heavy cubes that can be stacked and then knocked into a nearby building, smashing through walls and floors like a collapsing crane. But soon, you’ll be able to add moving parts to the mix: a rotator that can be attached to the base of your structure so you can swing it around like a mighty steel arm. And eventually, you’ll add lasers that cut through concrete, bombs that can explode and destroy retaining walls, and even a rocket booster that can send part of your structure flying through the air like a missile.

There’s even a level where you can cobble together blocks and drop them onto a ramp where a giant piston is waiting to propel them into and through a pile of waiting structures. Kablooie.

The physics-based destruction effects are all very nice as buildings shatter and crumble, but there’s also a very chill vibe to Abriss. Can using a rocket to launch a beam of heavy metal through four skyscrapers, shattering them completely, really be soothing? I wouldn’t have thought that, but it’s really relaxing to tinker around with a few pieces and then watch how they completely reduce some buildings to rubble.

In Abriss (which is German for demolition), you’re judged by how much you have left after activating your structure, and it’s a simple click to reset each level and try new methods if you want to become more efficient or achieve a total Kill Score of 100%. It also helps that anything red and shiny on a building will explode on impact, so even if you miss a bit with an attempt, there’s a good chance it’ll all be destroyed anyway. Sandbox mode lets you play with different layouts of buildings and structures, adjust physics speed, and turn gravity on and off.

For my money, nothing quite beats lasers, searing rays of death that cut through metal and mortar like the world’s longest lightsaber. Attach a rotator block and they’ll spin, sizzling their way through anything in front of them. Slice one floor at a time or stick together a bunch of lasers with connecting blocks to lay out a swirling path of destruction.