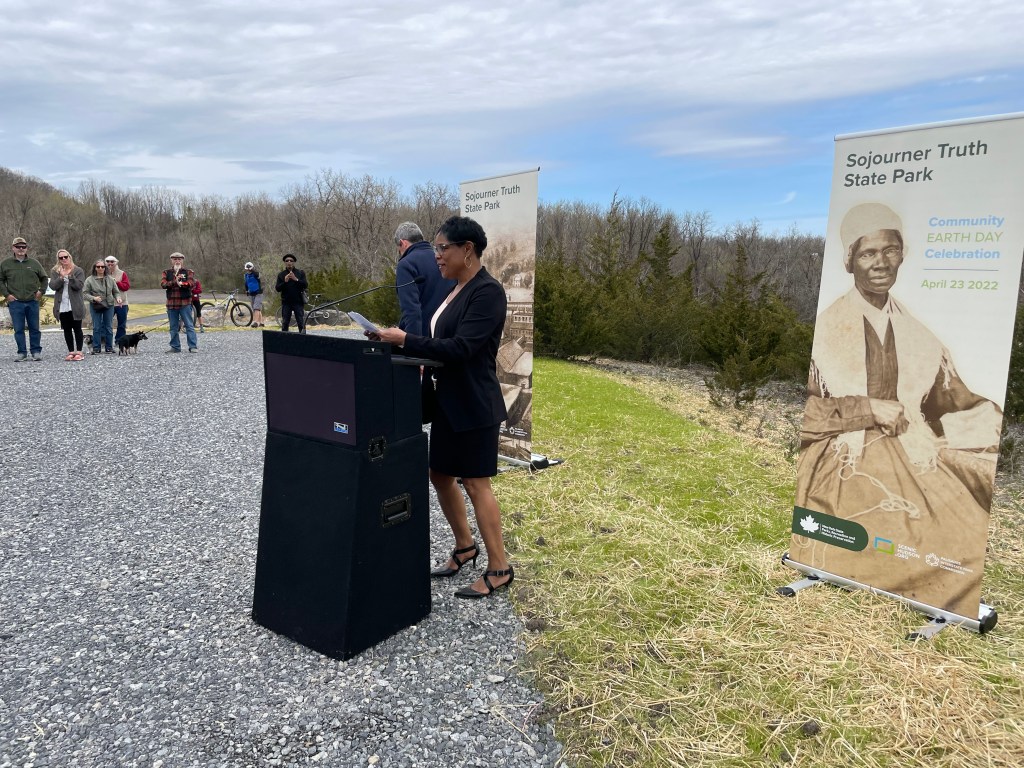 Allen, of Battle Creek, Michigan, was on hand for the opening of the new Sojourner Truth State Park. The park covers 500 acres on the sites of former brickyards, a quarry and a cement factory on the banks of the Hudson River and straddles the city of Kingston and the city of Ulster. Allen was a special guest of Scenic Hudson, which operates the park for the state under a five-year agreement.

“She may be gone, but her spirit is still there,” Allen said after delivering a keynote. She wrote a children’s book, “Remembering Great Grandma”, about the truth.

Truth was born in 1797 in the town of Esopus as Isabella Baumfree and was one of seven slaves owned by Johannes Hardenburgh. She was sold around the age of 12 to John Ignatius Dumont, who operated a farm in the present town of Esopus.

She left Esopus in 1826, after Dumont broke his promise to free her, and took her baby girl and walked 11 miles to Poppletown, New Paltz, where she was taken in by the VanWagenen family in a community Quaker. In 1828, a year after slavery was abolished in New York, Truth became the first black woman to win a lawsuit against a white man when she sued Dumont for illegally selling her 5-year-old son to a slave owner from Alabama.

The park has a network of trails that juxtapose natural and man-made landscapes as nature has found its way to slowly reclaim the industrial site. Some buildings and an old kiln survive, while derelict silos long visible to drivers on the Kingston-Rhinecliff Bridge, visible from the park to the north, have been demolished. A paved path connects the industrial site to the Empire State Trial, and a gravel path reaches the waterfront at a site where barges would have docked to load gravel from the quarry.

Evelyn Clark led a site blessing for those present.

Scenic Hudson officials celebrated the chance to “reconnect all people to this site, with a spirit of love for the land and for each other.”

“Now is a season to restore the land after 150 years of people working here,” Scenic Hudson President Ned Sullivan said, addressing the large crowd in attendance. “We honor the people who worked here, who cut the ice on the Hudson who made the bricks and the cement, they had their day and had their season and we honor their work.

“But now is the season to restore the land so that the natural habitat, plants and animals displaced over these 150 years of industrial operations can return and thrive.”

Standing on the concrete docks by the river, Steven Woods, director of education for the Hudson River Maritime Museum, recalled the industrial era of the site and the docks that were once commonplace along the river. He noted that some of the early ones were designed so that sloops could get in and out easily when steam tugs and barges were still in their infancy and much of the material to build New York City passed through them. .

And visitors have given the park rave reviews.

Matthew “Max” Fass, who organizes the Brasskill Festival at Seed Song Farm, rode to the event on his bike on the Empire State Trail. “It’s 1.5 miles along the river. It’s so peaceful,” he said.