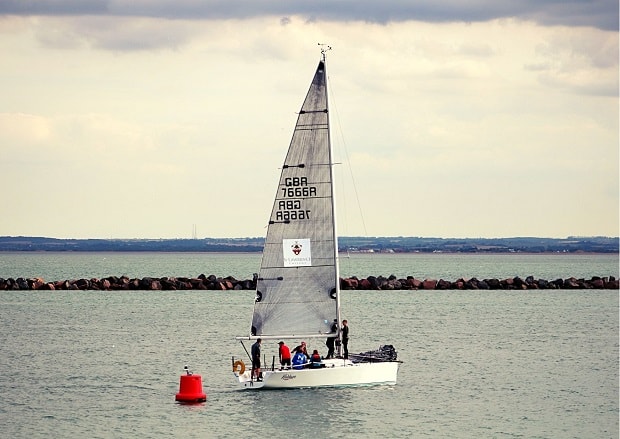 Ramsgate Week starts tomorrow (July 17) and is widely recognized as a ‘family regatta’ which is an alternative to Cowes.

It all started in 1898. During the 1950s the regatta was known as ‘Kent Yachting Week’, which became ‘Thanet Week’ in the 1970s, and at the time included dinghy sailing.

Dinghy racing has diminished over time, but with an expanded local IOR rated fleet, Ramsgate Week as we know it today has been revived and strengthened.

St Lawrence College is one of the main sponsors of the event and the school also sponsors a local crew and a Kabluzo boat which competes as part of the Class 1 IRC fleet. Kabluzo was hand built by Rob Smith and first launched in 2020.

Simon Northrop, who runs Northrop Sails at Ramsgate Harbour, will be part of the eight-man crew aboard Kabluzo.

Simon was born locally and has run Northrop Sails since he was 21 years old. He has also taken part in Ramsgate Week for the past 25 years.

Sailing is in his blood as his grandfather and father also competed. Simon created his first sail when he was just 17 and it was later used by his father in the 1988 World Championships.

Northrop Sails made the sails for the Kabluzo and the crest of St Lawrence College was also incorporated.

A difficult race is the “Round the Goodwins”. This involves sailing from Ramsgate Harbour, around Goodwin Sands and then back to port. The Goodwin Sands is a 10-mile sandbar where more than 2,000 ships are believed to have been wrecked.

Simon has already won the “Round the Goodwins” race and currently holds the record of 2:45. The race takes place on Sunday at 9:55 am.

Another key race of Ramsgate week is the Gold Cup. This race closes the regatta on Friday 22 July.

Simon has won it twice before with different teams. He will be looking to score a hat-trick with Rob Smith and the crew aboard the Kabluzo.

A college spokesperson said: “St Lawrence College will support and encourage from terra firma. We wish good luck to all competitors involved next week and know it will be an unforgettable event.

Euromarine Insurance Services is the main sponsor of Ramsgate Week. A number of other companies and organizations also support the event.

Find out more about Ramsgate Week at https://www.ramsgateweek.com/