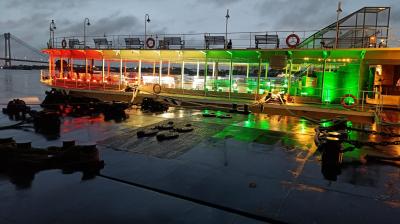 Heritage ship to sail again in Kolkata ahead of Durga Puja

Kolkata is set to witness the return of a UK-built paddle steamer, “PS Bhopal”, in a new avatar with British-era charm

Kolkata: In September, Kolkata is set to witness the return of a UK-built paddle steamer, “PS Bhopal”, which is also the first of its kind in the Indian subcontinent for its heritage value, in a new avatar with British charm. . era for the public in the Hooghly river on the eve of Durga Puja.

Built by William Denny & Company in 1944 at Dumbarton Dockyard in Scotland for the India General Navigation and Railway Company during British rule in India, the Paddle Steamer is approximately 63 meters in length and 9.2 meters in width .

She was previously used as a training vessel by Port of Syama Prasad Mookerjee (SMP), Kolkata (formerly Kolkata Port Trust) at No. 22 Kidderpore Pier. As “Bhopal’s” lease contract with the training institute ended in 2019, SMP, Kolkata – according to its chairman Vinit Kumar – wanted to renovate the vessel “which has heritage value” to open it to the public.

Subsequently, SMP Kolkata opted for a long-term charter of the vessel which was at that time in a dilapidated condition and did not have its own propulsion. The long-term lease was selected by open tender on the condition that the vessel remains the property of SMP, Kolkata for the duration of the lease.

In accordance with the terms of the lease, the “PS Bhopal” will remain in the river moored next to the shore or jetty and will be self-propelled with its own power, the SMP said. It will have exhibition space, a restaurant and a small assembly. The ship is about to be completed.

Few tests in the river have already taken place to ensure its safe operation with passengers on board. Mr Kumar said: “SMP Kolkata plans to inaugurate the refurbished vessel, the first of its kind in the Indian subcontinent, early next month.”

Although the Paddle is not operational now, the basic structure of the ship has not been changed except for new main engines with propulsion which have been installed so that the ship can navigate the river with passengers on board. aboard in order to bring the true feel of the ship when it was built in 1944.