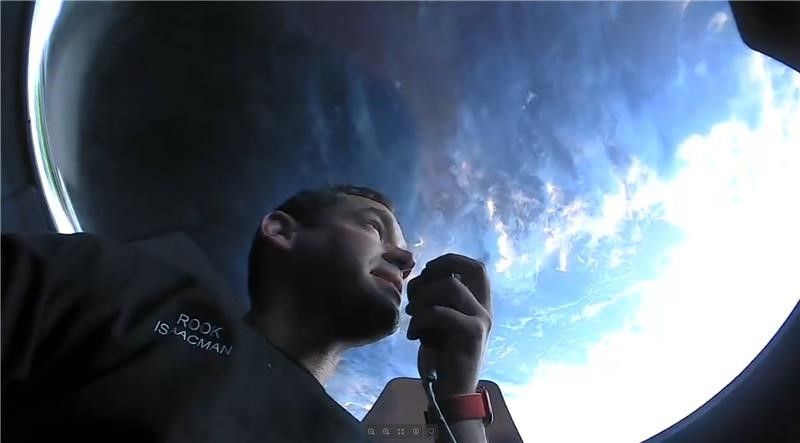 SpaceX aims to make progress in space and on Earth with its new venture, the Polaris program. And the team behind it couldn’t be more excited.

The program’s first mission, Polaris Dawn, has no set launch date, but Commander Isaacman is ready to return to the final frontier.

“I’m incredibly passionate that we can make meaningful progress towards a world we all want to live in tomorrow, while also working to meet the challenges and difficulties of today. It doesn’t have to be the same. ‘one or the other, but actually can be both,’ Isaacman said at a news conference today (February 14).

The series of three missions is named after what humans have historically called “the North Star”, which is actually a system of three different stars. The mission will see Isaacman fly alongside SpaceX employees Sarah Gillis and Anna Menon as well as pilot Scott Poteet.

“I can’t tell you how honored I am to work with such an accomplished team that I trust and deeply respect,” Isaacman said today.

Isaacman previously funded Inspiration4, which raised more than $240 million for the research hospital. He shared that he would also fund the Polaris missions.

These missions will also see the first spacewalk of a SpaceX Crew Dragon spacecraft (before a crew is launched on Starship). This planned extravehicular activity (EVA) is part of SpaceX’s push to bring new spacesuits to the table. And, as Isaacman talked about today, SpaceX is developing and testing new spacesuits that will be used during Polaris.

“There is a fantastic team of brilliant engineers working on the spacesuit. And it will be really exciting to work together as their design unfolds,” said Menon, principal space operations engineer at SpaceX and mission specialist for Polaris Dawn.

“Am I addicted to spaceflight? Isaacman said when asked if that was true. “I’ve obviously loved aviation and aerospace all my life, and I feel incredibly lucky to really be almost a fly on the wall with all that SpaceX is accomplishing and what they hope to deliver.”

And, as Isaacman shared his enthusiasm, so did the rest of the crew.

“I served 20 years in the Air Force flying the F-16. Most recently I was a director of Inspiration4, and I’m proud to be here for the opportunity to serve in as a mission pilot for Polaris Dawn,” Poteet mentioned.

“This mission is definitely going to be incredibly exciting for the new training we need to put in place to support the mission. We will learn along the way as we develop the suits, and that will help define what we are going to do for EVA training” said Gillis, an engineer, SpaceX’s lead astronaut trainer and mission specialist on Polaris Dawn.

“I am truly thrilled and honored to be part of the Polaris Dawn crew and to represent our incredible team at SpaceX. I have worked for both NASA and SpaceX and in both places have supported our astronauts in this mission. I’m thrilled to be on the other side,” Menon said.

“We are both truly supportive of each other’s aspirations and truly excited to support each other as we both go through these individual endeavors as a family,” added Menon, whose husband Anil Menon was recently announced. as a NASA astronaut candidate.

Isaacman noted that the Polaris missions will focus on research to benefit not only future exploration, but also life on Earth.

As Isaacman shared, the three Polaris missions “include a long list of scientific research and payloads with the goal of testing next-generation technologies that will support future long-duration human spaceflight and inspire the world in all the possibilities that exist in the last great frontier.”

To achieve these scientific goals, the program, which will raise funds for St. Jude Children’s Research Hospital as Inspiration4 did, will also work with the Translational Research Institute for Space Health (TRISH) at Baylor College. of Medicine, Weill Cornell School of Medicine and other partners.

And SpaceX and Isaacman believe in the future such research holds.

“This program was deliberately designed to advance long-duration spaceflight capabilities and guide us toward the ultimate goal of facilitating Mars exploration,” Isaacman said. “Perhaps one of the most important points to reinforce here is the overwhelming belief that we have that we can make progress in space for tomorrow.”

Additionally, although this is a private collaboration between SpaceX and Isaacman, the focus is still on this work that benefits spaceflight and exploration as a whole.

“It’s not just about SpaceX,” Gillis said today. “It’s really about hopefully opening up access to space for everyone.”

Are financial regulators too political or not political enough?