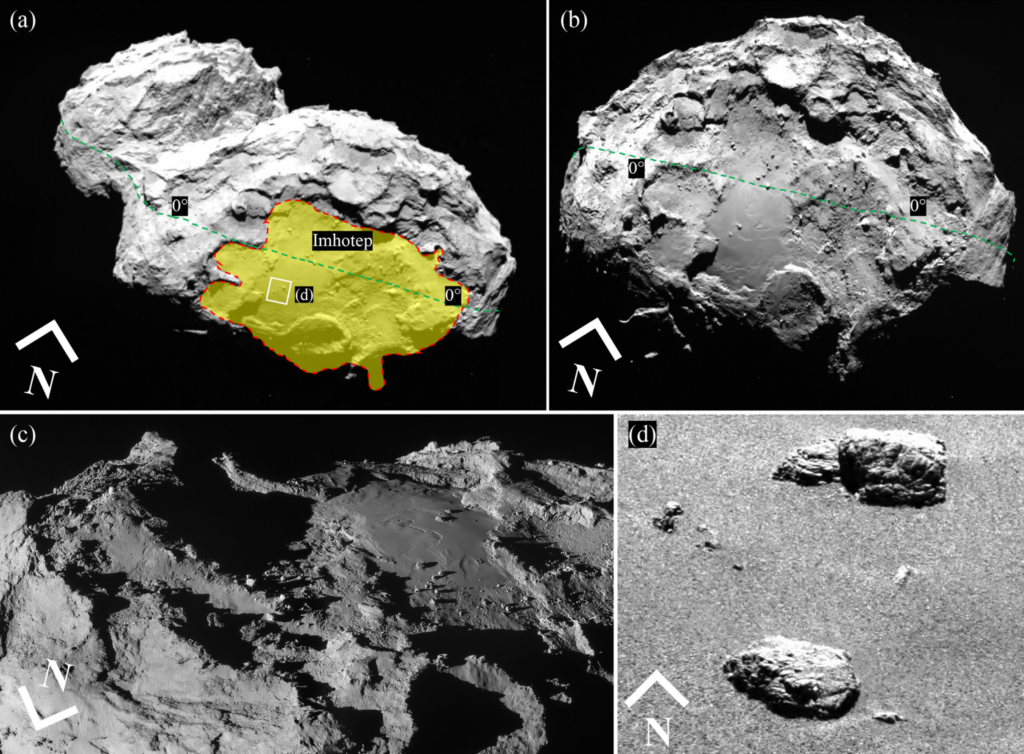 How terrain evolves on icy comets

In preparation for a possible return-in-the-future mission, Cornell University astronomers have shown how smooth terrain – a good place to land a spacecraft and pick up samples – evolves on the icy world of comets.

By applying thermal models to data collected by the Rosetta mission – which overtook the dumbbell-shaped comet 67P/Churyumov-Gerasimenko nearly a decade ago – they show that topography influences the surface activity of the comet for hundreds of meters.

“You can have a uniform surface composition on comets and still have hotspots of activity,” said lead author Abhinav S. Jindal, a graduate student in astronomy and a member of Alexander Hayes’ research group, professor associate degree in astronomy. “Topography is the engine of activity.”

Comets are icy bodies made of dust, rocks and gas left over from the formation of the solar system about 4.6 billion years ago, Jindal said. They form in the outer fringes of the solar system and have spent eternity traversing the dark, cosmic freezer of space, away from the heat of the sun.

“Their chemistry hasn’t changed much since the formation of comets, making them ‘time capsules’ preserving the primordial material from the birth of the solar system,” Jindal said, explaining that these bodies likely seeded early Earth. with water and key building blocks of life.

“As some of these comets have been pulled into the inner solar system,” he said, “their surfaces are undergoing changes. Science is trying to understand the driving processes.

As comet 67P loops toward the sun, the body accelerates to a point called perihelion – its closest approach – and the comet heats up. The Rosetta mission followed the comet as it circled the sun and studied its activity. Smooth terrain is where the most change has been observed, making it essential for capturing surface evolution.

Jindal and the researchers examined the evolution of 16 topographic lows in the Imhotep area – the largest smooth-field deposit on 67P – between June 5, 2015, when activity was first observed, and the December 6, 2015, when the final large-scale changes were observed.

The comet went through a process called sublimation – in which the icy parts turned gaseous in the heat of the sun. The comet’s smooth Imhotep region showed a complex pattern of simultaneous erosion scarps (the steep edges of arc-shaped depressions) and deposition of material.

Jindal believes that science will one day return to comet 67P. “These comets help us answer the question of where we came from,” he said.

The research was published in the Planetary Science Journal.