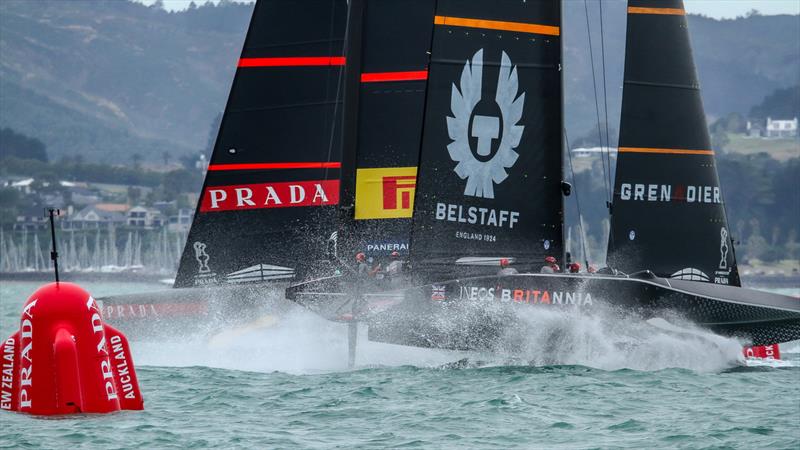 Serious and steely-eyed behind a pair of impressive black-rimmed glasses, the German designer’s appearance is softened considerably by his hairdo – an undeniably unruly swirl of pure white hair that immediately makes you think of Albert Einstein.

In conversation, he is disarmingly polite and complacent.

Fischer followed his original physics degree (where he specialized in fluid dynamics), with a doctorate in geophysics, before working for 10 years in climate research using coupled ocean-atmosphere models.

“It’s quite different [to yacht design],” he admits. “But it’s not that far – because the equations are the same. It’s all fluid dynamics, it’s just the scale that’s different.

Fischer was introduced to sailing when he was nine years old and says his love of the sport drove him to study physics and specialize in fluid dynamics.

Apart from “a bit of club racing” here and there, he says he doesn’t sail much these days. Back then, however, after graduating from the Optimist fleet, he raced Class A catamarans for 15 years, followed by another seven-year stint in Formula 17 catamarans.

Fischer has long been an established name in the professional yacht racing game and has been a go-to designer for a variety of top-flight professional sailing teams – both inshore and offshore.

Among many other projects, he was the mastermind behind the submarine appendages of Franck Cammas’ conquering Groupama 4 Volvo 70 which dominated the 2011-12 Volvo Ocean Race, he led the design team of the team of France of the 35th America’s Cup, and was central to Luna Rossa’s design program for last year’s 36th America’s Cup finalists.

On top of all this, Fischer is also responsible for the design of one of the world’s most successful one-design hydrofoil catamaran classes – the GC32.

“Originally, it was not designed as a hydrofoil catamaran,” he explained. “At first it was a foiling boat, then after the foiling reached the America’s Cup, it was decided to turn it into a foiling boat. It was a relatively easy process because it was already designed for the foils.

I caught up with him at his desk in the team’s new base at the sprawling Mercedes F1 team headquarters in Brackley, England, to find out more about his time with the British team and to ask him about changes to the AC75 design rule and their potential impact. on AC37.

Martin Fisher: Because you’re involved in the rules discussions, that’s an advantage – not a huge advantage, but an advantage nonetheless. This means that you are at least one step ahead of the rules. Also, if there are things you don’t like, you can negotiate that.

THIS : How much was your decision to join the British syndicate for the 37th America’s Cup influenced by the team’s ties to Formula 1 team Mercedes?

FM: Of course, I knew that Mercedes Formula One had been involved with the British team to some degree during AC36. But when I first contacted Ben, I was unaware of the new relationship. So of course it was a nice surprise – a very nice surprise, even. Even before that, I thought this team looked interesting, and it was the one I really wanted to join.

THIS : Thinking back to the last America’s Cup match between the Italians and the New Zealanders, from your unique perspective, was it ultimately because the Kiwis had a faster boat that they won?

It took the Kiwis a little while to figure out how to overtake once Luna Rossa was ahead. But once they learned to do that, we had no way of winning. We ran 10 races in total and of those 10 I think Luna Rossa won seven of the starts.

They [Luna Rossa] were also very good on the course – I think the separate coxswain was a good move – but the fact that we had more possibilities thanks to the bigger foils was really important. But then, later, it was only speed that won the races.

For the rest of this story, go to cupinsider.com/p/martin-fischer-on-switching-teams You will need to register.

The Fed weighed in on a digital dollar. This could cause the ball to roll.

What cruise passengers need to know