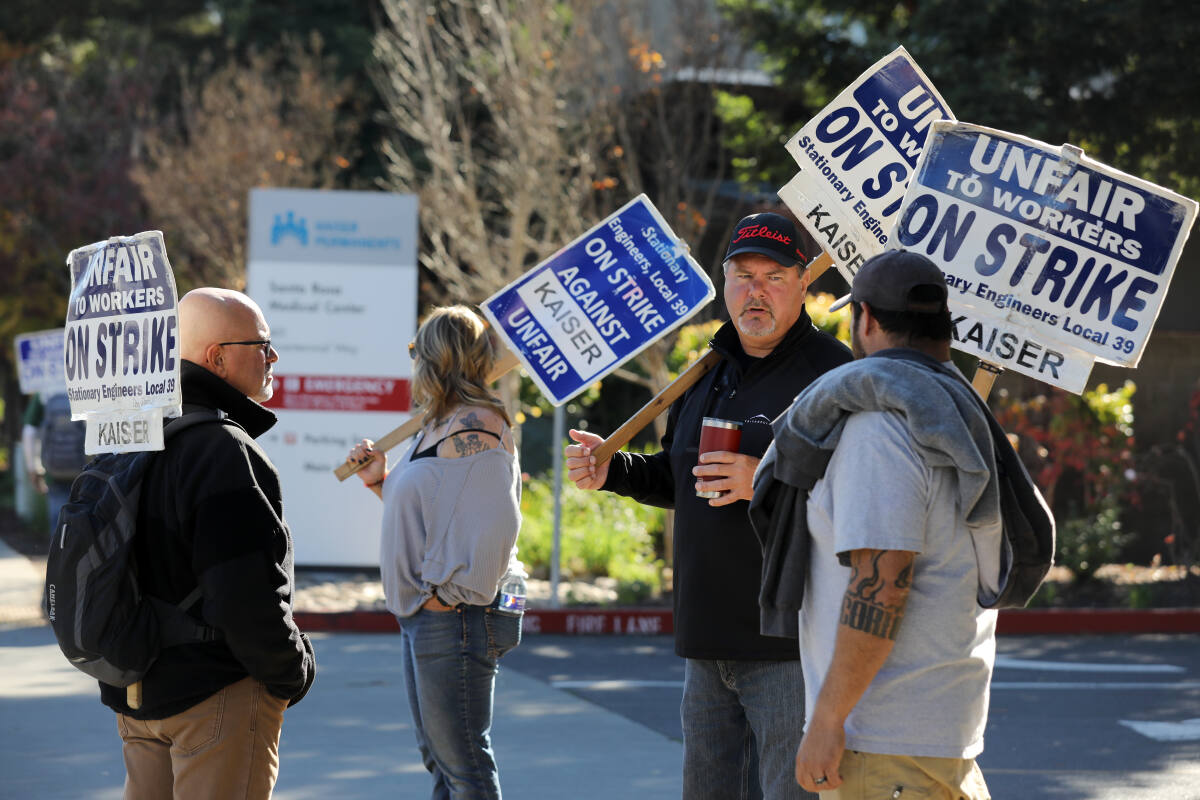 Unions representing hundreds of Kaiser Permanente workers will picket lines in Sonoma County and elsewhere on Thursday and Friday in solidarity with the engineers’ union, which has been on strike for two months against the health giant.

Q: Who is on strike and why?

A: Members of Stationary Engineers Local 39 have held a picket line outside Kaiser’s Bicentennial Way Medical Center in Santa Rosa since contract talks broke down two months ago, mainly over wages. The union maintains that its 600 or so workers are paid less than others in similar jobs in the region, while Kaiser maintains that engineers are among its highest paid employees and that his demands exceed what other members receive. union. The parties met on Tuesday and Wednesday for further negotiations.

Q: What are other unions doing?

A: Other unions want to show solidarity with engineers, so on Thursday, members of three unions representing a wide range of healthcare, office, tech and legal workers will lead a “sympathy strike” if the engineers remain without agreement. Members of SEIU-UHW, Kaiser’s largest union, will join the picket line for 24 hours starting Thursday morning, as will union members representing Kaiser’s office workers and lawyers. The California Nurses Association and the National Union of Healthcare Workers will also be picketing in Santa Rosa on Friday. SEIU is also planning to picket at other Kaiser sites in Northern California.

Q: Who else is involved?

A: The Pharmacists ‘Union and Rehabilitation Therapists’ Union reached tentative agreements with Kaiser’s management that avoided union action for them and more than 60,000 other Kaiser employees across the state. Their union members have yet to vote on whether to accept the three- and four-year agreements.

A: A representative of SEIU-UHW, Service Employees International Union-United Healthcare Workers, explained it this way: â€œWe are ready to support engineers. Other workers see what’s going on with the 700 engineers and they don’t want to be intimidated like that. They are joining other unions on the picket line to show their support. Kaiser said he believes the actions of other unions are inappropriate and may not be protected by law.

Q: What does Kaiser say?

A: â€œAs one of the largest employers of health care unions in the United States – with almost 75% of our employees working under collective agreements – we fully understand solidarity among unions. But given the demands of Local 39, in addition to the already highest compensation in the market and the highest retirement allowance of any employee represented in our organization, we believe that sympathy strikes are not appropriate in this case. We ask our staff to choose to be there for our patients and to come to work. “

Q: How will this affect me as a Kaiser patient?

A: Kaiser said physicians and clinical managers will continue to treat patients, as well as â€œtrained emergency personnelâ€. He said some non-urgent medical appointments or procedures could be affected and staff will contact patients in advance to reschedule or change appointments. Some laboratory, optometric or radiology services may be temporarily closed or have reduced hours. Members in need of treatment are advised to call the Call Center for 24 hour appointments and advice.