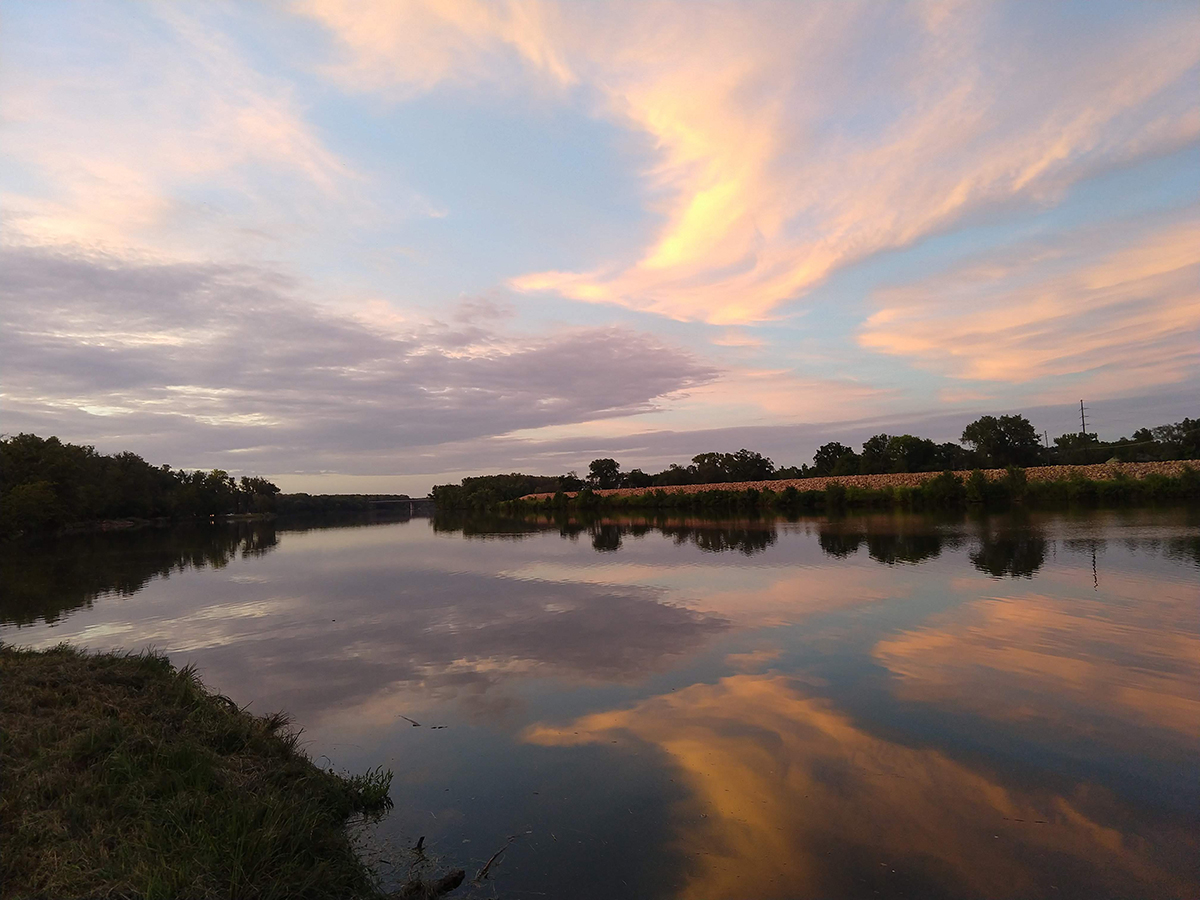 LAWRENCE – A new project based at the Kansas Geological Survey at the University of Kansas aims to help rural communities across the eastern Great Plains, including eastern Kansas, manage agricultural and water resources today and to prepare for the potential risks posed by a changing climate in the future.

The four-year project, Sustainable Adaptations to the Future Kansas Agriculture and Water Environment (SAFE KAW), is a collaboration between researchers at KGS and Kansas State University. It will aim to identify ways to protect water resources while safeguarding rural livelihoods in a region where warming temperatures and unpredictable rainfall mean that farmers and other interested parties may soon be faced with difficult decisions to balance agricultural water needs with other considerations.

The study will take place in the Kansas River Basin, from its beginning at the confluence of the Smoky Hill and Republican Rivers in Junction City to its end in Kansas City, Kansas, where the Kansas River (also known as the Kaw ) merges with the Missouri River.

“The Kansas River Corridor will be an important growth area and economic engine for Kansas in the 21st century, but the current landscape was largely developed during the 19th and 20th centuries,” said Sam Zipper, project director and scientific assistant at KGS.

The study area lies east of a symbolic line that separates the arid western United States from the humid eastern. Once established at 100e meridian, which crosses Kansas from Norton County in the north to Clark County in the south, this line moved steadily eastward throughout the 20e century. Dubbed the “New 100e meridian,” the line between arid and humid regions is expected to cross the Kansas River Basin within the next 80 years.

As the line moves, some studies predict that average temperatures in the region will rise by the end of the 21st century, raising concerns about impacts on crop productivity, water use and water quality. Potential precipitation changes are more unpredictable.

“In conversations with water managers, the farming community and environmental groups in the Kansas River area, a common concern we heard was that people wanted to make sure they were proactive in addressing and avoid the many water-related challenges western Kansas has experienced,” Zipper said.

In western Kansas, groundwater levels in much of the High Plains Aquifer portion of the state, particularly in southwestern Kansas, have declined since the use of the water began to rise in the middle of the 20e century. Dry years lead to increased water use, primarily for irrigation, which generally results in a greater drop in water levels. In southwest Kansas, average water levels have dropped more than 35 feet since 1996.

Drier conditions, even when not as severe as those found in the western part of the state, pose a considerable risk as communities adopt new strategies related to water use.

“Adaptations and changes in agricultural practices can have cascading impacts on the water quality of the Kansas River, which is a crucial source of drinking water,” said Erin Seybold, project co-lead and science assistant. at the KGS. “These cascading impacts could have beneficial or detrimental effects on water quality, depending on how farmers adapt and how the system responds to climate change. Our research will identify what combination of actions can foster positive and resilient outcomes.

“By working on this issue now, we hope to identify win-win strategies that create resilient communities while protecting water resources and positioning the region to thrive in the 21st century,” Zipper said. “To put it in more concrete terms, how much more will farmers need to irrigate, and what impact will this have on stream flow and groundwater resources? How might changes in agriculture and climate affect water quality in the region? What agricultural management strategies can help support rural communities while protecting water resources? »

Zipper, Seybold and their Kansas State University colleagues – Vaishali Sharda, Department of Biological and Agricultural Engineering, and Katherine Nelson, Department of Geography and Geospatial Sciences – will develop models based on environmental and social data to help to answer these questions. The project will focus on the complex interactions between agricultural, environmental, social and economic factors. The researchers will work with an advisory group that includes representatives from each of these sectors, including the Kansas Water Office, Kansas Department of Health and Environment, KSU Research and Extension, The Nature Conservancy, and Friends of the Kaw.

“Agriculture is of primary importance to communities along the Kansas River and is deeply connected to local ecosystems,” said Nelson, co-director of the project. “Without a balance between the needs of the community, agriculture and the ecosystem, none of these things can thrive. The future of communities and ecosystems in the Kansas River Basin depends on how people respond and adapt to changing environmental conditions.

SAFE KAW will be funded by a $750,000 grant from the United States Department of Agriculture. The study area encompasses all or parts of Atchison, Brown, Douglas, Geary, Jackson, Jefferson, Johnson, Leavenworth, Marshall, Morris, Nemaha, Osage, Pottawatomie, Riley, Shawnee, Wabaunsee, and Wyandotte counties. Although the project focuses on the Kansas River basin, what researchers learn will be relevant to farming communities along the eastern edge of the Great Plains, from South Dakota to central Texas.

The Kansas Geological Survey is a non-regulatory research and service division of KU. KGS researchers study and provide information on the state’s geologic resources and hazards, including groundwater, oil and natural gas, rocks and minerals, and earthquakes.