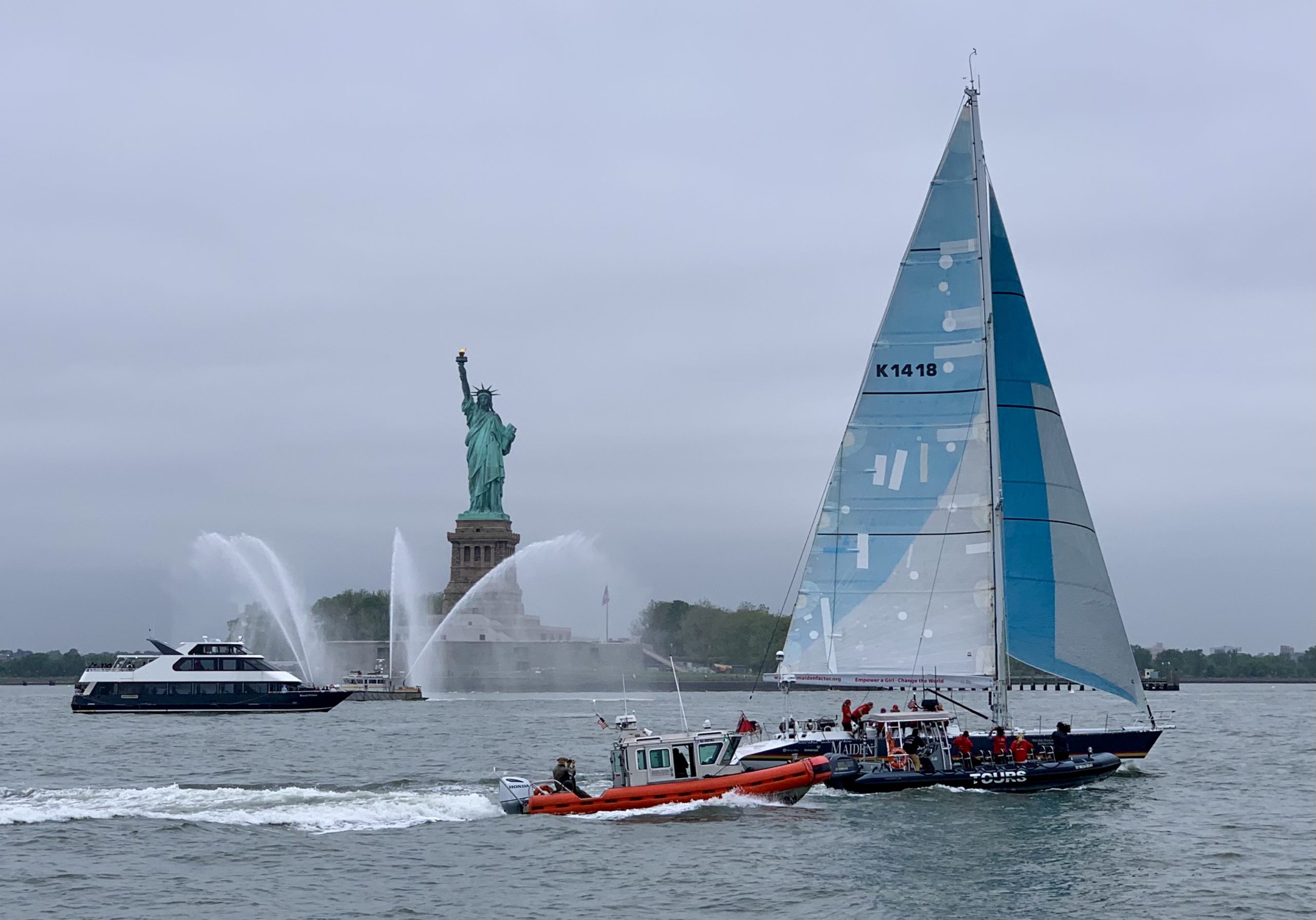 Maiden was greeted upon arrival at New York Harbor with an armada that included an FDNY fireboat. Photo: Mary Frost, Brooklyn Eagle

Famous sailor Tracy Edwards and her racing yacht Maiden arrived in Brooklyn on Wednesday, greeted by an armada that included an FDNY fireboat pumping celebratory jets of water into the air as it sailed past the Statue of Liberty .

Edwards led the first all-female sailing team to compete in the grueling 33,000 mile Whitbread Round the World Race (now known as The Ocean Race) in 1989/1990. Braving dangerous seas and overcoming rampant sexism, Tracy and her teammates came second, breaking the gender barrier for competitive sailing along the way.

“We defied the doubters and not only ‘survived’, but we won two races and finished second overall,” Edwards told the Brooklyn Eagle.

Edwards’ achievement (her results were the best for a British yacht since 1977) earned her an MBE (Most Excellent Order of the British Empire), and she was the first woman to receive the ‘Yachtsman of the Year’ trophy. “. His exploits – from his rebellious teenage years to his lifelong friendship with his mentor, King Hussein of Jordan – have been immortalized in the Sony film MAIDEN, available on Amazon. (See trailer here.)

Winning the Whitbread brought no prize money, and Edwards was forced to sell Maiden at its conclusion.

“I tracked her down in 2014 and raised funds to save her and return her to the UK where we have restored her to her former glory,” Edwards said. Maiden is now on a three-year world tour with a new mission: The Maiden Factor Foundation works with, raises funds and supports communities to enable girls’ education.

The goal is “a world where every girl has access to 12 years of quality education, empowering them to choose their future and achieve their dreams,” Edwards said.

The Eagle joined Edwards and a group of other sailors and supporters on the yacht Full Moon to greet Maiden and her all-female crew as she sailed to Brooklyn. Maiden’s sailors gracefully cruised through the harbor to the marina, where Edwards jumped off the full moon to embrace the beaming crew.

Maiden is currently moored at ONE°15 Brooklyn Marina in Brooklyn Bridge Park, where Edwards and the crew will host community events at local schools and youth groups.

“We are thrilled to welcome a sailing legend like Tracy and the entire Maiden crew,” said Marina Wharfmaster Sam Barrett Cotter. “Anyone who hasn’t seen the Maiden documentary should drop what they’re doing, get on Amazon prime, and give it a watch. It’s an incredibly inspiring story, not just about a woman breaking the gender barrier in the world sailing, but about people facing immense adversity as they conquer the most dangerous seas on the planet, and for them to stop here in Brooklyn is an honor and a privilege.

ONE°15 is hosting a fundraising event at Estuary Restaurant on Monday, June 6 where Edwards will speak. “Guests will meet her and the crew and even get to tour the boat they sailed around the world on. Our chef Dennis is roasting a Hawaiian-style suckling pig – it will be a great event,” Barrett said. Cotter (Register with EventBrite).

Other Events: On June 9 from 5 to 7 p.m., a flotilla will escort Maiden from Brooklyn to the Hudson River Maritime Museum in Kingston.

Maiden will visit the historic Mary A. Whalen ship in Red Hook, Brooklyn on Wednesday, June 22 from 10 a.m. to approximately 1 p.m.

“I watched the MAIDEN documentary and thought it was absolutely fantastic,” Cho said. “I also had the opportunity to interview him and ask him about his experience working with the crew, and eventually I also got to work with one of his other crew members, Dawn Riley.”

The young women were accompanied by the organization’s director of communications and development, Maeve Gately.

“We work with local public middle and high school students who learn to sail and build wooden boats,” Gately said. “They are learning STEM [Science, Technology, Engineering and Math] through sailing – like the physics of how a sail works or the marine life of the Hudson River.

World class sailors Paul Wilson and Brita Siepker introduced themselves and explained why they are passionate about Maiden.

“Brita quit her job and sailed around the world, and is extraordinarily committed to female empowerment,” Wilson said of Siepker. “She did all kinds of things on her travels to help children, especially girls. She’s a huge fan of what Maiden does.

Of Wilson, Siepker said, “Paul is a U.S. National Championship sailor. He saw the movie for the first time with me and also became a huge supporter. He is well known for always having women on the boat. In several U.S. Nationals, he’s had a full women’s crew – she’s another empowering woman.

“I’m here because I love Tracy and I love supporting her mission and her passion to help young women and women in general, and I love being out on the water,” former owner Jeanne Andlinger said. of the P2 superyacht. “I just want to be part of them coming in and supporting them.”

Andlinger’s friend Lee Robb accompanied her on the trip to greet Maiden.

“I love boats,” she says. “I’ve lived in the British Virgin Islands for years so this is a wonderful opportunity to be out on the water.” She added, “This is the first I’ve heard of Tracy’s story. It’s so exciting.”

“I’m here because Tracy was kind enough to give me the opportunity to donate to the cause and honor my aunt who passed away a few years ago,” John Ebbert said. “It was a great Great Lakes matelote.”

“I’m a friend of a women’s group called Women Who Sail on Facebook. We also include non-binary people,” said Anne Bryant, a resident of Brooklin, Maine, who sails a 27-foot wooden sloop. “At the end of the summer of 2020, we had a series of talks on Mondays called Maiden Mondays – there were five in a row, and we helped with the big fundraising campaign.”

“The documentary was the first time I was featured,” Bryant said. “I had no idea that Tracy had already worked on my behalf in the sailing world to ensure that I would have a place in the water.”

Mack Edwards-Mair, Tracy’s daughter, quietly oversaw the event. Although inspired by the ship and the crew, she does not sail herself, she said. Instead, she’s the events manager for The Maiden Factor, flying from stop to stop. “I’m based where the boat is.”

Can the Billion Oyster project make New York the oyster capital of the world once again?