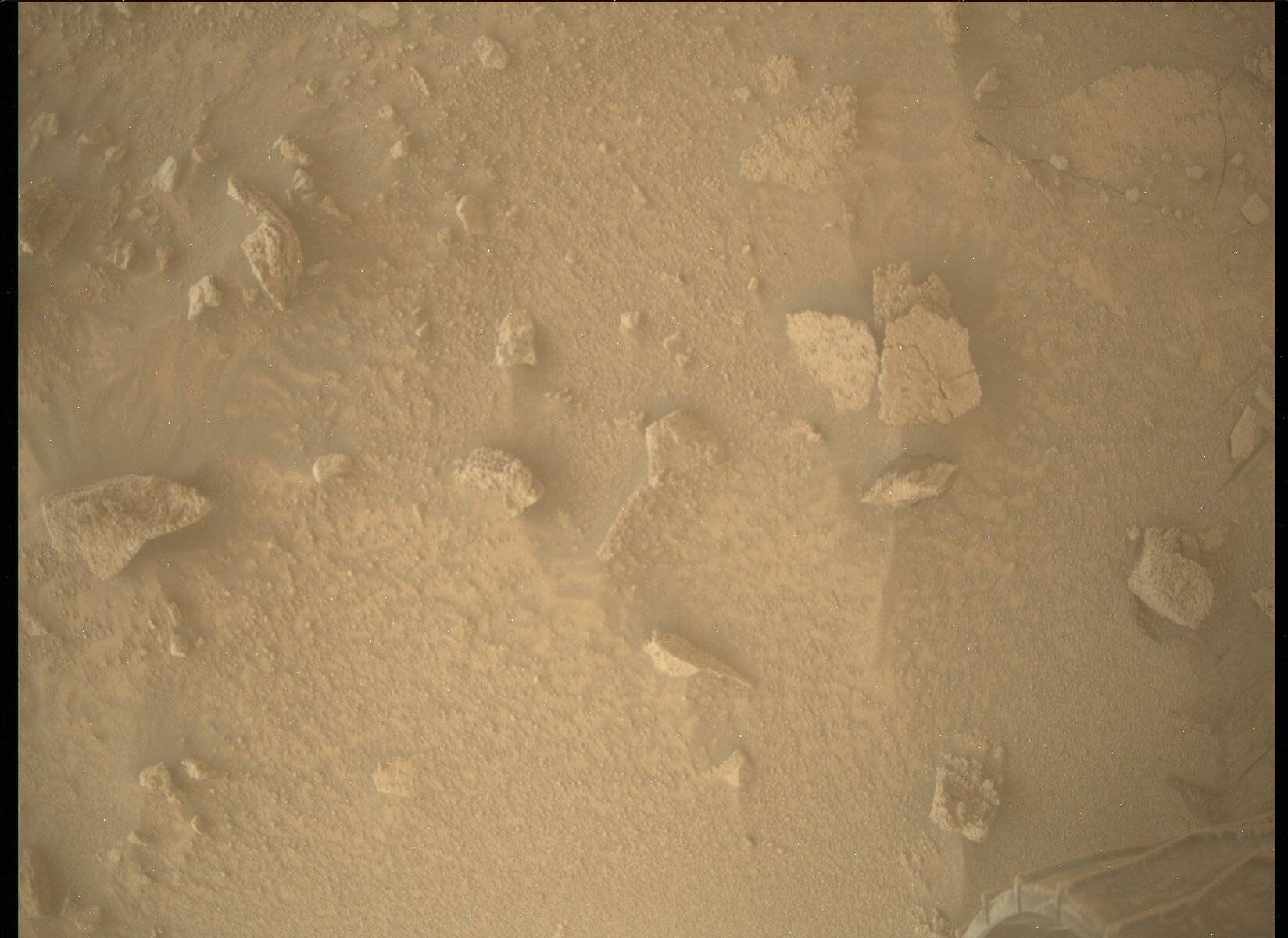 Today’s plan is jam-packed with goodies! We begin sol 3546 with a ChemCam observation of a “Deposito” sand ripple and an RMI observation of the Bolivar outcrop in the distance. Then we will do some Mastcam observations of Deposito, “Lilac” which is one of our robotic arm targets later in the ground, Bolivar and “Deepdale”. Once all of this is done, we will embark on our floor robotic arm activities!

Today I was (Keri) the Arm Rover Planner, which means I was responsible for writing the commands for the robotic arm activities in this plan. The original plan only had one set of MAHLI observations, but when I loaded our most recent images in the morning, I noticed this nice rock in our workspace. The top of it looked like a nice big flat spot where we could use our DRT to clear the dust! The scientists also thought the same and agreed, so we added it to the plan. Scientists are also interested in the rough face pointing towards the rover, so we also take MAHLI images of this “Simoni” rough face, then removing surface dust on top of the rock with DRT and taking MAHLI and Mastcam footage of Lilac.

Once the arm activities are done, we will start driving! Our Mobility Rover Planner in charge of today’s driving just got his Martian driving license a few weeks ago, so today they’re going to enjoy it by driving about 34 meters through difficult terrain! We’re driving over terrain that could potentially make communicating with Earth more difficult, in part because the high hills we’re driving through block sections of the sky where Earth or orbiters are visible. To make sure we maintain good lines of sight, they worked closely with some of the rover engineers to assess our communications with Earth and Mars orbiters, while working with the surface properties scientist who provides tips on type of rocks and types of terrain are sure. drive and which ones to avoid. There can often be a lot to juggle when driving a rover on Mars, which is why we always work as a team!

During the ride, the science team decided to add an observation that we don’t use often: a TUESDAY sidewalk observation. MARDI is a camera that points to the ground. Its original purpose was to take photos as MSL landed on Mars, but now we’re using it to take photos of the ground below the rover (image shows a recent TUESDAY sighting). A TUESDAY sidewalk sighting is when we take several TUESDAY images while Curiosity is rolling so we can get a “video” of the ground the rover is traversing. It’s like looking down while walking along a sidewalk on Earth. The science team is excited about this observation as we are riding on changing terrain. We can’t stop anywhere along the crossing, so getting this TUESDAY sidewalk video will give us close-up footage of the rocks we’re riding over. This will help the science team determine exactly when we are entering an area with different rocks. Maybe staring at the sidewalk while you’re walking seems a bit boring on Earth, but on Mars it can help us learn more about the changing terrain!

Once all of this is complete, we will take post-drive footage with Hazcams, Navcams and Mastcams which will help the next planning team determine their activities.

On the second floor, we do what we call untargeted science, since the rover will have driven to a new location by the time they happen, so we plan science observations that don’t require being in a specific location. First we let the rover autonomously select ChemCam targets, then we use Navcam to look at the rim of the crater to see dust in the atmosphere, then we look for dust devils. Later in the ground, Mastcam will make an observation of the sky. The entire plan also includes our standard RAD, REMS and DAN background observations.

US House adopts major program to fight wildfires and drought