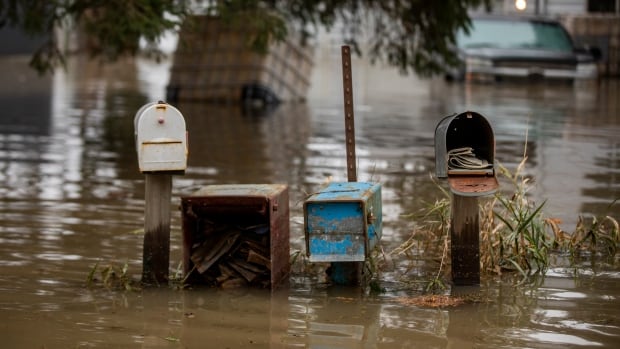 Communities in southern British Columbia are bracing for an atmospheric river to strike on Saturday, even as federal plans to help the province recover from devastating flooding and mudslides were announced.

Rain has started to fall in the area, but the heaviest precipitation is expected to arrive on Saturday evening, according to Environment Canada, which released a rain warning Friday and warned of the arrival of another storm front on Tuesday.

Prime Minister Justin Trudeau visited the community of Abbotsford in the Fraser Valley on Friday, saw the damage caused by the flooding and spoke with local officials, first responders and First Nations leaders .

Hundreds of people are staying away from their homes as a result of the disaster, with supply chains still limited and communities still facing stagnant water.

Abbotsford Mayor Henry Braun said the roughly 220 millimeters of rain falling on the town over the next five days would be a “situation they had never faced before”.

Trudeau said he saw “incredible” strength and resilience from first responders in Abbotsford, and praised the community’s efforts in the aftermath of the flooding.

WATCH | The Prime Minister visits a community hit by the floods:

Prime Minister Justin Trudeau made his first visit to British Columbia since record rainfall caused large-scale flooding and mudslides in the province. 2:54

Later Friday, he announced the creation of a committee to shape the province’s recovery from widespread flooding at a joint press conference with BC Premier John Horgan.

“It won’t be enough for us to be there now and in the weeks to come – we have to be there for each other in the months and years to come,” he said.

Highways will be proactively closed

British Columbia Transportation Minister Rob Fleming said some highways would be closed on Saturday as more storm damage is expected.

The three highways concerned will be:

Reopening times will vary depending on weather conditions, the province said.

Fleming urged residents not to travel unless they need to over the weekend, and he said large-scale reconstruction operations will take extreme weather events into account.

â€œConsider restricting your travel as we have significant weather events,â€ he said on Friday. “We need our highways to work for the movement of goods and we need to be safe.”

Merritt evacuees will be allowed to return in phases

In the interior community of Merritt, some residents are allowed to return to see how the flooding affected their homes, but others are staying away due to damage to power lines.

The return to the city of 7,500 took place on a progressive base after it was fully evacuated following the November 15 floods. Currently, residents of phases 1 to 3 of the plan can return.

More than 2,000 of the returning evacuees are subject to a boil water advisory as the city’s sewage systems remain damaged by flooding.

Donna Ray’s house has been placed in Phase 4 of the re-entry plan, which means there is no estimated time for her return. She described her future as “uncertain” as short-term forecasts threaten to cause further damage to the city.

â€œThe looming threatâ€¦ is not going to affect me wherever I am because my house is already in ruins,â€ she said. “It can’t do any more damage.”

The province says supply chains are returning to normal after extensive damage to road networks.

Federal support to clear the backlog at the Port of Vancouver, as well as fuel shipments from the United States, would have helped alleviate the shortages.

The city of Sumas, Wash., Said damage to levees from the previous storm could result in greater water flows, and the Nooksack River is expected to reach a “moderate flood” stage on Sunday.

Particular attention is paid to the Nooksack and whether it will overflow its dikes. If this happens, flooding could worsen in the Fraser Valley region.

Braun, mayor of Abbotsford, told a press conference on Saturday that he believed the city could handle the incoming precipitation after the embankment repairs.

But he also said that the bed of the Nooksack River had experienced a build-up of sediment during the last period of heavy rains, which made predicting a potential flood scenario more difficult.

“We’re going to watch the Nooksack like a hawk,” he told reporters. “We don’t plan to lift evacuation orders until the middle of next week.”

Braun said he appreciated the provincial and federal assistance for the reconstruction of the dikes in the city.

Horgan admitted that British Columbia dike management system, which is largely left to local municipalities, is flawed and needs to be changed.

“[The diking system] was a bad decision, â€he said. â€œThere has to be more than these local dollars at stake if we are to protect communities in the future. “

The prime minister said he would work with Trudeau to secure provincial and federal funding and support communities in their flood management plans.