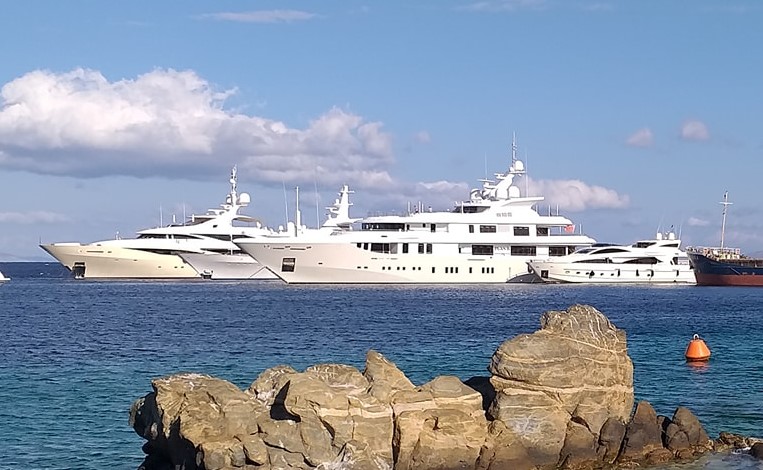 After more than six weeks of opening activities and businesses to welcome tourists to Greece, Mykonos attracts an array of private yachts. Overlooking the beach bays of Ornos or Psarou, the phenomenon has created what looks like parking for luxury ships designed for chic voyages on the water.

Last weekend, Petros Nazos, from Mykonos Live TV captured the scene in Psarou with more than 50 ships anchored in the bay.

Normal markers of an increase in tourism, such as more arriving flights, increased ferry timetables as well as rising hotel bookings, do not take into account the many private yachts crossing the Aegean Sea. . However, the increase is remarkable because it can be physically seen and counted just by looking at the water.

As an autonomous entity of transport, accommodation and often catering, yachting is a unique form of tourism which makes the impact on local economies in Greece difficult to calculate.

And why is Mykonos suddenly such a popular yachting destination?

Is there a secret boating convention known only to those who set sail – or is there something else causing moorings and anchorages to increase in the waters around Mykonos?

The island has always had a reputation for having fun in the sun and celebrity-watching by the sea, with beach clubs and restaurants overflowing with champagne, top-notch cuisine, and a clubbing scene that begins at sunset and ends after sunrise.

Many restaurants at local beaches have mooring lines in place so that their daytime patrons can tie up their ships as an added convenience to get to their meeting place. Most boats have their own tenders to transport their owners from one vessel to another.

Almost all the beaches have temporary floating docks to facilitate the embarkation and disembarkation of their passengers, to avoid sinking in the sand or getting soaked by the sea.

Safety, freedom and the heatwave are probably the three main reasons for this sudden influx. Traveling on a private yacht also limits exposure to the coronavirus, of course – far more than using commercial flights or even staying in a five-star hotel.

As everyone has become more aware of being exposed to the disease unnecessarily, if people can afford it, they will use private means rather than those available to the general public.

Freedom of movement also plays an important role in this phenomenon. On an already busy island, traveling by car to get from one beach to another can take up to 45 minutes of congestion on roads that normally take 15 minutes to travel. At sea, congestion is not a problem to go from beach to beach, even if the anchorage can be.

And as temperatures soared in Greece last week, hitting 110 degrees, everyone wanted to be near the water as an easy way to cool off. And if you’ve got a super yacht to do it, it’s not even about where you will be in a heatwave.

Greek shipping magnate Harry Vafias has been traveling the Greek archipelago since he was around five years old. Vafias has visited about half of the nearly 2,000 islands. He said: “Mykonos is my complete winner because it has the best of all worlds. It has over 20 fantastic bands of golden sand. And these beaches suit all tastes: family beaches like Lia, trendy beaches like Psarou and quiet beaches like Agios Sostis. Mykonos is also in the middle of the Aegean Sea, so if you want to go west or east it’s very convenient. ”

The owner of the AE Cap d’Antibes said the island of Rhenia, also known locally as Megales Diles, near Mykonos, is also a draw for yacht owners. Vafias noted that “Rhenia is more of a niche island, it is very small and located just south of Mykonos. It only has two or three small bays that large yachts can use, but it is very well protected against all kinds of weather conditions as the bays are quite deep.

According to Vafias, “It has some of the cleanest seas and a huge, fantastic sandy beach that is shallow for a long distance. There is nothing on the island except a few ancient ruins and the huts that farmers use when they arrive by boat to tend their livestock and land.

He added: “There are no restaurants or tavernas, so you can dine on the beach in complete solitude. It’s only 45 minutes from Mykonos by boat, so if you need a few days with a change of pace, go to Rhenia, relax and enjoy the peace and the beach. When you are bored, you can quickly return to Mykonos.

Jacob Maehren, CEO and Founder of Mähren AG, a Berlin-based real estate investment company established in 2002, said: “For me to be able to embrace and enjoy whatever is right now in my life is the ultimate success. The owner of the 145-foot-long yacht called “Forever” docked her regularly at Agios Yiannis.

His yacht was purchased at the Cannes and Monaco boat shows in the fall of 2017. He started coming to Mykonos in 2020 and by all appearances he plans to spend a weekend on the island throughout. summer.

Yachts make Mykonos their temporary home in three different ways: anchoring in a bay or offshore, attaching to a floating mooring or mooring at the island’s marina at Tourlos.

According to Dimitris Manesis, president of the Mykonos Municipal Port Fund, ships that do not dock at the port enter and leave Mykonos waters freely without paying any fees.

Multi-million dollar ships have the privilege of enjoying the waters surrounding the island without contributing to the local municipal fund.

The normal procedure for ships docking at the port is to contact the marina manager. According to Nikos Roussolatos, manager of the Tourlos marina, arrival at the port requires a call or an SMS with the date of arrival; Date of departure; the type of engine it has or whether it is a sailboat; and the length of the ship and the amount of water it draws, as well as its ports of origin and destination.

Larger yachts can be moored at the old port, putting passengers within walking distance of town, but berths there are limited to a maximum of 10. Currently, there is a Turkish tanker that has been impounded by the District Attorney for the Cyclades since March 2020 and has occupied at least six other berths.

Incredibly, Greece has around 500 ports but only 40 marinas. According to Marine Reservations, the annual fee for Greece is between $ 100 and $ 210 per foot. Nightly mooring fees can range from $ 30 for small boats to $ 100 for large yachts in low season and triple those figures in high season, normally June through September.

Mykonos Marina in Tourlos is a simple setup, and small and large cruise ships dock on the outer breakwater.

Mykonos Marina is divided into two areas. The western part is reserved exclusively for fishermen, but in the eastern part, which is intended for yachts, many fishing boats have already taken place at the quayside. Currently there are a few anchorages on the quay on the south side of the harbor. There are around 300 well-protected berths. The mooring chains were already on the ground.

Electricity and water connections can be used with a prepaid card on the south quay and a service building is located at the exit of the port. Fuel is supplied from a tanker truck delivered to the dock.

But many of the larger ships and superyachts do not turn their business over to the local municipality for port and mooring costs.

According to Manesis, the imposition of fees to make Mykonos a second home for yachts that do not moor in port and anchor off island coasts must go through national law.