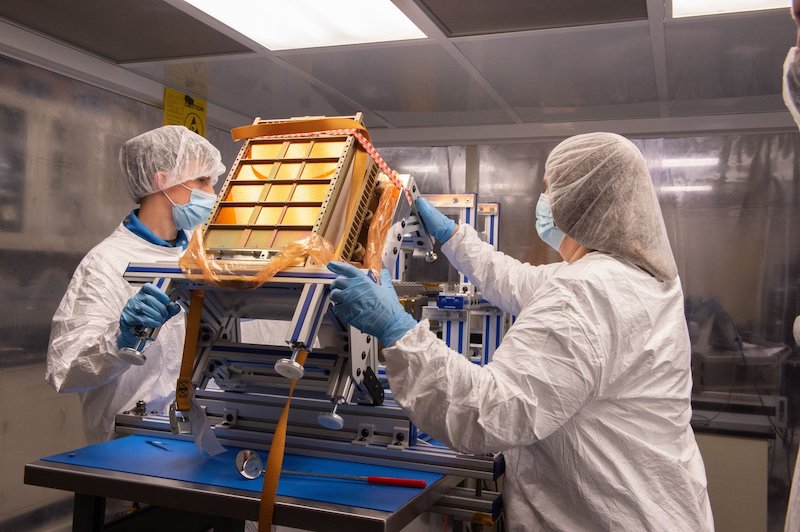 Space fans are still hoping that NASA’s long-awaited Artemis program will take off before the end of this year. The ultimate mission is a human return to the moon. But that’s not the only quest for the Artemis program, which will also allow several secondary payloads to hitchhike in space. One of them is NASA’s Near-Earth Asteroid Scout – or NEA Scout – due to launch with unmanned test flight Artemis 1 November 26, 2021 at the earliest. NEA Scout is a shoebox cubesat which will navigate space and visit an asteroid close to Earth, while sailing in the sun. NEA Scout’s journey will take approximately two years. But, upon completion, it will provide researchers with an arsenal of data on near-Earth asteroids and how solar veil propulsion works in space.

NEA Scout will be the first US interplanetary mission using solar powered sail propulsion. There have been several Earth orbit sailing tests, and now we are ready to show that we can use this new type of spacecraft propulsion to go to new places and do important scientific research.

Sail in the sun with NEA Scout

The cubesat is fitted with stainless steel alloy booms that will unfurl its solar sail when prompted. This sail is made of plastic, covered with a aluminum film, thinner than a human hair, and the size of a racquetball court. All solar sails generate thrust using the same solar physics. photons – energized particles of sunlight – reflect and bounce off the sail, creating constant thrust. It’s a slow and diminutive process, but one that can accelerate the spacecraft to high speeds over time. Johnson added:

This type of propulsion is especially useful for small, lightweight spacecraft that cannot carry large amounts of conventional rocket thruster.

Once on the asteroid, NEA Scout will use a science-grade camera to record images within 4 inches (10 cm) per pixels. The low-speed flyby here enables such high-resolution imagery, with the spacecraft moving at less than 100 feet per second (30 meters per second).

The images collected by NEA Scout will provide essential information on the physical properties of the asteroid such as orbit, shape, volume, rotation, field of dust and debris surrounding it, as well as its properties of area.

Scientists plan to use these images to study the asteroid. NASA assumes that the data obtained will help scientists understand a smaller class of asteroids – less than 100m in diameter – that spacecraft have not explored. They will use this data to determine what is needed to reduce risk, increase efficiency and improve robotic and human space exploration design and operations, Castillo-Rogez added.

While these rocky neighbors may be small, they are significant. Near-Earth asteroid detections have steadily increased over the past decade and are expected to continue to increase. Not only do they offer opportunities as destinations for exploration and in situ use of resources; they provide essential data for planetary defense.

Despite their size, some of these small asteroids could pose a threat to Earth. Understanding their properties could help us develop strategies to reduce the potential damage caused in the event of an impact.

In a declaration As of July 13, 2021, NASA wrote that NEA Scout is currently stowed inside its space launch system (SLS) at the Kennedy Space Center on the Florida coast. It was packaged in a dispenser and attached to the adapter connecting SLS to its accompanying capsule, Orion.

Artemis: A return to the moon

In case you haven’t been following it closely, the Artemis program is a really exciting new program, which will bring humans back to the surface of the moon. To date, only 12 humans have walked on the moon, half a century ago. For Artemis, the US government will work with industry and international partners to send a man and the first woman to the moon. During a press briefing on February 4, 2021, White House press secretary Jen Psaki (@PressSec on Twitter) said:

I’m very excited about it now to tell my daughter all about itâ€¦ Lunar exploration has broad bicameral support in Congress, most recently detailed in the omnibus spending bill for fiscal year 2021. And we support certainly this effort and this effort.

This statement was a great relief for those wondering how the Artemis program might work under the new administration of Joe Biden.

Bottom line: NASA’s Near-Earth Asteroid Scout, a cubesat launched on Artemis 1, will navigate space and visit a near-Earth asteroid while navigating in sunlight. Once on the asteroid, it will use a science-grade camera to record images within 4 inches (10 cm) per pixel.

Lia De La Cruz is a physics graduate and Editorial Assistant at EarthSky, also contributing as a field correspondent with a long-standing passion for space exploration that began early in her academic career. She launched her SkyFeed blog in 2018, which was mentioned in Feedspot’s Top 50 Space Blogs to Follow, published in Smore magazine and led her to launch a career in communications alongside her planetary passion. She currently resides in the South. California with her husband and her little pug.