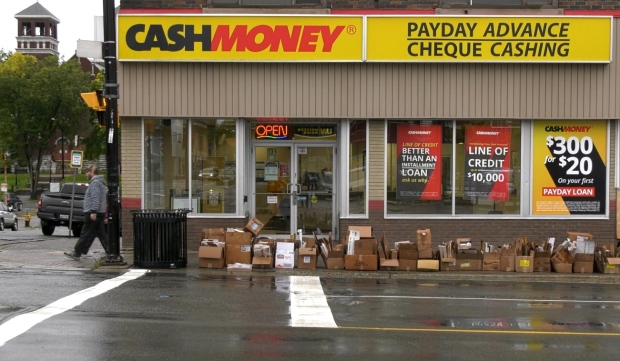 SUDBURY – Payday lenders have been a fixture on the streets of Sudbury for some time now, but things could change if Geoff McCausland’s motion passes in council next week.

Sudbury city councilor wants city staff to review regulations surrounding the industry and report back to council. Staff findings could lead to additional regulations for future payday loan outlets, including space between establishments and ensuring they are not located near social services.

“A few months ago there was a notice board when you walked into Donovan – and this is one of the areas that I represent – and the notice board was for payday loans,” McCausland said. “Payday loans are in many ways a goal for some people, but they are also a predatory form of lending for others – and often the most vulnerable in our community.

McCausland said changes to provincial legislation give cities the ability to regulate the operation of payday loan outlets through business licensing requirements.

“What I’m hoping to do is put stipulations on what’s possible, whether you can’t have two within a mile or two, or you can’t have them near. a casino or as different from a lot of things, “he said.

The Ward 4 councilor said nothing was stopping people from getting loans from multiple establishments and repaying them with each other, creating a deeper debt hole for people.

He said they can’t go back and change what has been done, but by placing restrictions on business licenses they can hopefully prevent some of those at risk from being victimized.

McCaulsand said he hopes staff will take a look at what other cities and provinces have already done in regulating the industry.

A spokesperson for the Social Planning Network of Ontario applauded McCaulsand’s efforts, telling CTV the city of Hamilton has already seen real success on this front.

“I think he has a good point with targeting, because what is often found are neighborhoods that are often targeted have vulnerable populations,” said Stephanie Ellens-Clark.

“I’m pretty excited for a councilor to tackle this piece because the municipality is taking a stand and saying, you know, it’s not OK.”

Yvonne Kelly, also a member of the Social Planning Network, said poor people or working low incomes have been known to turn to payday lenders and often pay interest rates of 391%.

“We know it’s no one’s first choice to pay this kind of interest rate,” Kelly said. “Some have suggested that provincial governments ask payday lenders to lower their interest rates, as they have asked other credit card companies and institutions. This has not happened,” said Kelly.

Ontario’s Progressive Conservative government recently lowered interest rates for those in default to 2.5 percent, but the regular borrowing rate still remains at a higher level.

Sudbury MPP Jamie West said the move does not go far enough and that Ontarians deserve better consumer protection. West said the NDP is calling for a borrowers bill of rights to protect people from predatory lending.

“The Ford government has done the bare minimum with predatory payday loan companies,” West said. “Frankly, this ‘straw man’ ad still leaves people subject to predatory loans and their sky-high interest rates. It does nothing to protect people from payday lenders who are targeting those affected by COVID- 19. “

Comply with the laws

CTV News has contacted several payday lenders, including Cash Money, and did not receive a response before the deadline.

“Payday lenders are licensed and regulated under provincial payday loan legislation and inspected by the Ministry of Government and Consumer Services to ensure they comply with all applicable laws and regulations. The industry is slipping away due to increased government regulation at the provincial and municipal levels that has forced many businesses to close. “

The association cites a survey published by the Financial Consumer Agency of Canada which shows that more than half of borrowers living in households have an annual income above $ 55,000.

“For a single mother who has a projected shortfall and needs a loan to do groceries, or a senior who needs to borrow to pay for her medication before receiving her pension check, a loan payday is perhaps the best option, ”they said.

The motion has yet to be approved by council and will be voted on at the September 22 meeting.