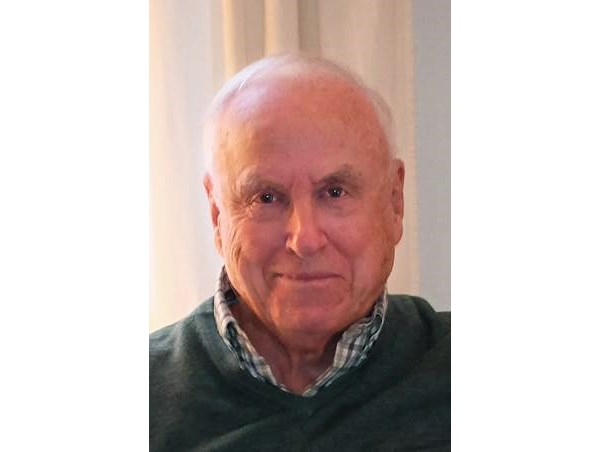 ROCKPORT, Maine – William Everett Nuesse passed away at his home on November 8, 2021, in the presence of his family. Bill was a kind man with a great capacity for friendship and easily engaged with people. For nearly 25 years, he was a urologist for hospitals in mid-coast Maine.

He was born February 5, 1934 in Turtle Lake, Wisconsin, son of William and Addie Nuesse. William Sr. was a Wisconsin banking commissioner. His family moved to Madison, Wisconsin, in 1948, where Bill began his freshman year in high school. On the first day, he wore his farmer’s overalls that were standard in a small town farming community high school, but his classmates in Madison quickly named him Hayseed. He was known as Seed to the boys who became lifelong friends. They met for a week of golf at many springs in Myrtle Beach, Hilton Head or Southern Pines.

After receiving his medical degree from the University of Wisconsin in June 1962, Bill completed his residency in urology. He spent two years in the US Air Force, stationed in Newfoundland with his wife Doris and their young family. They moved to Maine, attracted by the beauty of the coast. Bill’s maternal grandfather was a bunker in Franklin, Maine. During their marriage, the family were active members of the Megunticook Golf Club, the Camden Yacht Club and the Congregational Church. He and Doris regularly attended Bay Chamber Concert programs, hosted musicians, and instilled a love of classical music in their children.

Bill was a member of the Maine Natural Resources Council and the Appalachian Mountain Club. He cherished fall hikes in Maine and New Hampshire. He joined the “HardCore” hiking group shortly after moving to Camden in 1968. A brilliant gathering of regional professions, they took turns planning annual outings for the weekend in September. As their children grew older, they joined in as well. Bill has always enjoyed Nordic and downhill skiing throughout New England and the West. For years he enjoyed ice boating with seasoned sailors Werner St. Claire, Lloyd Roberts and Paul Walters. Bill also shared his love of summer sailing with close friends and family on his boats, Fortuna and Granuelle, on Penobscot Bay and beyond.

In 1982 Bill married Linda Milvaney, mother of Heather McLoud. Each was an avid reader and enjoyed traveling to England, Scotland and a number of countries in Europe. They spent time in their homes in Winter Harbor and Rockport, Maine, and Tarpon Springs, Florida. Linda died in 2012.

Bill loved to read. Books on medicine, science, physics, history and golf covered his tables until his last days. He had a fantastic memory for detail and an enthusiasm for life that accompanied him to the end.

He is survived by three children, Michael Nuesse and his wife, Malee, of Hull, Mass., And their children, Alexandra, Isobel and Adeline; John Nuesse of Canton, Georgia, and his son, Dickson; and Ann McClellan of Camden, Maine, and her children, Thomas and Amelia. He is also survived by his sister, Louise Cadwgan of Rockport, Maine; and her dear friend, Janet Watkinson. His family and PALS comforted him. Francesca and Bonnie deserve a special mention, as do their friends Charlie and Mary Jordan, who brought daily newspapers and great food for her final months.

He was predeceased by his first wife, Doris Ann Tschudy; his parents; his two older sisters, Alice Matthys and Laurie Lloyd; her grandson, Miller Nuesse; and his son-in-law, Mark McClellan.

Memorial donations can be made to Coastal Mountains Land Trust, 101 Mount Battie St., Camden, ME 04843.