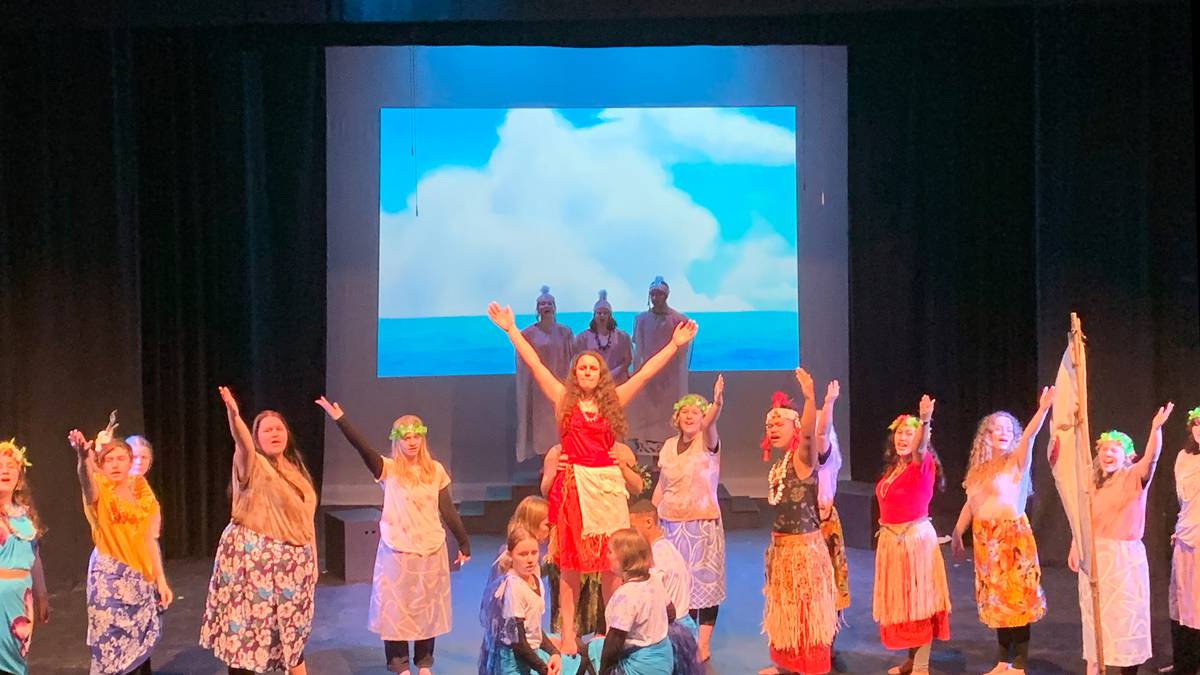 The Stratford High School production of Moana Jr opens this week at the TET Kings Theater and is definitely a show worth taking the kids to.

The 60-minute musical adaptation of the 2016 Disney animated film is the perfect length for younger audiences and features all of the film’s beloved songs, including How Far I’ll Go, Shiny and You’re Welcome , all of which are given all the energy and melody they deserve thanks to the enthusiastic cast.

The story follows volunteer Moana, played by Indi Single, as she sails across the Pacific to save her village. Moana and the legendary demigod Māui (Kauby Ngatai-Northcott) embark on a journey of self-discovery as they both learn where their true power lies.

Indi and Kauby are well placed in this area, and under the thoughtful guidance of Heidi Seales, they both shine throughout the show. Indi undoubtedly has a powerful yet melodic voice well suited to big numbers such as How Far I’ll Go just as much as to softer, more emotional moments such as Where You Are. She may have landed the lead role on voice alone, but Indi is everything for stage presence. She moves confidently around the stage and owns her character, using great facial expressions and body language as she taunts and challenges Māui.

Kauby brings great energy to the scene, giving Māui a lot of the boldness the role demands, but balancing it nicely with a softer edge at times that gave the character a bit more depth than others before. Kauby comes into its own as the story progresses and has the audience eating out of their hand at the end, in true demigod style.

Gramma Tala is hosted by Charlotte Frazier who has a fantastic stage presence and produces the best character acting in the series. She’s a joy to watch, commanding the stage and showing maturity in her acting throughout. His physique is excellent and balanced, keeping the character well within the real and relatable realm rather than allowing him to become a less meaningful caricature.

Elysse Kerr, backed by Neve Payne (left claw) and Libby Kowalewski (right claw) is great fun to watch, and their rendition of Shiny is a highlight, with the song well suited to their voices and performance style. This scintillating trio also showcases the talent of the wardrobe team who created stunning costumes for the production.

Jack Linton (Hei Hei) is another actor with great physicality on stage, and he’s cast well in the role, even at the risk of stealing scenes a few times with his comedic moves and perfectly timed facials. Jordyn Buckland (Pua) is a confident performer and provides a good foil for Jack.

Ephraim Ingram and Chrissy Manuel-Issacs as Moana’s parents each have a stage maturity that belies their age and it’s a shame the script doesn’t give them more time in the spotlight as both actors really shined.

Ciara Staines-Hurley and Rouruina Gerrard play the ancestors, roles that not only require strong voices but also clear diction and perfect timing, a challenge both actors meet throughout. One of the best moments in the production is at the start, as the talented duo direct, aided by some great shadow puppet work that’s done well.

With such a talented main cast, backed by the energetic ensemble of performers singing Lin Manuel Miranda’s catchy tunes, it’s a show kids will love and adults will find more entertaining than they think. It’s been a while since a big production like this has been put on by Stratford High School, but hopefully we won’t have to wait that long for the next one, as there’s clearly plenty of talent to be had. through the school years. .