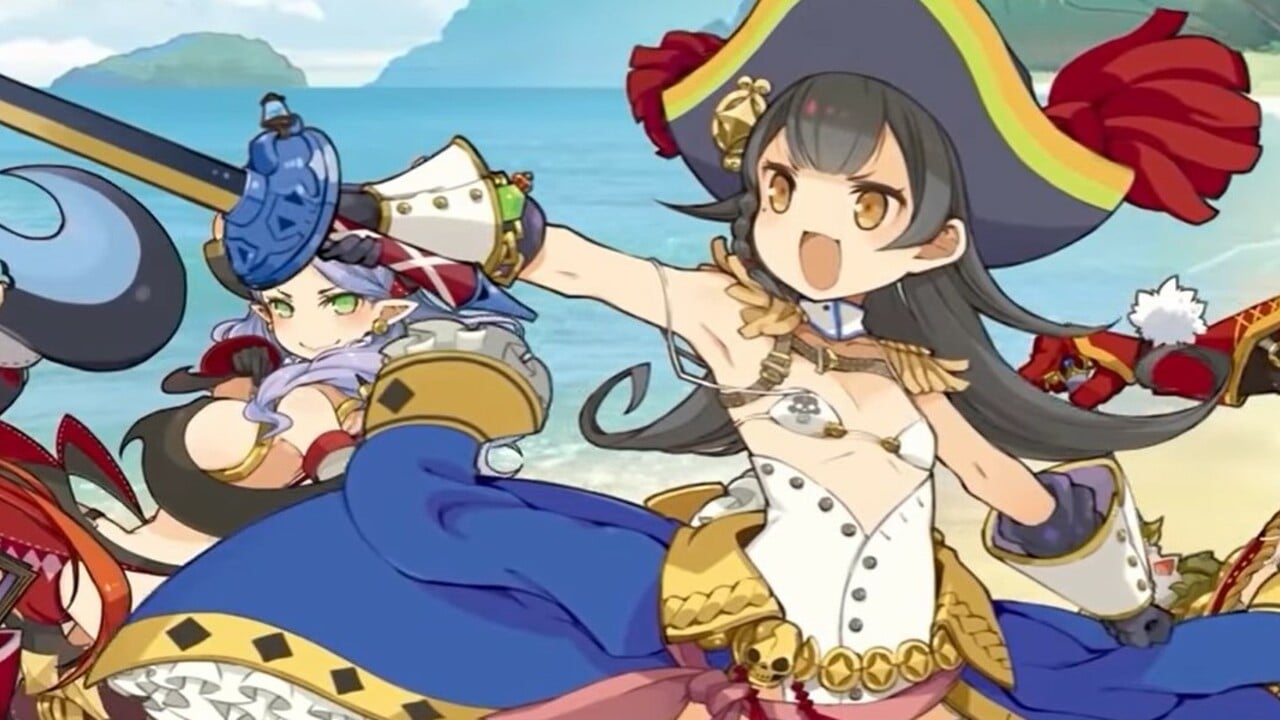 Hacks are always a surefire way to make a game exciting. Who doesn’t love the idea of ​​sailing the seas, plundering and plundering along the way with a loyal crew by their side? There’s only one thing that can make a pirate’s life even more appealing, and that, of course, is hearty fan service. That’s the idea behind Seven Pirates H, which combines turn-based combat with physics-defying busts on Nintendo Switch.

Seven Pirates H isn’t exactly a new game; it was originally released as Genkai Tokki: Seven Pirates for the PlayStation Vita in 2016, but only saw release in Japan at the time. Now, thanks to the good folks at Eastasiasoft, the western world can enjoy this surprisingly fun and deep RPG on the Switch. As an older title ported to a modern console, the visuals aren’t going to blow anyone away, but they’re stylized enough to hold their own.

In Seven Pirates H, players control a pirate crew led by Parute as they explore the Monsupi Sea in search of treasure. At the start of her adventure, Parute is stranded on a strange island with only the strange and perverse Otton for company. Otton claims he can increase Parute’s strength, speed and stamina through the ancient art of “Booby Training”, a talent he picked up earlier that seems to rely on him to manually manipulate. the subject’s breasts. Naturally.

The Booby Training mechanic is one of the main ways characters progress in strength or speed, providing a unique system for building your pirate crew to suit your playstyle. can increase her hit points or attack power, while smaller or firmer breasts allow her to move faster or have a higher defense skill. Having certain stat combinations can even unlock powerful special moves to unleash on enemies. Of course, that means manipulating their “assets” with Joy-con controller thumbsticks or, if you’re in handheld mode, with the Switch’s touchscreen.

It’s definitely not the kind of game you want to play on public transport or where someone might walk in unannounced. There’s more to Seven Pirates H than fan service, however. The combat, while simple, has just about enough depth to keep things interesting for several hours, beyond which it starts to get tiresome. Players can optionally field a party of four characters, all with a mix of stats and elemental affinities. They must choose between performing basic attacks, defending, or unleashing special attacks gained through equipment or stat combinations.

Composing a party with the right elemental affinity to defend against the damage a boss inflicts on you is almost as important as making the right choice during combat. This is both to the game’s credit, as it requires a bit of strategy in big fights making sure all your characters have the right stats for the job, and to its detriment. Provided you have the right party composition ready, many fights are over before you begin, taking the tension out of many encounters.

There’s a wrinkle in the system that we found interesting. MP – which stands for Mura-mura Points here – is earned by attacking or being attacked. Once 100 MP is reached, characters enter a state called Excited, which boosts attack, defense, and agility. Max out MP to 200 and characters get excited. This results in even higher stat increases and immunity to certain status ailments. However, characters can use all of their MP to perform powerful special attacks that look flashy and deal high damage, but leave them with no MP and end the Aroused state.

Picking and choosing when and how to use special attacks is a fun strategy to throw in an otherwise simple combat system. Everything plays out on a familiar turn-based system, and players can see the turn order at the bottom of the screen. It doesn’t hold many surprises for the player, but that’s not always a bad thing depending on what you want to get out of the game. The Auto-Battle feature becomes a welcome reprieve when exploring dungeons for the second times to get crafting materials or complete missions.

While this game’s fan service might make you cringe, there’s an interesting story lurking just below the surface here. Parute must gather a new crew after crash-landing on a monster-infested island in the Monsupi Sea. This crew ultimately consists of seven monster girls, including a kobold girl, a slime girl, and a demon girl. There’s even a kraken-girl in the mix for tentacle lovers. The story is heavy on comedy and light on drama, making for a fun adventure even though you’ll be able to spot the ending waiting for you from a mile away. The story mainly revolves around the bonds these girls form with each other, which are explored through the side quests and storyline missions.

To advance the plot, recruit more girls, and find crafting materials for new gear, you’ll need to explore the dungeons that are found in the islands littering the world map. Each dungeon has one or two linear routes to navigate across the map, which is filled with monsters to fight. These mobs are visible, so you don’t have to worry about random encounters slowing you down. Dungeon maps also have crafting materials that can be harvested by approaching the twinkling lights that are on the ground, encouraging a bit of exploration.

Yet these maps never become complicated to navigate. Most can be completed in one sitting without too much difficulty. At the end a boss will spawn, and these tend to have outrageously large health bars and can take a long time to clear, but they also introduce the Otton Cannon feature.

During a boss fight, the player can choose to recharge the Otto gauge. Doing this in the original Vita required players to shake the console in a somewhat “suggestive” way, but that’s not present in the Switch version. Instead, players can either hold down the “L” and “R” buttons and quickly press “A” to charge up the Otton Gauge, or, if playing in handheld mode, they can rub their breasts. character on the touch screen. Reach 100% charge and Otto, the evil little support character that he is, will unleash a powerful explosion that can take down even the most stubborn enemies. Many bosses can only be defeated with an Otton Cannon at the right time, so knowing when to charge it becomes key to victory. It’s silly and harmless, which matches the general tone of the game.

Seven Pirates H is not a title that wishes to be taken seriously. While there’s a decent story and fun characters behind the fan service, the superficial combat can get tedious after a few hours. It’s fun and lots of humor lands, but the actual gameplay can be a bit worn. While Booby Training’s main mechanic is an interesting way to customize your party, it doesn’t break the gameplay monotony. It’s a title that won’t stay busy for too long and is best enjoyed in spurts, and quite in the privacy and comfort of one’s own home.