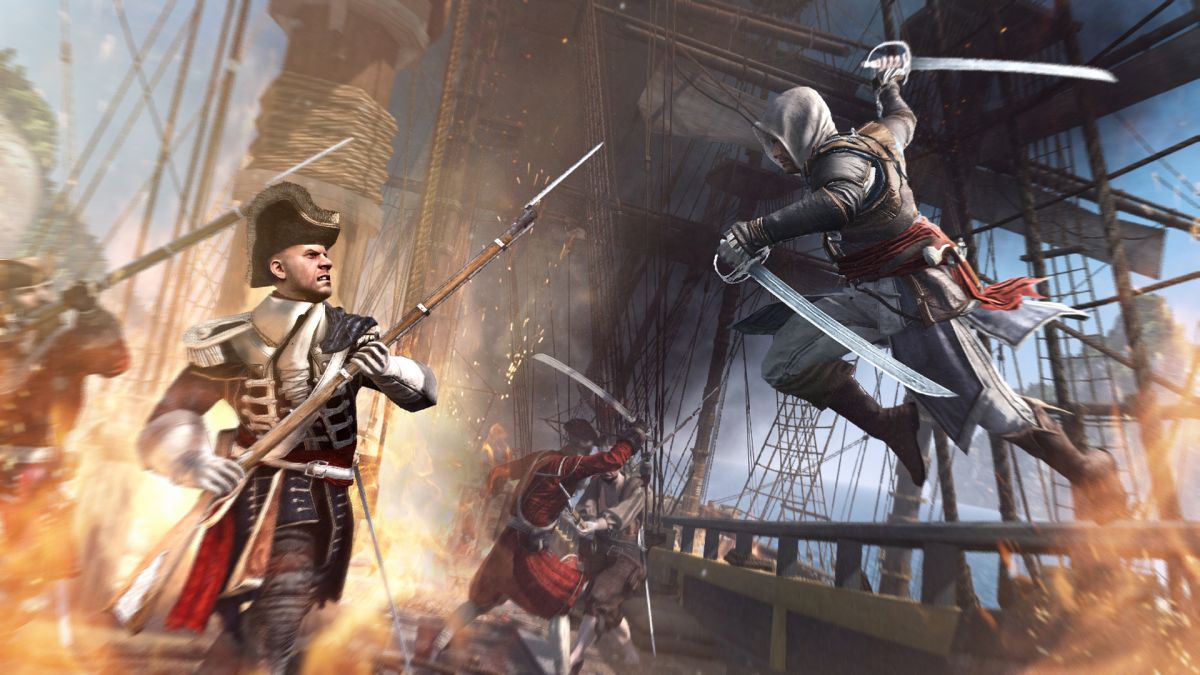 I have a theory, and it’s that Ubisoft’s next swashbuckler, Skull and Bones, has been in development hell for so long because it’s trying to answer a dumb question. It’s, “Why can’t we have Black Flag without Assassin’s Creed?”

You can’t blame Ubi for trying – plenty of people would love to ride the waves Edward Kenway once ruled without a whole load of luggage in the hold. But the resulting product is a multiplayer survival game. Granted, with more refined menus than the 9,000 that come out every two weeks – but Skull and Bones seems to have more in common with The Division than Black Flag.

The problem is this: once you remove Assassin’s Creed from Assassin’s Creed IV: Black Flag, you don’t have much left. A beautiful interpretation of the Caribbean in the 18th century, of course. But what are you doing in there? What keeps you there?

Even in the base game, with a strong narrative pull to keep you going, the hacking stuff gets a little tedious in the middle. Once you’ve fully upgraded your ship, hideout, and gear, Black Flag’s side activities become surplus to requirements.

There’s no mock Elite-style economy, no bigger and better ships to buy, none of the marital prospects you might find in Sid Meier’s Pirates!, or, for that matter, anything like that. on a social scale. No rivals. No plot. Nothing to climb, alas, but walls.

In the context of Black Flag, an Assassin’s Creed game, that’s completely fine. Kenway is the star here; you are not investing in sugar, you are investing in its history. For seasoned fans, the role he plays in the larger continuity (a bridge between eras and a link around which a number of major characters orbit) is what really matters.

The emergent “pirate stuff” is as complex as needed to support character growth, giving the player a sense of progression that mimics Edward’s growing status in the narrative. Black Flag is an Assassin’s Creed game in every sense, for better or worse, with all the baggage that entails.

This aspect of its identity is fundamental and cannot simply be cut out like a faulty GPU. Wishing it wasn’t is a bit like complaining that Star Trek isn’t installed on a submarine (something that’s been tried, as it happens, and was crap) .

Assassin’s Creed is one of those bizarre cultural forces that generates a surprising amount of talk about how anything else should be. Every time it’s in the news, some annoying asshole somewhere decides to write that article again. You saw him. It’s usually titled something like “It’s time for Assassin’s Creed to ditch modern history”, written by and for people who didn’t bother to notice that it’s already been relegated to fifteen minutes largely optional spread over a 300 hour RPG. It’s not worth complaining about. If you had pot on toast with that kind of report, you’d need an electron microscope to confirm it was there.

Assassin’s Creed Mirage, the next installment in the series, will be a stealth adventure that evokes the 2007 original. It’s a smart move by Ubisoft to combat franchise fatigue and capitalize on millennial nostalgia.

But hey, yeah: there’s no denying that a lot of people just don’t care about the story of Assassin’s Creed. Despite this, the series is outrageously popular; beyond its continued take-it-or-leave-it portrayal of an ideological Cold War, Assassin’s Creed’s main appeal is its ability as a place of historical tourism. A veritable holodeck brimming with archaeological and anthropological intrigue. Discover abandoned temples! Explore ancient cities at their peak! Meet interesting historical figures and stab them with a special knife! Or just take a walk and learn about our ancestors – how they lived, how they worked, how they ate.

Ubisoft’s commitment to providing a Discovery Tour experience for each of its most recent Creeds is a testament to the series’ enduring appeal through its vibrant, hyper-detailed, and stunningly accurate portrayal of places and people from long ago. long time. .

All this to say that Black Flag’s broad appeal isn’t, as some seem to believe, despite its connection to Assassin’s Creed. It is in fact totally dependent on it. Stripping Black Flag of this connection therefore leaves such a huge hole to fill that you might as well start over. What are you replacing it with? A single-player story that, say, adapted the real-life story of the short-lived pirate republic of New Providence Island would cover so much of the same ground as Black Flag that it wouldn’t be worth the effort. It makes sense, in this case, to focus on a multiplayer experience: have players “create their own stories” and all that. But that’s not exactly what someone meant when they wanted a pirate game without all that Templar and Alien stuff.

With the best will in the world, Skull and Bones was never going to bear much more than a cursory resemblance to the now-gritty last-gen game from which it sprang. Is it any wonder then that the project never seemed to have a direction? That it spent so many years as a cancellation rumor, only occasionally surfacing and looking markedly different each time?

Our latest preview of Skull and Bones reveals a fantasy pirate-themed playground that retains very little of Assassin’s Creed’s sense of place or authenticity. Ships clad in spiked armor belch flames at each other – in the shadow of a mushroom-shaped floating island that defies the laws of physics, let alone the history books. It’s more like navigating a dumb heavy metal album cover than any kind of time travel experience. This isn’t necessarily a bad thing per se, but it does indicate how impossible Assassin’s Creed is to remove Assassin’s Creed. You end up with a vessel of Theseus. A trigger broom.

It remains to be seen whether Skull and Bones turns out to have been worth the wait, or a sunk cost mistake that should have been scuttled after early concepts were scrapped. What’s pretty clear, however, is that anyone hoping for a mythical baggage-free follow-up to Black Flag is going to be deeply disappointed.

Comparisons will be constant, inevitable and rarely favorable, if only out of nostalgia. So Skull and Bones has a real uphill struggle on its hands – it has to be good enough, on its own merits, to defy and exceed some rather lofty expectations set by a beloved and half-forgotten predecessor, from whom it hopes without any doubt. doubt the success. to capitalize on despite the fact that it is a totally different type of experience.