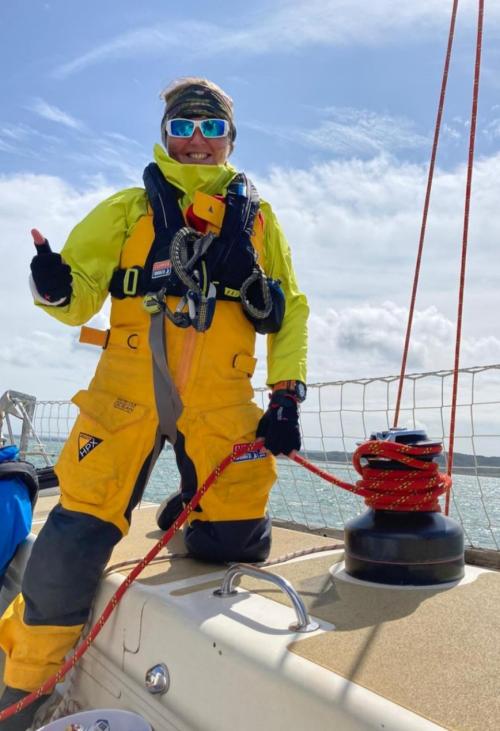 
Sophie Quintin, a PhD student at the University of Portsmouth, is about to embark on one of the most grueling ocean events in the world, the Clipper Round the World Yacht Race.

Sophie, who is studying international relations with a focus on African maritime security, had prepared to join the famous yacht race in March 2020. With the world shut down due to the pandemic, the adventure of sailing and the plans for field work in Senegal upon his return collapsed. down. Two years later, she is set to join the crew of the 70ft Team Seattle to take part in Leg 8, a 5,000 nautical mile adventure across the North Atlantic Ocean from Bermuda to New York and then to Londonderry and finally in London.

After two years of confinement and many uncertainties, the race restarted in March from the Philippines, with the fleet now heading to Bermuda for the start of the final leg across the North Pacific (June 19 to July 30).

The prestigious yacht race, headquartered in Gosport, was founded by Sir Robin Knox-Johnston who won the first solo race around the world in 1969. Uniquely, it takes amateur crews on one or more legs of a trip around the world. on 11 identical yachts designed to withstand the harshest sea and weather conditions in some of the most remote parts of the world’s oceans.

Sophie, a qualified skipper, had completed the mandatory four weeks of intensive training in the summer of 2019. Since then she has taken advantage of every training opportunity in the Solent, including competing in two classic RORC races last summer (Round the Island and Cowes-Dinard). She says: “With a lot of miles covered, my main concern when restarting the race was not remembering knots and paces. Getting back in shape after months of injuries at my age has been the real challenge of the past two months while keeping my thesis writing on track. Patience, perseverance, effort and lots of support from friends have fortunately made me fit for duty, ready to be “activated” as a crew on June 15th.

Her passion for the sea and sailing helped her pursue her goal of changing her life by becoming a researcher in her forties. As a research assistant and doctoral student working for the University’s Center for Blue Governance, she participated in the launch of the center in February 2020. The award of the UNESCO Chair in Ocean Governance in December 2020 reinvigorated team with the goals of developing exciting projects in ocean science and education with policy impact.

Sophie added: “I was lucky enough to be part of a formidable team of researchers, all passionate about the sea and thinking outside the box. It is a blessing to work with professors Pierre Failler and Alex Ford. It drives me to achieve my goals and improve myself all the time.

Sophie intends to use her run to raise awareness about ocean health and governance. By partnering with the charity Clean Sailors, she hopes to reach the sailing community around the world and inspire other sailors to join in ocean conservation. She says: “There have been some very positive developments in ocean racing over the past decade, with most major races now engaging with the sustainability debate and taking action to improve the health of the oceans.

“We sailors all need to become ‘ocean ambassadors’ of some sort, not just ‘users’.”

You can follow the Clipper Race fleet on the race tracker here. Stage 8 begins June 19 and Seattle is the purple boat.

Flag this article as inappropriate

You must log in before you can do this! It is only a quick registration process to join the AMA network and completely free.

Whiting Petroleum (NYSE:WLL) is trading down 7.1%