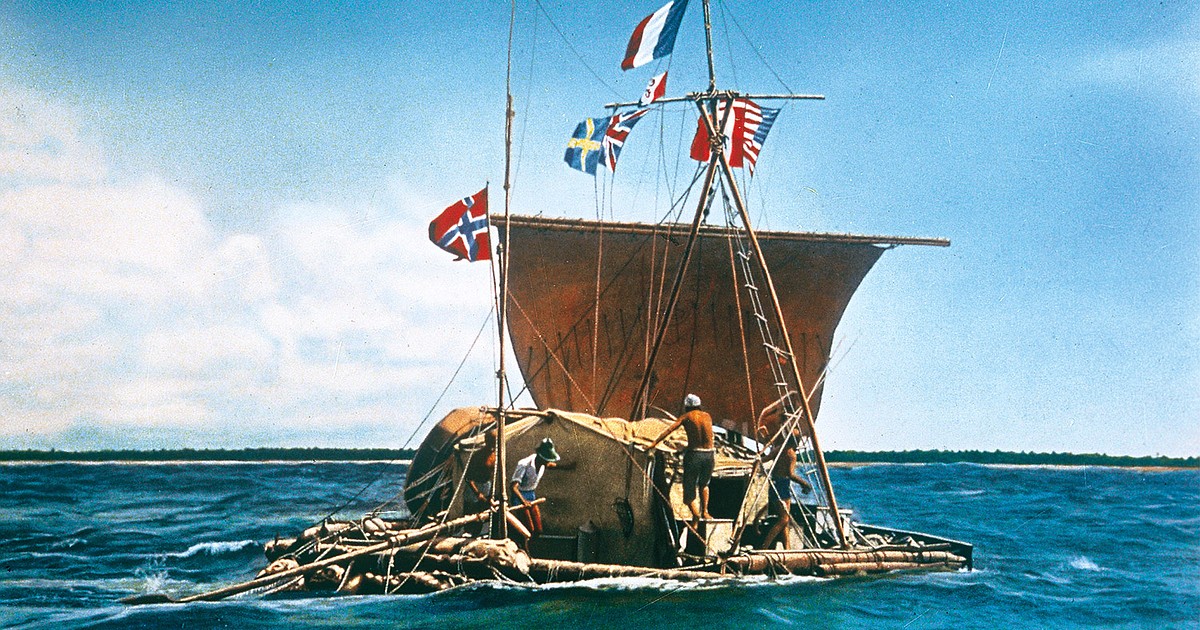 Thor Heyerdahl was one of the great ethnographers and explorers of the twentieth century. Seeing that there were cultural similarities between Egyptians, South Americans and Polynesians, he decided to find out how it happened.

He believed the answer was in how ancient civilizations traveled from Africa across the Atlantic Ocean, and later across the Pacific by peoples of South America.

He showed how they could have done this by building rafts in ancient traditions and then sailing them across both oceans, facing storms, the high seas, dangerous reefs, sickness of the crew and sharks.

Thor Heyerdahl was born in Larvik, a small coastal town in Norway. His father, Thor Sr., was a brewer. The boy grew up with a love of nature, and at the University of Oslo he studied zoology, botany and geography.

Young married at 22 and before graduating, he and his wife, Liv, 20, sailed to Fatu Hiva, an island in French Polynesia to live off the land, hoping it would be a paradise far from the civilization. Living in a hut on stilts that they themselves built, their scientific mission was to collect animal and plant specimens.

Liv noticed that the big ocean swells only crashed on the east side of the island. Thor wondered if these swells could carry people on some sort of ocean-going vessel from South America to Polynesia.

Scholars of the time believed that the Polynesians came from East Asia, roaming from one archipelago to another. Heyerdahl said these people from the west arrived later – but via the Bering Strait (then a land bridge) to migrate to the rest of the Americas and Hawaii.

Heyerdahl believed the Polynesians had arrived from the east earlier. The story he heard in Fatu Hiva about Kon-Tiki Viracocha, an indigenous chief who, according to legend, “sailed west of Peru until sunset on a large wooden raft of balsa “supported this belief.

Fatu Hiva turned out not to be heaven, and within a year the young couple were back in Norway.

Ten years later, he sets out to prove his theory.

With personal savings and private funds, he planned the Kon-Tiki expedition, recruiting a crew of four other Norwegians and a Swede: artist Erik Hesselberg, Bengt Danielsson, translator and steward in charge of supplies, radio operators from the Norwegian resistance of World War II Knut Haugland and Torstein Raaby, and engineer Herman Watzinger.

The team built the Kon-Tiki raft in Callao, Peru, at a Peruvian Navy facility, using nine logs of balsa wood from the Ecuadorian jungle for the hull, floating them along the coast. The deck and cabin were made of bamboo and banana leaves, and mangrove wood for the A-mast.

No metal was used and everything was tied with hemp rope.

The only modern equipment on board were steel knives, machetes, sextants, waterproof watches, radio equipment, cans and emergency field rations provided by the US Army Quartermaster Corps, as well as an inflatable boat. for the safety.

In addition, they carried water – some in native-style bamboo containers – 200 coconuts, sweet potatoes, fruits, roots and roots of gourds.

Radio contact would be maintained with amateur operators around the world, the Norwegian Embassy in Washington, DC and others – using batteries and a crank.

Gerd Vold from the Embassy would monitor communications.

Defying Heyerdahl, American anthropologist Herbert J. Spinden of the Brooklyn Museum said, â€œSee how far you get from Peru to the South Pacific on a balsa raft. “

And a visiting diplomat told Heyerdahl: â€œYour mother and father will be very saddened when they hear of your death.

The trailer was released, everyone said their farewells, the sail with its decoration of the Inca sun god was hoisted and the Kon-Tiki sailed west on the Humboldt Current.

The first week of the outing was about getting used to the increasing ocean swell and the crackling and groaning of balsa, bamboo and ropes stretched against the might of the sea.

At night, as the men were doing hour-long shifts, the kerosene lamp attracted flying fish that landed all over the raft – one just in a frying pan. French fries, they were a breakfast treat and were also great bait for catching bigger fish.

The biggest fish of all was a whale shark which can sometimes be up to 65 feet long. The harmless plankton-eater spent a day circling the Kon-Tiki, causing everyone to fear that the monster would hit the raft and break it.

After artist Erik Hesselberg stupidly planted a harpoon in it, the giant fish fled, broke the line and moved away, never to be seen again – the harpoon floating on the surface.

As the weeks went by, the waters became calmer and the elements worried less.

Throughout the trip, they took notes of the aquatic world around them, including temperatures, wind conditions, sailing positions, pelagic crabs, barnacles and mussels, porpoises, fish and seabirds attracted to the Kon-Tiki.

Although there was little rainfall, the crew never had a water problem and often did not need their daily ration of one liter of water per man. Hot days drain salt from the body, and the body craves salt, so the crew often drank salty sea water, and although the bitter taste persisted, the men “never felt bad.” .

By accident, they discovered that eating oats took away most of the nasty taste.

They were never in danger of starving to death either. Often, a swell would sweep over the raft and pour a delicious bonito aboard. And the sharks that roamed most of the time were easy to catch, sometimes by grabbing the tail.

Another danger was falling overboard. There was no way to return the raft for rescue. During the night shift, being tied to the raft was mandatory – everyone understood: “Once at sea, always at sea.”

On day 97, the Kon-Tiki arrived on the island of Angatau in French Polynesia. Natives paddling on outriggers came to greet them, bringing Knut Haugland back to organize a rescue team. Only their boss spoke English – just two words: “Good night”.

However, they were never able to get the raft into the lagoon, and soon they drifted away from the island again – with Haugland back on board.

On August 7, 1947, the historic voyage ended after 101 days at sea, covering 4340 miles, with the Kon-Tiki stranded on a coral reef off the uninhabited Raroia Atoll.

Repeated ocean swells lifted the raft onto the reef, pulling it closer to the lagoon until it stopped moving. The cabin was smashed but their supplies remained intact.

As an upcoming reef disaster seemed inevitable, Torstein Raaby picked up a Morse code message that was picked up in Rarotonga, Cook Islands, 1,200 miles to the southwest.

His last words were, “Okay, there are fifty yards left.” Here we are. Byeâ€¦”

Everyone survived – except the parrot Lorita which was lost two months after leaving Peru when a large wave crashed into the stern of the raft as the bird descended from the masthead.

As they made their way to dry land, the tanned crew celebrated their historic achievement by planting a coconut tree they had brought back from Peru.

Eventually, neighboring islanders found them and brought them back to their village, offering them a great welcome feast.

A few weeks later, a French schooner named Tamara was sent from Tahiti to retrieve the crew and save the Kon-Tiki.

The crew were once again showered with praise and festivities in Papeete, Tahiti. Then a Norwegian ship Thor I picked them up with the Kon-Tiki, taking them to America and glory.

The raft is now in the Kon-Tiki Museum in Oslo, Norway.

Three years later, Thor Heyerdahl’s book “The Kon-Tiki Expedition” was published and sold over 50 million copies in over 70 languages, his documentary film winning an Oscar.

Describing the broken Kon-Tiki on a South Pacific reef before being retrieved, Thor Heyerdahl wrote: â€œIt was a wreck, but an honorable wreck … but the nine balsa logs from the Quevedo Forest in Ecuador were still also intact. .

More was to come for the Norwegian explorer.

“Our planet is greater than the bundles of reeds that have carried us across the seas, and yet small enough to run the same risks unless those of us still living open our eyes and minds to the desperate need of intelligent collaboration to save ourselves and our common civilizationâ€¦ “

The disbelievers laugh at Heyerdahl …

â€œSo-called experts predicted that balsa would quickly break under stress; that the logs wear out through the ropes or become waterlogged and sink; that the sail and rig would be stripped by sudden, howling winds; that gales would submerge the raft and carry the crew overboard. A naval attache bet all the whiskey the crew members could drink for the rest of their lives that they would never make it to the South Seas alive.

Pelagic crabs, barnacles, mussels, and other sea creatures attach themselves to floating objects, including the Kon-Tiki. A pelagic crab found a comfortable niche on the raft and settled down for the trip, feasting on kitchen scraps. Eventually, he would go out whenever someone approached, and the crew members would give him a handout and he would become their pet. They named him Johannes.

Thor Heyerdahl learned to love nature and geography from his mother at an early age. She owned a museum and he opened a one-room animal museum while he was still in elementary school.

Thor Heyerdahl married three times, the first two ended in divorce. His first wife was Liv Coucheron Torp who went to Fatu Hiva the day after their wedding. They divorced in 1947 just before Kon-Tiki, with Liv claiming that she never received credit for her work. They had two sons, Thor Jr. and BjÃ¸rn. The second wife was Yvonne Dedekam Sominsen and they had three daughters: Annette, Marian and Helene Elisabeth. They divorced in 1969, which he blamed himself. His third wife Jacqueline Beer was Miss France and film and television actress. They lived in the Canary Islands where she helped him with his projects until his death.