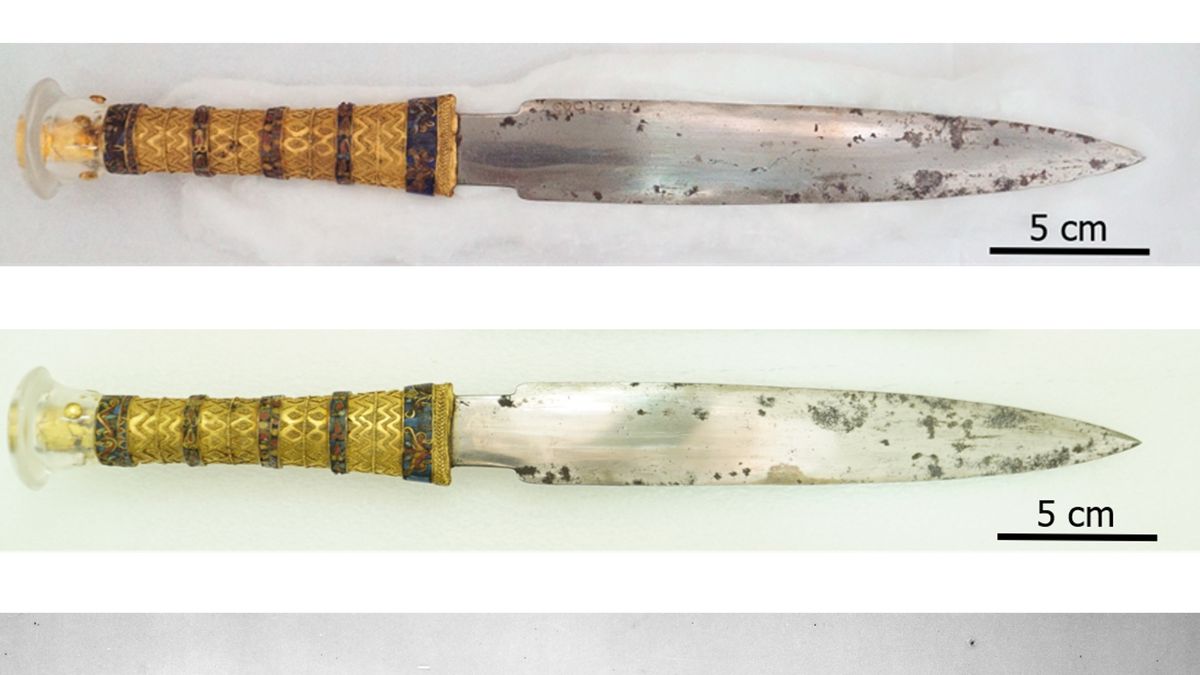 In 1922, when British Egyptologist Howard Carter discovered the relatively intact burial chamber of Tutankhamun’s tomb in the Valley of the Kings in southern Egypt, he found a well-preserved mysterious iron dagger among the items piled inside. . An enigma quickly emerged surrounding the origin and manufacture of the dagger, with a roughly polished double-edged blade, a hilt made mostly of gold, and a prominent winding fissure in the center.

Tutankhamun ruled during the 18th Dynasty of Ancient Egypt, between 1361 and 1352 BCE. This period corresponds to the Late Bronze Age and therefore about a century and a half before iron processing technology was acquired and its use became widespread in the Iron Age. Some previous artifacts, such as the aforementioned Pharaoh’s Dagger, were made with the iron of metal meteorites that reached Earth’s surface at some point. But the high quality of this object showed that it came from a place where the art of working the iron of meteorites was already well established; its origin and manufacture therefore remained a puzzle for years.

Now a new study by a group of Japanese and Egyptian researchers at the Historical Egyptian Museum in Cairo has shed new light on the dagger. Through non-destructive chemical analysis, the team was able to determine that the raw dagger blade meteorite was most likely octahedrite, the most common class of iron meteorites. They also discovered that the weapon must have been made at low temperatures before being forged, and that the object was a gift brought from Anatolia.

The origin of Tutankhamun’s iron dagger is crucial as it directly affects the widely accepted history of human civilization from the Bronze Age to the Iron Age.

Tomoko Arai, scientist at the Chiba Institute of Technology in Japan

“The origin of Tutankhamun’s iron dagger is crucial because it directly affects the widely accepted history of human civilization from the Bronze Age to the Iron Age,” says Tomoko Arai, a scientist from the Center for Research on planetary exploration at the Chiba Institute of Technology in Japan. , and one of the authors of the study. “The Time of King Tut [as he is commonly known in the English-speaking world]circa 1300 BCE corresponds to the Late Bronze Age, and the Iron Age would have begun around 1200 BCE,” she adds.

The Arai team was able to establish that the iron in the dagger came from the octahedrite thanks to the analysis of the distribution of nickel in the blade of the object. In a sense, the nickel map shows the presence of a structure known as the Widmanstätten pattern, a type of lamellar imprint found in metallic meteorites such as octahedrite. In the case of Tutankhamun’s dagger, these lamellar impressions were about a millimeter thick, imperceptible to the naked eye due to the polishing treatment performed on the object.

As for the manufacture of the weapon, the researchers point out that the preservation of the Widmanstätten pattern excludes the high-temperature forging method. On the other side, the significant loss of sulfur, manifesting itself in the form of dark spots on the blade of the dagger, suggests that it was heated to a temperature between 700 and 950°C; a range corresponding to low to moderate temperature heating.

“The dagger must have been made with low to moderate temperature forging, allowing the Widmanstätten model to survive during manufacture,” says Arai. “Previous studies have not found the Widmanstätten pattern because it cannot be seen in plain sight. [But] the structure appeared once we mapped the nickel elements over the entire surface of the dagger,” she adds. “That was our ‘wow’ moment.”

The origin is another mystery around Tutankhamun’s blade. In the Amarna Letters, a diplomatic correspondence written on clay tablets and discovered in a royal archive in southern Egypt, there is a list of gifts sent by King Tushratta of Mitanni in Anatolia, to Pharaoh Amenhotep III, Tutankhamun’s grandfather of ancient Egypt when he married Princess Tadukhipa, Tushratta’s daughter. Among the gifts mentioned in the list is a dagger with an iron blade.

Arai’s team research indicates that it is most likely the same dagger for two main reasons. The first being that iron processing technology was already common at the time in the regions of Mitanni. And second, because the dagger’s gold hilt shows a low percentage of sulfur-free calcium. This characteristic indicates the use of lime plaster as an adhesive material for the decoration of this part of the object, a material frequently used in Mitanni, which was used in Egypt until several centuries later, in the Ptolemaic period.

“Based on currently available evidence that we have obtained through non-destructive, non-contact chemical analysis, our suggestion is the Mitani kingdom in Mesopotamia as the object’s origin,” says Arai. However, she will not consider the mystery solved: “It is not yet a definitive conclusion.”

Why would anyone want to get out of debt?