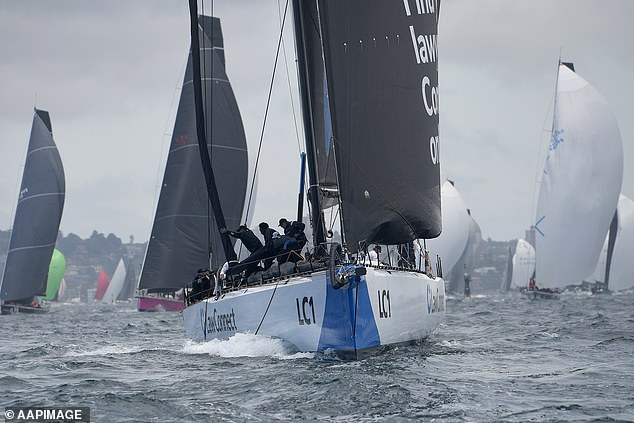 Yacht racing boats from Sydney to Hobart will have to return ashore if positive Covid test results are obtained for any of their crew.

The race started on time despite last-minute tests for Covid-19, with several boats still awaiting final results for crew members.

A negative Covid PCR test within 72 hours of arrival was required to enter Tasmania, but the Tasmanian government allowed sailors to participate in the race and receive their results en route to Hobart.

If anyone tests positive, the boat will be forced to withdraw and return to Sydney if the result is obtained in New South Wales waters.

If this happens in Tasmanian waters, the Covid-positive sailor will be quarantined immediately after landing.

Any crew member who does not obtain their test results before arriving in Hobart will be required to self-quarantine until they return a negative result.

The commodore of race organizers, the Cruising Yacht Club of Australia, Noel Cornish, thanked the Tasmanian government for allowing some leeway.

â€œWe are very grateful for that. With the cooperation of the Tasmanian government, we were able to recover these boats, â€he said.

Jim Cooney, who won the race in 2019 – the last time it was raced, after being called off last year – with Comanche, retired his boat Willow on Christmas Day after four crew members had had positive Covid tests.

â€œWe have looked at all the options available, but we are concerned that if we get to Hobart people will get sick along the way,â€ he said.

Many boats left Sydney for the Sydney-Hobart yacht race pending the results of the crew members’ Covid-19 tests. In the photo, a rapid antigen test

â€œIt’s extremely disappointing for everyone. We have worked hard to prepare for this race and our crew have come from all parts of the world, â€he told the Sydney Morning Herald.

Four yachts have pulled out in the past two days due to Covid concerns, including one less than 10 minutes before the traditional Boxing Day start gun, while another abandoned due to an injury to the ‘crew.

In the race itself, Australian super maxi LawConnect quickly took the lead as the fleet of 88 yachts depleted by Covid – a steep reduction from the 157 boats that left in 2019 – embarked on one of the events most difficult ocean routes in the world.

The competitors include 17 two-handed yachts, which are allowed to participate for the first time.

LawConnect took the lead ahead of SHK Scallywag, a 30m super maxi rival from Hong Kong whose crew struggled to recover after encountering sailing issues early on.

Despite the gloomy weather, spectators crowded along and into Sydney Harbor to enjoy the spectacle. Pictured are yachts making their way shortly after the start of the 76th Annual Sydney Yacht Race to Hobart

The Super Maxis LawConnect crew are pictured ahead of the start of the 2021 Sydney-Hobart Race in Sydney Harbor on December 26, 2021

Spectator boats have crammed into a cloudy and windy Sydney harbor to enjoy the return of the classic race, which was canceled last year due to Covid for the first time since it started in 1945.

The pandemic has cast a shadow again, with some of the fastest yachts sidelined this year, including the super maxi Comanche and the nine-time online honors winner Wild Oats XI.

Weather is a critical factor in the 628 nautical mile (1,200 km) race along Australia’s east coast to the Tasmanian capital.

Six men died, five boats sank and 55 sailors were rescued in the 1998 race when a huge storm hit the fleet in Bass Strait.

The field is seen under spinnaker at the start of the 76th Annual Sydney Race to Hobart Yacht in Sydney on Sunday December 26, 2021

â€œFor all boats, the challenge after leaving and leaving the [Sydney] the chefs will not only adapt to their race pace and their monitoring systems, but also to keep their boats intact in difficult conditions, â€said the Cruising Yacht Club of Australia.

Depending on the weather, the Super Maxis are expected to arrive in Hobart on Tuesday.

While the first sailboat to cross the finish line gets the most attention, sailors consider handicap honors, which take vessel size into account, as the main prize.

In the last race, in 2019, Ichi Ban won the general classification with a handicap. Owner and skipper Matt Allen is competing in his 31st Sydney-Hobart race after starting at the age of 17.

‘This excitement on Boxing Day doesn’t change at all. That little nervousness before you set off, that feeling of relief once you get out and actually start to navigate the boat.