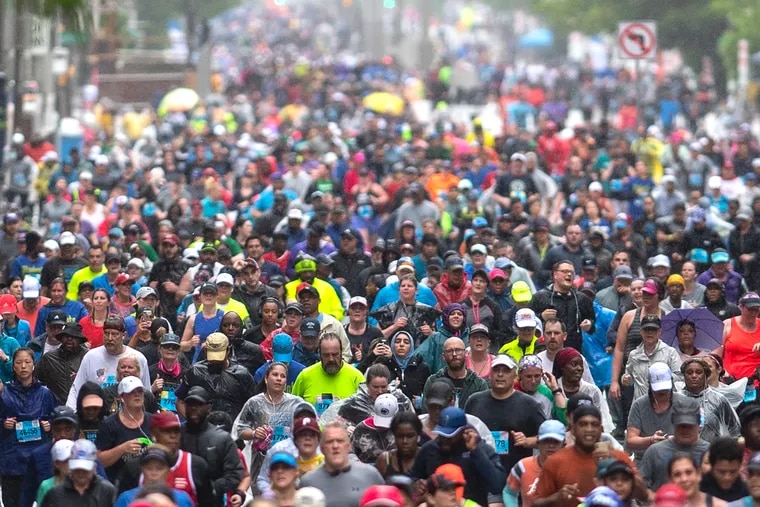 The Broad Street Run is mostly downhill, but how does it really help?

Maybe it’s a joyous blast from the Temple University marching band cranking your engine, or the sight of the William Penn statue rising from the skyline as you stroll through the heart of Philadelphia.

At this year’s Broad Street Run on October 10, there’s the added attraction of making up for the cancellation induced by the 2020 pandemic. But year after year, one of the main draws of the 10-mile run is that it is (mainly) downhill.

Yes, there is that quarter mile climb from West Courtland Street, and a few other nasty stretches of uphill. But for the most part, the course is smooth sailing, dropping an average of 15 feet in elevation with every mile of pavement.

Is it enough to make a difference in the performance of runners?

The answer, according to experts in biomechanics, is yes. While the gentle downhill slope is barely enough to be noticed in some spots, runners will use a little less energy than if they were running on a flat surface and can, if they so choose, ‘spend’ the savings. energy to run a little faster.

Exactly how much faster requires some explanation. To get up to speed, we spoke with researchers Paul DeVita from East Carolina University, Max Paquette from the University of Memphis, and Jinger Gottschall, scientific director of two fitness companies: Wahoo Fitness and Les Mills International.

As with anything else involved in moving an object from point A to point B, the answer involves physics. For science showers, we promise the explanation will be pretty painless. Or at the very least, less pain than what you feel when turning the bend at town hall.

And a reminder: No matter how steep the road is, the run is always 10 miles. Don’t try it without proper training and a good health check.

A simple way to approach the issue of downhill is to think of running as pushing a big block of wood along the street, like those classic physics problems teens grapple with in high school.

No mystery here: the work is easier on the descent.

The steeper the angle, the more gravity pulls the block (or runner) in a downward direction, said DeVita, who runs a biomechanics lab and is a professor in the East Carolina Department of Kinesiology.

Except that the human body is not a block of wood, but a convoluted assortment of bones and joints exerting forces in all directions.

“The reason people like me have jobs is because we are not blocks of wood,” he said. “The mechanics are the simple part. It is the organic part that is delicate.

»READ MORE: Changes to the Broad Street Run route for 2021

For runners (and pedestrians), it turns out that gravity helps in a second way as well. To understand this, imagine the human body as a series of rigid, interconnected springs, said Gottschall, a former associate professor of kinesiology at Pennsylvania State University.

With each step, a runner compresses these springs – tendons, bones, and other joints – pulling a slight nudge as they bounce. On a downhill slope, when the runner’s foot lands at a lower elevation with each step, the springs are compressed even more, Gottschall said. And therefore, the rebound effect is greater.

“You can think of this distance as saving energy,” she said. “It keeps the muscle from having to do the work.”

Up to a point, that is. On steeper slopes, the muscles compress so much that the runner has to spend quite a bit of energy braking, ultimately wiping out the energy “savings” from the rebound effect, she said.

In addition to the energy cost, going down a steeper slope causes more mechanical wear and tear on the body than running uphill, said Paquette, a former college running star who is now an associate professor in Memphis. The calves, quads, glutes and hamstrings must contract in a way that biomechanical researchers call “eccentric.”

“Despite the production of tension and force, the muscle fibers lengthen to keep our joints from collapsing like inexpensive lawn chairs,” he said.

But the decline on Broad Street is mild enough that none of these issues – the energy to slam on the brakes and the extra muscle wear – are likely to be a factor for most runners, Paquette agreed. and Gottschall.

Considering the complexity of the human body and the fact that runners have different gaits and fitness levels, calculating the net impact of all of this at a specific gradient is not straightforward.

Instead, the researchers resorted to measuring the performance of runners on a treadmill.

In the best-known study on the subject, published in 2002 in the Journal of Applied Physiology, a team of European scientists tracked runners’ energy consumption on slopes ranging from 45% downhill to 45% uphill. These extremes are quite steep, corresponding to an elevation change of 45 feet per 100 feet of pavement.

The average grade on Broad Street is much shallower – only 0.28% downhill, which means an elevation drop of 0.28 feet (about 3 inches) with every 100 feet of pavement. (The figures are based on satellite data from Strava, the fitness tracking company.) While this specific gradient is not among those measured by scientists, the study results can nonetheless be used to have an approximate idea of ​​the acceleration of the descent on the 10-mile course.

This is because the scientists plotted their measurements on a graph and then came up with an equation to fit the data.

It’s a doozy: a six-term polynomial that we can’t fully reproduce with our editing system.

But the end result is easy to grasp. If you plug in the average slope of Broad Street, the equation suggests that a participant in a run uses about 1.5% less energy than when running on a flat surface. (Skills to Guillaume Millet, professor of exercise physiology at the Jean Monnet University of Saint-Étienne, France, for checking our mathematics.)

Again, runners could choose to finish the race feeling a little less tired. Or they could use the energy savings to run much faster.

In practice, the magnitude of the Broad Street increase is probably not exactly 1.5%, as the grade varies over the 10 mile route, including occasional climbs.

Psychology also likely plays a role, Paquette said. Inexperienced runners, for example, can hit a climb and lose heart. Or when they reach a downhill stretch, they may feel extra motivation.

But on average, science backs up what runners have been saying for decades: that the Broad Street Run route allows participants to go a little faster than usual.

So put on your shoes, runners. It’s time for those “springs” in your legs to get to work.

Brooks Automation to unify its services under Azenta Life Sciences