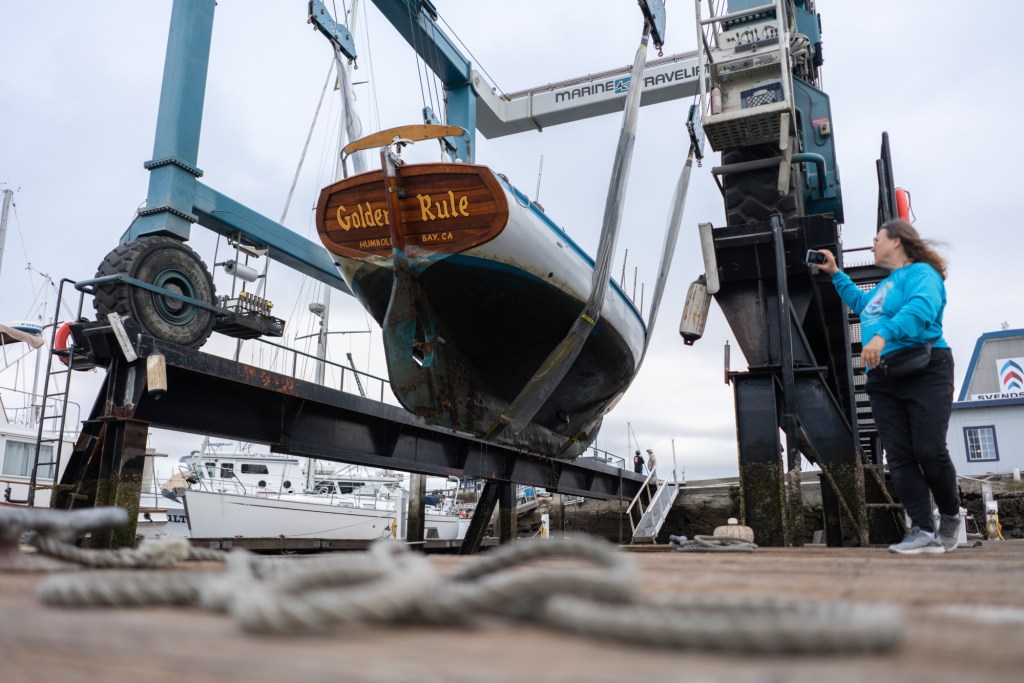 RICHMOND — ‘The Golden Rule’ was the first boat out of the water at Svendsen’s Bay Marine shipyard on Monday morning.

As the waves of San Francisco Bay lapped over the 30-foot wooden ketch sailboat around 8 a.m., a mechanical lift swaddled the port and starboard sides of the ship, lifted the boat from the water and the has nested on a semi-trailer, where it will be moored for the next week.

The Golden Rule set sail through the streets of Richmond just before noon on Monday, embarking on a 2,000-mile journey east to complete “The Great Loop” – a path that begins on the Mississippi River in St. Paul, Minnesota, winds around Florida, up the east coast of the Atlantic Ocean, pivots to Maine, crosses the Hudson River, and finally around the Great Lakes.

The old wooden sailboat, owned by the group Veterans for Peace and primarily based in Humboldt Bay, is on a mission to navigate every waterway in the United States, educating people about a “nuclear-free world” along the way.

Richmond Marina, the group said, had the right people and the right tools in place to help kick off the final voyage.

One of the boat’s captains, Kiko Johnston-Kitazawa, who grew up in Hawaii and has been a practicing Buddhist involved in anti-nuclear work since age 14, said the exposure was personal.

“I had the skills to sail the boat and take care of the boat, but the interest in world peace and nuclear disarmament comes from much, much further afield in Hawaii,” Johnston-Kitazawa said, while watching “The Golden Rule” roll one way. “Many of the people’s ancestors came from Hiroshima and Nagasaki in Japan – the first places where nuclear weapons were deliberately used against people.”

The Golden Rule has set sail with the same mission in mind for the past six decades.

Helen Jaccard, project manager for Veterans for Peace, said the crew put on presentations throughout their travels to try to teach as many communities as possible about the possibility of nuclear war, its consequences and how people can try to stop it by crafting petitions, writing letters to political representatives, and having conversations with neighbors.

After spending the last few years traversing the West Coast, back and forth to Hawaii, covering most routes west of the Rockies, the crew will reassemble the boat in Hudson, Wis., in September before to tackle the big loop.

“We don’t just terrify people, we give them hope by giving them a way to act,” Jaccard said.

In 1958, four Quaker peace activists set sail for the Marshall Islands aboard the Golden Rule, attempting to interfere with United States nuclear bomb tests taking place there. After he was intercepted and arrested in Honolulu, the public outcry helped spark a broader anti-nuclear movement, which eventually culminated when President John F. Kennedy signed the 1963 Treaty Banning Atmospheric Nuclear Weapon Tests. , in outer space and underwater.

After the boat was sold to a private owner and eventually sunk in Humboldt Bay in 2010, local Veterans for Peace members, Quakers and Northern California boat enthusiasts came together and restored the rule gold to resume its original mission.

“They realized it was the perfect vehicle with a history of consistent opposition to nuclear weapons over a long period of time,” Johnston-Kitazawa said. “History shows that pressure has been applied and change has happened. It is time to continue this work.

The crew is unsure of the origin of the boat’s name.

“While the captain in 1958 wrote a book about his trip, he didn’t mention why he was named so,” Jaccard said. “But that’s my assumption: ‘Don’t bomb other people that you wouldn’t want to bomb yourself.'”

Johnston-Kitazawa and Jaccard say the push for nuclear disarmament is more relevant than ever, as Russia continues its invasion of Ukraine, tensions remain high between India and Pakistan and threats have arisen between the United States and North Korea.

“Right now everything is falling apart and the big three nuclear powers are all bragging about what they’re going to get more of and what they’re going to be better at,” Johnston-Kitazawa said. “I think people are even more aware now that maybe we should have taken care of them all instead of becoming complacent.”