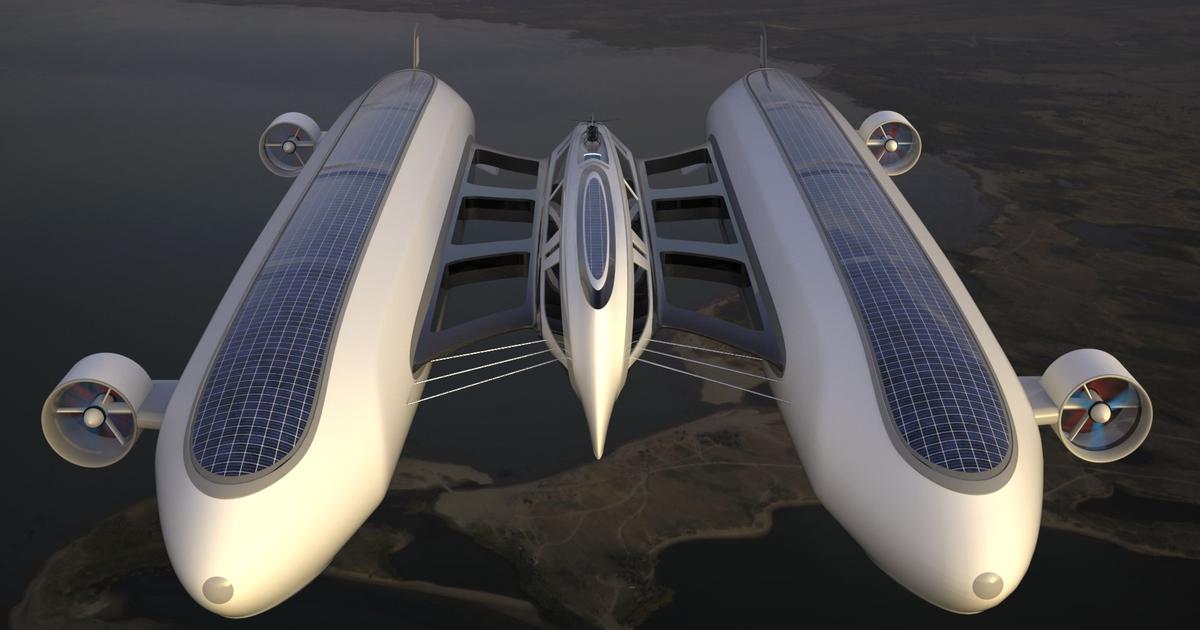 Pierpaolo Lazzarini is no stranger to pushing the boundaries when it comes to design concepts – whether it’s swan-inspired superyachts, crab-inspired catamarans, retro-futuristic flying cars or a city of floating pyramids. . Its latest effort, the Air Yacht, is designed to cruise the sea or skies in style, supported by twin helium-filled airships.

Eschewing the traditional big-balloon airship design, the Air Yacht is more like a giant catamaran, with two 492-foot-long (150 m) airships connected to a 262-foot-long (80 m) center deck via four carbon bridges on each side. The central deck is 10m wide and houses a master cabin with a 360 degree view, a large dining room and a living room. There are also windows on the outer edges of the airships, each containing five private cabins.

These twin carbon fiber airships also feature a honeycomb of cells, or “hives”, which contain 14.1 million feet3 (400,000 m3) of compressed helium allowing the craft to fly at 60 knots (69 mph, 111 km/h) for more than 48 hours, with eight counter-rotating electric rotors on the sides powered by ultra-lightweight batteries and adorning solar panels the tops of the airships.

The engines would also spin to push the airship down and land on water, with helium depressurization and a ballast anchor system keeping it on the water, where an “inflatable basement” keeps it afloat and allows it to travel at a speed of 5 kn (6 mph, 9 km/h). There’s also room for an optional (and why not!) helipad on top of the center deck to allow for travel to places that can’t accommodate a massive amphibious airship.

Lazzarini is not targeting tour operators with the design, but rather private owners. Considering the €550 million (US$629 million) asking price for such a vehicle should it materialize, that might be a pretty limited market – especially since most billionaires these days seem invest their money in vehicles that go a little higher. Still, none of that stops it from being a gorgeous design.