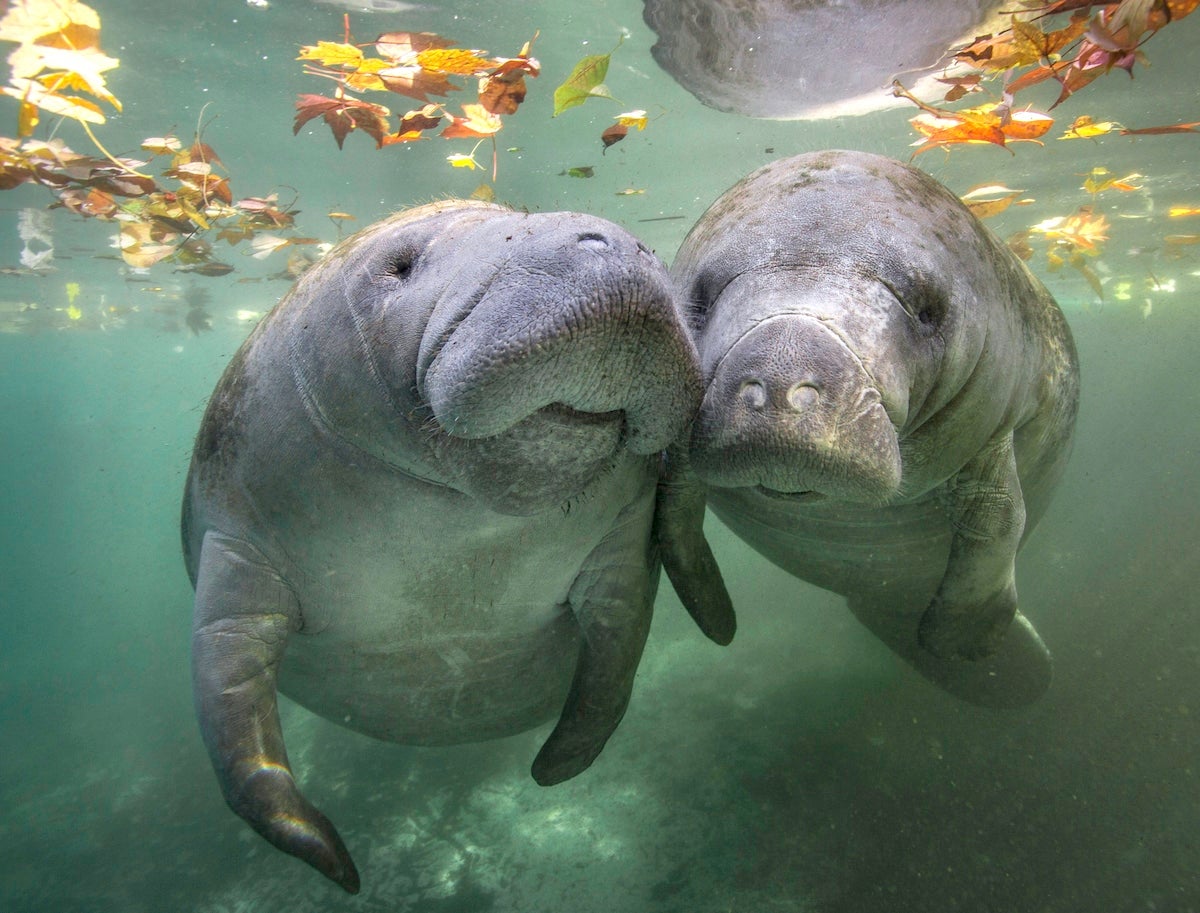 Manatees, large herbivores that adorn the world’s coastal marine waters, estuaries, rivers, swamps and marine wetlands, are gentle creatures often referred to as “sea cows.” Their enormous size – an average manatee is ten feet long and weighs 1,200 pounds – might remind you of their closest relative, the elephant.

According to Ocean Today, manatees are important to maintaining ecosystem health because of their love of seagrass beds. Their constant munching on seagrass and other aquatic plants – and they eat a lot of them – keep the grasses short, helping to keep the seagrass beds healthy.

Manatee species that exist today include the West African, Amazon, and West Indian manatee, as well as the Florida manatee, which is a subspecies of the West Indian manatee. All sea cow species are classified as vulnerable to extinction. The endangered manatee is Florida’s official marine mammal.

Even without true natural predators, manatees have become endangered due to habitat loss and being struck by boats and ships. In Florida, water pollution has destroyed the manatees’ natural food source, leading to the death of many.

A recent review of fossil evidence suggests that there were once many types of sea cows and that various species co-existed at once, according to a Duke University press release.

In a new paper, scientists Steven Heritage of the Duke University Lemur Center Museum of Natural History and Erik Seiffert of USC’s Keck School of Medicine, which is also a research affiliate of the Duke Lemur Center, put together the account rendering the most complete ever. of sea cow ancestry.

“The earliest known fossil sea cows date to around 47 million years ago, and these animals lived along the coasts of North Africa in the Proto-Mediterranean Sea,” Heritage said in the press release. “Our analysis revealed that this first appearance was about 11 million years after the sea cow lineage diverged from their closest living relatives, the elephants.”

The article, “Total Evidence Time-Scaled Phylogenetic And Biogeographic Models For The Evolution Of Sea Cows (Sirenia, Afrotheria)”, was published in the journal PeerJ.

Throughout the long history of sea cows, the coasts of every continent on Earth except Antarctica have been enriched by the friendly sea mammals, the press release says. Once, there was even a species of sea cow that weighed 12 tons swimming in the Bering Sea.

The oldest known sea cow fossil had four legs and was able to walk on land like an elephant. The oldest fossil ancestors of elephants were alive in North Africa during the early Cenozoic era, just after the extinction of the dinosaurs.

Today’s manatees and their relative, the dugong, both of the taxonomic order Sirenia, live exclusively in water and have no hind limbs.

The largest dataset to date on living and fossil sea cow species has been assembled for the study. It incorporated geography, genetics, anatomy, and geologic time periods.

“Our models suggest that the direct ancestors of manatees evolved in mainland South America and that the migration of manatees into the Caribbean and to the coasts of North America was a relatively recent event,” Seiffert said in the press release. hurry. “In a sense, manatees are newcomers to these western Atlantic ecosystems.”

The common ancestor of today’s sea cow species descended from a major transatlantic migration to the southern part of North America and the Caribbean from the eastern hemisphere around 34 million years ago.

At the time, during the transition from the Eocene to the Oligocene, the climate cooled rapidly and sea levels plunged. Many marine and terrestrial animal species disappeared during this period.

Subsequently, the ancestor of today’s sea cows that lived in the Eastern Hemisphere declined and eventually died out. Relatives of sea cows that had settled in the Western Hemisphere around the start of the Oligocene era led to large numbers of species that persevered, sometimes in multi-species communities.

In their exploration of sea cow evolution, the study partners found that between 23 and five million years earlier, during the Miocene period, at least three of the Caribbean sea cow lineages moved into the Pacific Ocean, before Central America and South America were joined.

The colossal cold-water species, Steller’s sea cow, was a descendant of Pacific migrations. The enormous sea cow could grow up to 33 feet, but was hunted to extinction soon after European naturalists arrived on the Bering Sea islands in the mid-18th century.

Heritage and Seiffert said the greatest assortment of sea cow lineages existed around 22 and 16 million years ago. However, the amount of lineage has declined sharply over the past nine million years, leaving us with the limited number of peaceful and endangered species currently swimming and floating in suspension in our oceans.

The 24 Pokémon movies ranked from worst to best