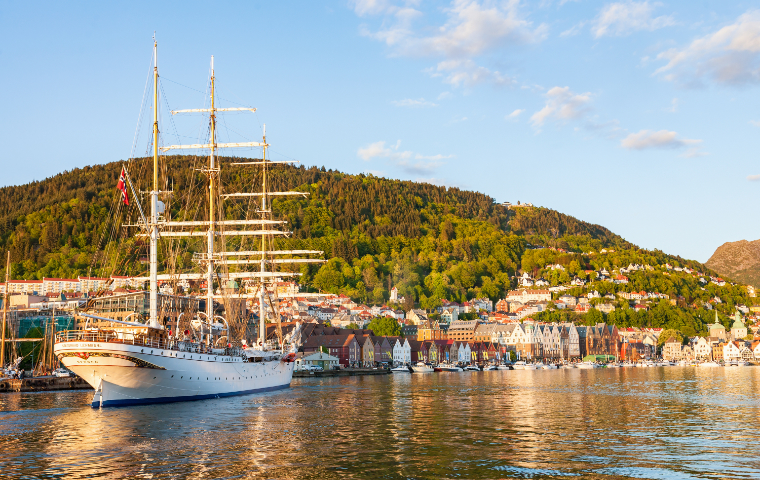 The university at sea embarks to go around the world

Bergen’s tall ship Statsraad Lehmkuhl sets sail on Friday August 20 from Arendal in Norway and will sail around the world for 20 months. The One Ocean Expedition will be a ‘University at Sea’, aiming to raise awareness and share knowledge on the crucial role of the ocean in global sustainable development, and to unite people from all over the world in the process.

The event is part of Arendalsuka, Norway’s popular political-science festival, which will be held again this year after being canceled due to the 2020 pandemic. In 2019, the festival brought together around 100,000 people and hosted more than 1,200 events. It is modeled on Swedish Almedalsveckan and has been fitted out since 2012.

One Ocean Expedition – “the floating university”

The One Ocean Expedition will be a “university at sea” that brings together students, scientists, leaders and people from all over the world, said Haakon Vatle, CEO of the Statsraad Lehmkuhl Foundation, in an introduction video present the project.

“We are going to be a powerful voice that can inspire people to get involved in working for cleaner and more sustainable seas,” he said.

The project was launched by Norwegian Prime Minister Erna Solberg in August 2020: “I find the One Ocean to be a fantastic project as it provides a platform to discuss many of the great challenges we have been engaged in around the oceans with people from all over the world. world.

“We need more people who develop knowledge and commitment to the oceans. It was therefore obvious for the government to enter into cooperation with the One Ocean project.

“The oceans are the key to reaching many [development] goals related to poverty, hunger, energy and health. But the oceans are also under great pressure from climate change, loss of biodiversity, overfishing and pollution, ”she said.

“One Ocean brings together scientists, young people, governments, businesses and civil society around a collection of common knowledge about the sea. They will learn from each other and from the experiences they share on a cruise. either in Havana, Valparaiso or Fiji. This will make them dedicated ambassadors for clean, healthy and productive oceans for the future, ”Solberg said at the launch.

The One Ocean Expedition begins August 20, 2021 and lasts until April 2023. During those 20 months, Statsraad Lehmkuhl will cover 55,000 nautical miles and visit 36 ​​ports around the world. The ship will regularly send hospitality reports to various schools and higher education institutions.

On each of its 36 port visits *, the research team will participate in public events and meetings to share and discuss their findings and make connections. “The ship will be used for conferences, high level meetings and corporate hospitality,” Vatle said on the video.

According to the expedition’s website, “the main objective is to raise awareness and share knowledge about the crucial role of the ocean for sustainable development from a global perspective.”

The expedition will conclude with One Ocean Week in Bergen on April 15, 2023, and with an international week organized by the Bergen City Hall with courses, conferences and workshops related to marine research.

The expedition is a recognized part of the United Nations Decade of Ocean Science for Sustainable Development.

The ship is equipped with modern instruments and will collect high quality data on the physics, chemistry and biology of the oceans throughout the voyage. Anyone can follow the shipment online, and parts of the shipment will be open to paying passengers. Some legs are exhausted, but some are also available for booking.

The round-the-world trip is organized in such a way that different collaborating partners rent the ship during the different stages of the voyage. The University of Bergen, the Norwegian Institute of Marine Research, the University of Applied Sciences of Western Norway (HVL) and a total of 13 Norwegian research institutes and ministries are participating in the project, which represents a financial investment of 180 million. NOK (US $ 20 million) to NOK 200 million (US $ 22 million).

“Most of these legs [of the journey] are now rented and, for example, the [Norwegian] The Marine Research Institute subcontracts the ship from Havana to Nassau; students of the Bjerknes Center [for Climate Research] at the University of Bergen, Harvard University and the University of the West Indies and several more are entering the ship in the Caribbean; the Nansen Center takes the ship from Maputo to Cape Town; while the Norwegian Polar Institute takes a stopover from Ushuaia to Puerto Montt, ”said Vatle Khrono, the Norwegian University’s online newsletter.

In November of this year, the University of Bergen postgraduate course “Field Course in Climate Action: Causes, Consequences and Solutions to the Climate Challenge” will take place as the ship sails from Curaçao, via Kingston, to Havana, Cuba.

Then, from May to August 2022, a new interdisciplinary course on sustainable development at the University of Bergen – Ocean, Climate, Society – will take place aboard the Statsraad Lehmkuhl as the ship crosses the Pacific Ocean from Valparaiso to Palau.

The course is open to students of the University of Bergen and dedicated partner universities who have obtained at least 60 ECTS (European Credit Transfer and Accumulation System) points. The course will be open for applications between September 1 and September 30, 2021.

* An overview of the route and tickets are available here.