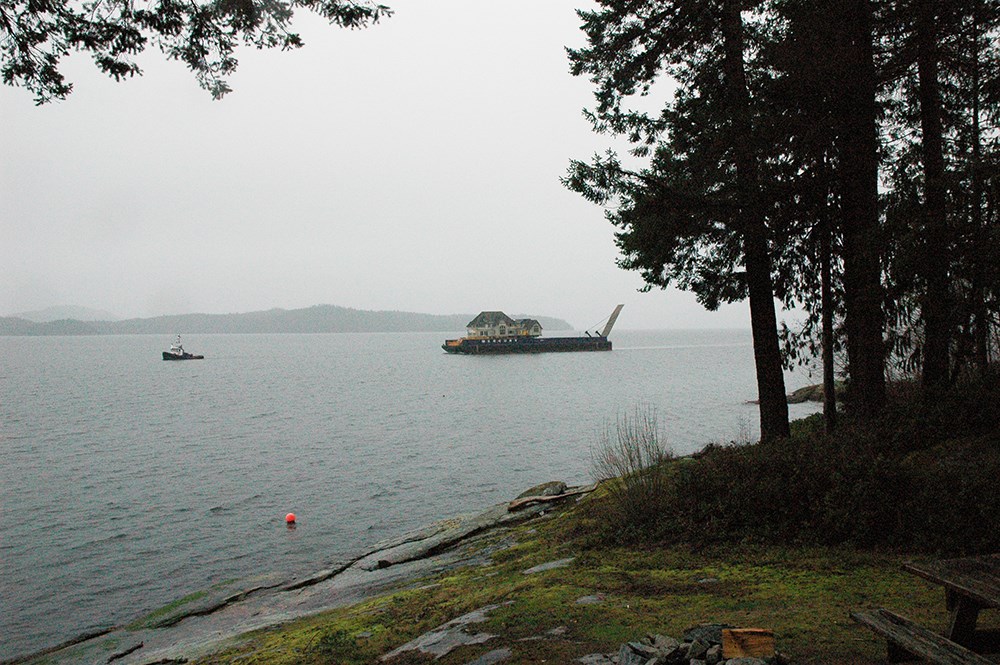 Transporting the house to the qathet area requires a massive barge

In a marvelous feat of engineering, a grand 1935 Tudor-style house has made its way from Oak Bay in Victoria to a waterfront property at Paradise Cove near Saltery Bay.

Towed by Nickel Bros from lower Vancouver Island to the qathet area, the move went smoothly.

Eva Stuart, the new owner of the house, said she became interested in the house because of its style. She said she and her late husband, who died last September, bought the house together.

“We both liked the classic look,” Stuart said. “We have a lot of antiques and this house suited our taste. It might be a little bigger than we would need, but that’s how it turned out.

The house has a beautiful style and looks, according to Stuart. She said it was previously located on the beachfront in Oak Bay.

“Our property is also on the water, so it’s definitely built for the waterfront,” Stuart added. “I can’t wait to live there.”

Stuart said she and her husband moved into their Paradise Cove property last August. When they struck a deal for the property last May, they began looking for a home that could be redeveloped.

The perfect house was found on the internet, on the Nickel Bros.

“We’ve been keeping tabs on the Nickel Bros. website for some time,” Stuart said. “Rather than building, which is very expensive and time-consuming, especially with the shortage and price of materials, we decided to buy a recycled house. It was just a matter of finding the right one. It’s absolutely perfect.

Stuart said she and her husband moved to Powell River last August from Abbotsford to live in the Tudor house.

“We sold our farm,” Stuart said. “We had 60 acres and we moved here. It’s a nice community here and I really like it. I wish my husband was still here. He would have been very excited about it. He was also an entrepreneur, so he would have been in his element with this new house.

“They didn’t go the extra mile for me, they went miles and miles,” Stuart said. “They worked non-stop to put this house on a lot in very unfavorable conditions.

“They had to wait until 4 a.m. for high tide and the wind was quite strong so the barge was difficult to keep stable, but they made it. We were all exhausted, but it was worth it.

Stuart said people need to know that there are options other than building in terms of owning a home.

“You can recycle a house,” Stuart said. “You can have a nice house. If no one had bought this house, it would have gone to the dump. For me, to replace this house with a new one, the cost would be at least three times that of this one.

Given its age, the house even has accommodation for a butler, Stuart said.

“Guess I’ll have to look for a butler,” she laughs.

Nickel Bros general manager Casjen Cramer said the move was complex, given the size of the residence.

In order to remove the home from Oak Bay ownership, Cramer said Nickel Bros needed to map the Oak Bay seabed. They went so far as to have divers in the water and used lines out of the barge to put anchor points on the rocks to micro-adjust the barge to its final position.

The barge used for the move is massive and has a 70-foot ramp. Deck space is 54 feet by 240 feet. The house weighed 220 tons with the mobile machine underneath.

Cramer said there were two other houses on the barge that came to the qathet area along with the Tudor house. He said that the winds are the sworn enemy of the movers and that they had a big blow on the day of the delivery. He added that throwing a 40ft high building on the barge is like having a sail.

“We were within four hours of the move being canceled due to wind,” Cramer said.

However, conditions calmed down to the point where the move could be made. It took two hours to get the barge into position for unloading at Paradise Cove.

Cramer said the house was unloaded on Stuart’s property in the early morning hours of February 27 at the pre-excavated site. A foundation must now be built to support the residence. Once the foundation is built, the company will come back to lower the house onto the foundation.

In terms of the size of the house that was moved, Cramer said it was in the top five percent.

“There were two months of planning and two months of execution,” Cramer said. “The move went without incident. The interior has some cracks in the drywall but the house is in perfect condition. Eva is delighted.