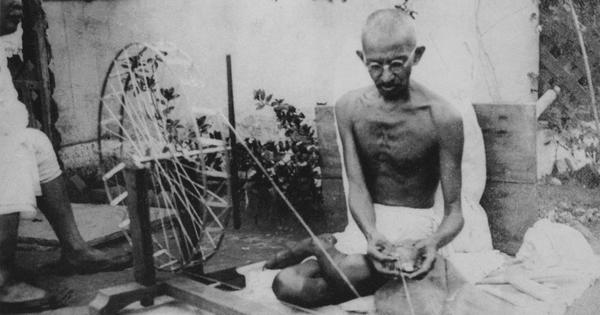 “Anyone who owes their oxygen to the pump is dying. Is it any wonder that India is in agony? ”

It would not be unreasonable to assume that these lines were written by someone deeply agonized by the deaths of thousands of Indians during the second wave of Covid-19 in April and May. It turns out that these phrases actually appeared in Young India July 6, 1921. They were written by Mohandas Gandhi. A few months later, on March 5, 1922, he again used the metaphor. “India is not getting enough oxygen and feels suffocated,” he wrote in Navajivan.

Gandhi’s invocation of this image of breathless people appeared shortly after India was devastated by the influenza pandemic that began in 1918. It rocked the country in four waves before ending in 1921. David arnold estimates that 12 million Indians – 5% of the country’s population – have died in the pandemic. As with Covid-19, the flu affected the functioning of the lungs.

The pandemic has also affected Gandhi’s family, killing Gulab, the wife of his son Harilal. “I felt sad for a moment when I learned that your family had the flu and that there had even been a death,” he wrote to his eldest son on November 23, 1918. “But such news pouring in from everywhere, so that now the mind is hardly affected.

Three years later, Gandhi traveled across India to urge people to expand their support for the Tilak Swaraj Fund, which aimed to raise 1 crore rupees to support the cause of freedom. To convey the idea of ​​autonomy, he used the image of a person able to breathe without needing an oxygen pump.

Almost a hundred years after Gandhi wrote these words, the Modi regime adopted “atmanirbhar” or autonomy as one of its main axes. Unfortunately, it has been shown to be unable to ensure an adequate supply of oxygen to tens of thousands of people suffering from Covid-19.

Gandhi’s premonitory use of the oxygen metaphor to educate Indians about India’s worsening crisis under colonial rule continued to be relevant in 2021 when the country faced real scarcity. oxygen, with disastrous consequences.

As families of Covid-19 patients run desperately from pillar to post for access to oxygen cylinders, some leaders have covered up the true scale of the problem. In April, Adityanath, Chief Minister of Uttar Pradesh claimed there was no shortage of oxygen or hospital beds in the state. He said police would take action under the National Security Act against “anti-social elements” spreading rumors of an oxygen shortage. This meant that anyone who complained of a lack of oxygen became vulnerable to punitive lawsuits.

As a result, the Uttar Pradesh police decided to prosecute a young man named Shashank Yadav who desperately tweeted a demand for oxygen for his grandfather: “Need an oxygen cylinder ASAP”. However, police claimed his statement was misleading as there was no shortage of oxygen.

Yadav’s brutal muzzling evoked memories of Gandhi’s speech at the Congress session in Ahmedabad on December 28, 1921, when he described freedom of opinion and freedom of association as “the two lungs absolutely necessary to a man to breathe the oxygen of freedom. ”.

He clarified: “If there is an authority in this country that wants to restrict freedom of expression and freedom of association, I want to be able to say on your behalf, from this platform, that this authority will perish.” , unless she repents, before an India strengthened by great courage, noble purpose and determination, even though all the men and women who choose to call themselves Indians are erased from the earth. ”

In November 1931, when the Federal Structure Committee met in London, Gandhi had oxygen in mind again. British suggestions for provincial autonomy separate from key responsibilities were like a doctor trying to pump oxygen into a dying body, he said. Warning that the oxygen pump in this situation would produce no results, he feared a greater crackdown on people from the British authorities.

However, he asserted, “the crackdown has never hurt a single nation that is sailing towards its goal with fixed determination, because this crackdown is truly a breath of fresh air …”

When Narendra Modi held a meeting last week to review India’s oxygen availability ahead of an expected third wave of Covid-19, he would have done well to read an article written by Gandhi in Navajivan written on September 16, 1928, in which he spoke of the compassionate treatment given to cattle in Ahmedabad by a Jain company.

Gandhi said that compassion should be as wide as the ocean. “… As the oxygen which sustains life spreads its scent of the ocean at all hours of the day, the oxygen of compassion should do the same and give happiness, peace and good health to sentient beings. humans and all other living things, ”he wrote. .