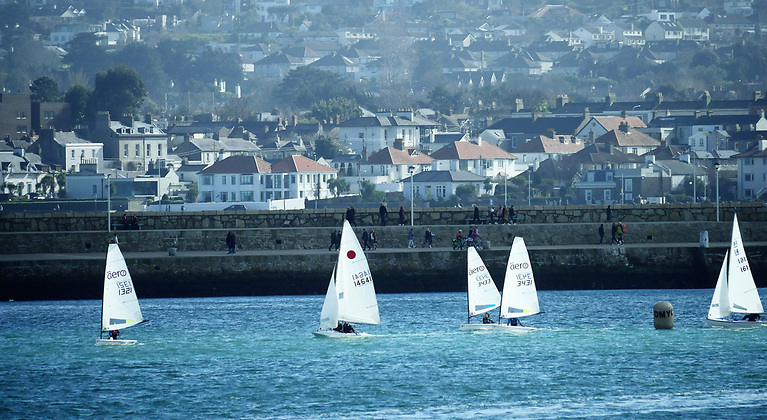 Most winter dinghy leagues operate a PY (Portsmouth Yardstick) handicap system to allow multiple dinghies of different shapes and sizes to race together.

The Aero has proven to be one of the best under this handicap system with wins and placings for Eros all over Ireland.

The fleet of 50 DMYC Frostbite PY boats is one of the largest and most diverse in Ireland with a strong contingent of well sailed Fireballs, Eros and IDRA 14s, GP 14s, Konas and Wayfarers. The largest fleets are the Fireballs and Eros which, in lighter conditions, race boats against each other. In the heavier air, the fireballs push hard to make up for their time being chased by the Eros – everyone trying to maximize planing on the flat water of Dun Laoghaire Harbour. After 23 races, the RS Aero 7s have taken the first 3 places. Brendan Foley (RstGYC) finished first with 45 points, followed by Mark Gavin (RstGYC) with 110 points and Stephen Oram (NYC) with 113.5 points. 4th was the well sailed Fireball of Frank Miller and Ed Butler (DMYC) and in 5th was Sarah ‘Skinny’ Dwyer (RstGYC) in her RS ​​Aero 5.

There were some great runs in the races for the Eros which had 15 boats entered including size 5, 7 and 9 rigs. The number of races at DMYC Frostbite rewards consistency but some of the fleet over of winter was drawn to the trip with Noel Butler (NYC) and Roy Van Maanen (GSC/RstGYC) choosing to take part in a few events in beautiful Italy with great success, while Mark Gavin (RstGYC) brought his Aero 7 at the Malahide Yacht Club dinghy event on St Patrick’s Day which he won on PY handicap.

The PY format that works well in winter continues at RS Aero Summer events where all rig sizes compete, allowing competitors to race their preferred rig size. The local Dun Laoghaire Aero fleet, which now has 15 members, will race under PY in the DBSC Summer Series.

Which way to go around the island? – Ireland’s Eye race as part of HYC Frostbite. Photo: Sarah Dwyer

The recently completed Howth Yacht Club Frostbite series sponsored by Key Capital saw RS Eros join the long-established Laser/ILCA fleet for the first time. The three HYC based Eros all sailing on the seven rig enjoyed a fantastic winter of sailing. The Laser fleet kindly allowed the small Aero fleet to start alongside it, but raced in separate fleets rather than with a PY handicap. John Phelan won the pre-Christmas winter series glassware and Daragh Sheridan won the spring event.

As usual, the winter season ended with the annual Howth Yacht Club race around the island. The unique event closing its fiftieth edition saw 43 boats entered and the inclusion of a Portsmouth Yardstick fleet competing for the first time. The fleet took to the water to enjoy a ‘warm-up’ race in relatively mild conditions before the main event produced a high-speed spin around the island in a rising breeze. The distinctive event format is simple, a short Windward Leeward race to get competitors afloat and finalize their race strategy for the ‘big’, followed by the RTI itself.

After a wonderful day of sailing around the spectacular island, the sailors disembarked for lunch at HYC followed by the awards ceremony and the Ireland v England rugby match on TV. The PY class results on corrected time saw the Eros take the top three spots. Roy van Maanen (Greystones SC) first in a 5 rig, just ahead of Daragh Sheridan (HYC) in a 7 with Sarah Dwyer (RStGYC) third in her 5.

The organizers of the HYC hope to see a much larger attendance at the PY next year following the success of this first edition.

Sunday visitors to Ballyhome, Bangor (NI) in winter will see a large number of disabled PY boats racing past the club in the sheltered waters of Ballyholme Bay. The author can attest that this is a tricky place! A series of permanent marks are dotted around the bay. The first mark is upwind and after that a course map should be consulted as navigation, tactics and boat speed are required to do well. With a land breeze, some local sailors know which streets the wind will descend on and take advantage of the added pressure.

Ballyholme has a thriving Aero fleet with 12 boats, mostly 7s and a few 5s. In the Icebreaker series the top two spots overall were taken by the Lasers 2000s while 3rd, 4th and 5th were Brian’s Eros respectively Bibby, Robin Gray and Christina Cunningham (all Aero 7s). Both Brian and Robin are in the Grand Master and Legend age groups, showing what a great boat the Aero is for a wide range of ages, sizes and abilities. Ballyholme will also be the host club for the National Aero Championships on 14th and 15th May 2022 where a large fleet is expected and excellent hospitality will be given.

Contact the class association via www.rseoireland.ie for details of races in your area or for advice on buying an Aero. We would love to see you on the water.