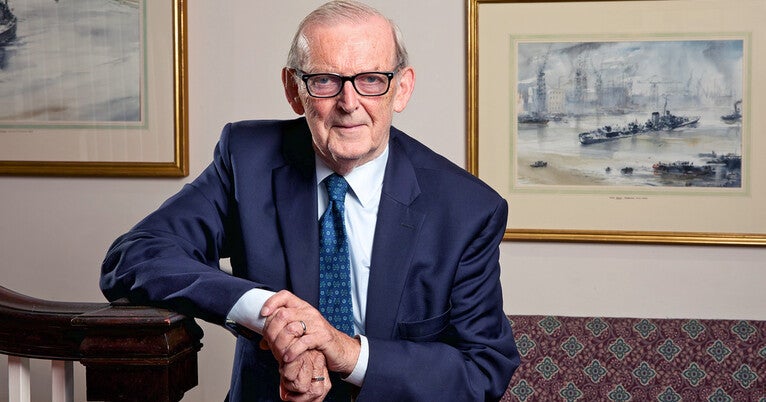 Since the start of World War II, Kriegsmarine submarines had threatened Allied shipping in the North Atlantic. By mid-March 1943, packs of wolves had ravaged two supply convoys bound for Britain, destroying more than 30 freighters, while losing a single submarine. As a result of this lopsided exchange, Prime Minister Winston Churchill expressed doubts to his War Cabinet that Britain’s naval resources were sufficient to defeat the submarine wolf packs.

But the attack on ONS-5 in the rough seas off Newfoundland turned out differently. While the U-boats inflicted casualties, they also suffered heavily in return. The convoy escorts sank seven submarines and seriously damaged seven others.

“What happens on the night of May 5 is truly transformative,” said Paul Kennedy, J. Richardson Dilworth Professor of History at Yale School of Arts and Science, whose latest book, “Victory at Sea: Naval Power and the Transformation of the World Order in World War II(Yale University Press), a lavishly illustrated history that follows the fortunes of six great navies during the war, describes changes in naval warfare, and documents the rise of American economic and military power.

Kennedy recently discussed the new book at a conference at the Jackson Institute for Global Affairs at Yale, where he serves on the faculty.

A new, soup-dish-sized device had helped the Allies turn the tide in the Battle of the Atlantic, Kennedy said. Allied warships and aircraft protecting the ONS-5 convoy were equipped with a new miniaturized radar that allowed them to spot submarines in dense fog and darkness and attack them with depth charges . Two postdoctoral physics researchers from the University of Birmingham invented the miniaturized radar, and Bell Laboratories in the United States mass-produced the devices.

The innovation brought misery to German U-boat crews, Kennedy explained. By 1942 the Germans had lost 87 submarines, a sustainable number given the rate at which Germany was producing new ships. The following year, the number of German submarines sunk soared to 244. In 1944, the Allies destroyed 249 U-boats, according to statistics presented in the book.

“In all of naval warfare, it’s hard to find a better example of new technology making an immediate difference in combat,” Kennedy says in the book.

“Victory at Sea” blends Kennedy’s narrative with statistical tables, detailed maps and 53 eye-catching watercolors by the late marine artist Ian Marshall depicting events and warships described by the author. Kennedy credited Yale University Press with distributing Marshall’s paintings throughout the book rather than compiling them in inserts as is often done in nonfiction volumes.

In developing his narrative, Kennedy applied an analytical approach that the French historian Fernand Braudel developed for his 1949 two-volume masterpiece “The Mediterranean and the Mediterranean World in the Age of Philip II”. In these books, Braudel analyzed history through three levels of causality: a basic level which included geography and climate, a middle level focusing on changes in technology and commerce, and a higher level concerning events. , such as large battles.

“Could you do Braudel in the mid 20’sand century?” asked Kennedy. “I was going to fall for that.”

In addition to sharing the story of ONS-5 during his speech, Kennedy referred to a second major turning point that led to the triumph of Allied naval power: the addition of Essex-class aircraft carriers to the Allied Navy fleet. Pacific in mid-1943.

While many military historians claim that the Battle of Midway in early June 1942, in which four Japanese aircraft carriers were destroyed, gave the Allies momentum in the Pacific, Kennedy noted that in 1943 five of the six aircraft carriers that had formed the nucleus of the American fleet at the start of the war had been sunk. America’s ability to design and quickly produce improved warships and aircraft enabled it to dominate the Pacific by the end of 1943, Kennedy claimed.

The USS Essex, the first carrier of her class, arrived in the Pacific with her full complement of aircraft, including the new Grumman F6F Hellcat fighter, in June 1943. The second carrier arrived in July. A third in August and so on, Kennedy said.

“By the end of 1943, when the United States was finally ready to go on the offensive, the United States Navy had 10 to 12 new aircraft carriers and thousands of aircraft to continue the fight,” he said. declared. “It’s an amazing transformation and I really wanted to find out why and how it could happen.”

In one of the book’s appendices, Kennedy traced the production chain of the Hellcat fighter from the mining of bauxite – the ore needed to produce aluminum – in the then Dutch colony of Suriname, to the production from aluminum at Alcoa’s refineries in Tennessee, to parts manufacturing in East Hartford, Connecticut, to building airplanes at the massive Grumman plant in Bethpage, Long Island.

“The end result of this wartime production story was that unsurpassed Pacific War fighter and fighter-bomber, the Grumman F6F Hellcat, with its aluminum-clad airframe, lighter than steel and capable of enduring blasts. huge damage from enemy machine gun bullets. Kennedy writes in the book.

The assembled Hellcats were flown to naval bases in San Diego and Long Beach, Calif., and assigned to newly built Essex-class aircraft carriers, which then embarked for Pearl Harbor, he noted. .

“Naval historians, I’m afraid to say, especially those who describe actions in the Atlantic and the Pacific, don’t really care about that background story,” he said.

By the end of the war, the United States led all other nations in warship production, a trend that continued into the Cold War, according to a chart shared by Kennedy during his speech.

He ended his presentation with examples of the paintings of Marshall, who died in 2016. One – Kennedy’s favorite – depicts the victorious Allied fleet in Tokyo Bay in 1945. The mast of the battleship USS Missouri dominates in the foreground as that Mount Fuji looms on the horizon.

“Victory has come,” Kennedy said of the scene. “It’s over for the Axis powers now because they couldn’t face a power that had such enormous production potential. But it took time, it took six years of war in the oceans.

The University of Nevada, Reno, will offer a new degree program in risk management and insurance