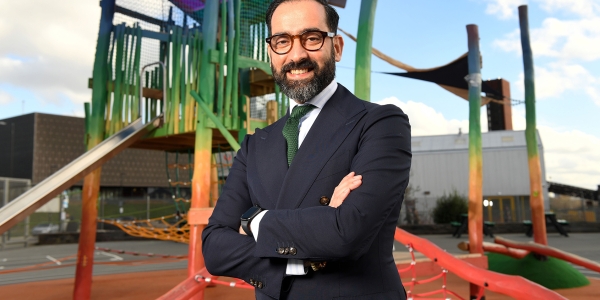 Your 10 questions with… Mohsen Ojja

Mohsen Ojja is aacting chief executive of Federation Mossbourne in Hackney, east London, which comprises four schools and a sixth form college. Prior to taking on this role, he was Director of Crest Academies and National Director of Education at E-Act.

He spoke with Tes about his own experiences in education, which influenced his career, and why he would want to be the last Education Secretary the nation will ever have.

1. Who has been your most memorable teacher and why?

If I think of one teacher in particular who really marked my experience, there was a physics teacher in Austria who was very different from the others because he didn’t dress the same way.

We didn’t have a uniform but he dressed very cool and I don’t know if that coincided with my uncomfortable teenage phase, where I was always looking for something different, but he was very funny and not very formal.

He also had a very interesting way of bringing physics to life and making it quite easy to understand – and I continued to major in physics during my undergrad.

But we all thought he was a spy or an ex-spy…because in one lesson we were learning nuclear physics and he started talking about how his previous work as a nuclear physicist in Iran had helped him solve a particular problem.

We all looked at each other and said, “Did he really just say that?” So I said, “Did you just say you worked in a nuclear power plant? He said, “Yes, I was a French engineer.” So we had a theory that he was a spy!

2. What were the best and worst things about school?

One of the great things about my experience at school was that, from the very beginning, I accepted difference.

For me, being different was normal. From the age of five, I had Asian, black, Latino, Spanish, French and Tunisian friends. I sat next to people from different continents.

I didn’t realize at the time that it was a very privileged position, but I think the acceptance of difference meant that I was more aware of it as a young child and more tolerant.

The other thing was languages. English is my fourth language and I can alternate between French, Spanish and Arabic – and some German since I was in Austria.

But that’s also kind of a negative too, because unlike most of my friends now, I didn’t have a high school experience where I can say I grew up in this town or city, that I’m went to the local school and developed roots there. And that, sometimes, is missing.

I also struggled with the transition sometimes between schools. In Morocco, it was very loose and easy; we had a surf club on Saturday morning. But then we moved to Austria and it was very dark, very cold and I was like, “What’s going on?”

At school too, it was suddenly very formal and very aristocratic, and it was fascinating to make this change but I struggled with the transition – because you also had to find a new cohort [of friends].

3. Why do you work in education?

I felt that I needed to do something that would benefit me in the sense that it would make me feel good. If I had to work hard, I wanted something that was rewarding beyond income.

And my dad’s story is a powerful example of what education can do because he’s the reason I was able to access and experience what I went through.

My father comes from a very poor background in Morocco and he was destined to work in the fields and sell in the market.

But he challenged that by completing his studies and that meant he was able to enter a profession. [as a diplomat] which allowed him to travel the world and offer us what he offered.

So, I have experienced firsthand how education can transform people’s lives, and I sincerely believe that everyone is entitled to a good start in life – education provides that.

4. What are you most proud of in your career?

If I have to focus on just one recently…when I joined the federation one of my priorities was to support Mossbourne Parkside Academy near Hackney Central Station.

This school was never ‘good’ so whatever denominations they had with Ofsted it amounted to ‘satisfactory’ – it was the best she had ever achieved.

He was stubbornly underachieving, but having worked with parents, teachers, senior leaders and governors – and seeing how quickly we turned him around and got a “good” rating, so we can say to the community, “you can get a good level of education” – that’s great.

5. What would be your perfect school staff room?

I thrive on quick conversations with people and I think, working in an environment like Mossbourne, the leaders here are absolutely phenomenal. It’s not always easy, as great leaders are very demanding and have very high expectations, but I would definitely say Mossbourne Federation Team Leaders. I’m very lucky to work with people who are phenomenal.

6. Who in education has influenced you the most?

First, I have to mention Dame Joan McVittie, whom I met in 2015 when I started at The Crest Academy. His wisdom and guidance were phenomenal.

She taught me a lot, and her coaching and mentoring was quite important. She embodies the kind of wisdom in nurturing that I think we all need at some point – that no-frills person in front of whom we run things.

Then the other one is Matt Jones. Matt is the executive director of the Globe Academy, but not only is he really committed to it [role]he also created The Elephant Group.

For him to put his money where his mouth is – and start the charity and recruit a team and lead a charity that operates across the country – is truly inspiring.

7. What are the best and worst aspects of our school system today?

The best thing about the system is the recent focus on curriculum and pedagogy, and how it has really changed mindsets to focus on what matters in schools.

The implications of saying “curriculum matters” led more teachers to talk about curriculum design, implementation, and curriculum impact. This is what counts to give the best chances to the students and to have the best schools.

The worst thing about the system, unfortunately, is that despite everything going well, the range of quality is very wide – you still get poor quality pockets, especially in the communities that have the most need.

8. If tomorrow you became secretary of education, what would you do?

I would like to be the last politically appointed Education Secretary because I believe education is too important and has too lasting impact to be left to just one individual.

But what I would establish is a clear set of school standards for a good education – fully funded, fully funded – that includes not only aiming for good grades, but beyond – so fees for extracurricular activities, for a high quality athletic program, and a coaching program that goes beyond school subjects, so if you want to pursue a career in medical education, you are supported to do so.

Then schools would meet or not meet that standard. It’s simple – either you meet their required standard or you don’t.

So if you’re a medical student, you’re not ranked first, 2:1, etc., because patients don’t want to know you just graduated. Instead, you must meet the standard required to practice. I think the same should be true for education – asking, “Are schools meeting the standard?”

If it’s yes, that’s great, and if it’s not so good, then we deploy the resources to make sure they can meet the standards. That’s what I would do.

I would like to think that the conversations that are happening right now about curriculum and pedagogy will continue to enrich the profession, so we are reaching a point where the profession is much more qualified and autonomous,

Because if we really want teaching to be a profession, we have to reach that point where, because of [teachers’] knowledge, because of their specific expertise, they can dictate what needs to happen.

10. What are the most important lessons you learned in this role?

For me, the biggest lessons are that I became a better teacher and leader once I was clear about who I was, what my values ​​were, what drove my actions day in and day out, and what I wanted.

There’s so much noise around education – there’s Ofsted, there’s the Department for Education, there’s Covid, there’s parents, there’s local authority – but once I was able to anchor it in my values, my non-negotiables; once I was very clear about what I wanted – I think that was the biggest lesson for me.

And the other is that nothing can be achieved in education as an individual. As a leader, it’s about knowing what you want and who you are, and accepting that no matter how big your ego, you can never achieve everything on your own.

Mohsen Ojja was talking to Dan Worth

Get the biggest education stories of the week straight to your inbox every Friday with the Your journal newsletter. Simply log in or create a free Tes profileso visit your preference center and check the ‘newsletter magazine’ option